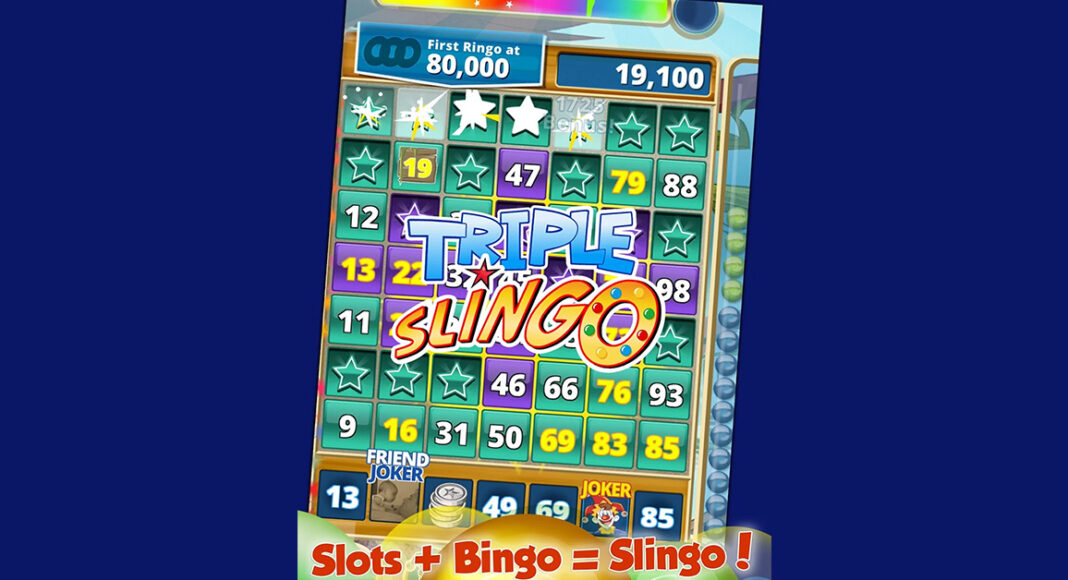 The global success of the online casino industry is hard to miss. Traditional casino games like Poker, Roulette, Blackjack, Craps and Baccarat have become mainstays on many people’s smartphones for their easy to learn rules, forgiving learning curve and their ‘pick up and playability’.

Convenient, casual games are perfect time-fillers for people’s modern, on-the-go lifestyles. People who don’t have time to dedicate extended sessions to their chosen entertainment medium and as a result, casual games dominate app stores. The genre that has perhaps transferred most successfully from the casino floor to the smart device is slots.

There’s something about the simple slots reels game mechanic that is infinitely adaptable for developers and keeps players coming back for more. One such development within the slots arena is Slingo which, as the name suggests, combines the best elements of slot machines and Bingo into one exciting game.

Developed by a New Jersey real estate developer in 1994, the game was an instant hit and has since cultivated a flourishing corner of the industry all of its own. You can find libraries of dozens of slots titles as well as Slingo games at trusted operators like Rainbow Riches Casino .

We take a look at the rules of the game, how to play and what makes Slingo so fun so you can get started on your Slingo adventure today.

Some Slingo titles become quite complex and involved but at their simplest, they bear much in common with a slot machine that you’ll likely be familiar with. Start by setting your stake with a value that you’re comfortable to play with.

You will be allotted a grid of random numbers that will resemble a Bingo card (usually 5×5) and, like Bingo, the object is to check off each number in the grid. In Slingo, however, instead of a caller announcing the numbers, they are decided by the fate of the reels of the slot machine.

When you’re ready hit the spin button and watch as the action unfolds. You will be allocated a certain number of spins in which to complete your card.

Aim for a complete line first, either horizontally, diagonally or vertically. Successfully doing so will offer a prize – check the value of each prize on your chosen game since they vary.

The great thing about Slingo compared to conventional slots games is that each round lasts for many spins of the reels whereas the fun of slots can often be over in a single turn. For this reason, Slingo is more suited to people that prefer extended gaming sessions.

A common feature of many Slingo titles is the inclusion of the Joker symbol. When a Joker lands on the reels, you can choose any number in that column to check off from your grid.

Jokers are especially useful when you’re getting close to completing a line but that specific number just isn’t appearing – they can signal a real turn of fortunes. Devil symbols are the anti-jokers and depending on your chosen game will either block numbers for that turn or reduce the player’s score.

A Super Joker is like a Super Wild and allows the player to select a number from anywhere on the grid – not just the column where it appears. Super Jokers are handy in the last few spins of the game when the grid is close to completion.

Free Spin symbols do exactly that and award an additional spin to the player. A coin symbol or any three Jokers that appear in a single spin will result in an immediate cash prize.

If at the end of the game you’ve not won or you’re close to completing another line or the grid, you will have the option to buy additional spins. Each additional spin will become more expensive to buy so you’ll need to weigh up the risk and rewards of continuing each time.

There are tens of Slingo games to choose from, each with their own theme, minigames and graphics, and each with their own twist on the concept. It’s crucial to read the rules of your chosen game thoroughly before wagering any real money so you know exactly what you’re playing.

Most reputable operators offer free-play options to players so you can trial the games before parting with any cash and we recommend you take advantage of this. Even for seasoned Slingo aficionados, it’s a good idea to take some time in free-play to warm up before playing the real thing.

Some of our favourite Slingo titles:

In this official collaboration with the hit TV show, the Bingo grid is replaced by the iconic red boxes which reveal their value when opened up. You’ve even got your own money ladder displaying what prizes remain – it’s almost as good as appearing on the show.

A classic playing Slingo game wrapped up in a polished, modern neon aesthetic. Great graphics, immersive music and sound design, and smooth animations make this one perfect for lovers of Slingo yearning for a new look.

One of the most popular slots titles gets the Slingo treatment. A new twist on the trancey, intergalactic soundtrack accompanies this great game with all the familiar feel of the seminal video slot.

If you’ve not played before, hopefully this guide will get you on your way to taking your first steps into the exciting world of Slingo.