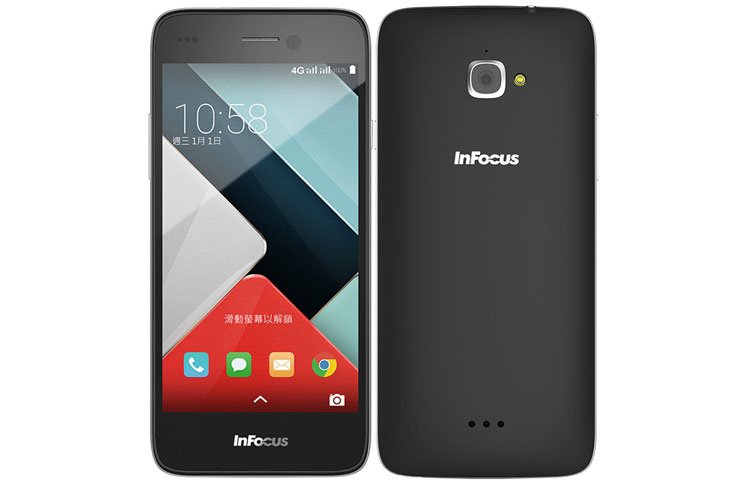 InFocus mobiles are a popular smartphone brand in South India. They are slowly trying to capture a piece of the pie up north as well. We have seen few good devices by them in the past and one of their most recent launches is the M350 android smartphone. They passed one unit to us to run through our test bench and this is what we found out about this nifty little device.

The InFocus M350 is available in white, black and golden colours. We received the black unit for review and quite liked it’s built. The phone’s black back panel is grippy and one can hold the phone nicely. A silver metal trim runs around the sides of the phone, which adds to the show.

The InFocus M350 has a 5-inch display. This HD IPS capacitive display comes with 16 million colours. This mobile is 10.6mm thick and weighs 146g. Which might seem a little heavy on papers, but we did not mind the bulk at all. It is very comfortable to use, even with just one hand.

Under the rear removable plastic panel, there is a non-removable battery, two Micro SIM card slots and a Micro SD card slot. The power button is located on the right side of the phone while the volume key is located on the left. The USB port is located at the bottom of the phone and the 3.5mm headset jack is positioned at the top of the mobile phone. The speaker vent is situated on the back’s lower part. The primary camera is on the top right (rear) of the mobile phone, which comes with the LED flash.

The InFocus M350 has a 1.5GHz Quad-Core processor that comes with 2GB of RAM. Together they try to make the applications and services run as smoothly as possible. The users also get 16GB of internal memory (12GB available) to store files. And there is also the option to add up to a 64GB microSD card to amass additional documents. All this runs on the MediaTek MT6732 chipset that is 64-bit capable.

For graphics a Mali-T760 MP2 GPU is also on board. There is also HTML5 for browsing. The primary camera of INFocus M350 comes with auto focus function and can capture 8-megapixel still images. For selfies, there is also an 8-megapixel secondary camera. The rear and front camera captures very decent pictures, but it struggles a bit in low light. Macro shots on the other hand were quite good.

The phone did not break a sweat when we played power hungry apps and mid-end games on it. But, when it comes to graphic hungry games the phone lagged a bit. Also, the game loudspeaker volume could have been better. Talking about which, we faced no problems when it came to audio and call quality on the InFocus M350. Screen, image and video quality is also above average and we quite liked what we saw.

Coming to its battery life, the InFocus M350 has 2,500 mAh non-removable battery inside. It worked for 17 hours straight after a full charge (under nominal use).  We tested the phone with Quadrant and it managed to score 9,872 points, which is a nice score for this mobile phone that falls in the mid-segment of smartphones.

The InFocus M350 has some great features in it. This mobile phone has an impressive display and the mobile screen is smudge resistant. It comes preloaded with MeituPic, Dropbox, WPS Office, Facebook apps etc. The experience was quite smooth throughout. Only if instead of the Android 4.4.4 KitKat, the company would have given Android 5 Lollipop, the deal would have been drool-worthy. One can get this smartphone for Rs 7,999 at any online retail store.

Sahiba Sethhttp://www.gadgetbridge.com
Sahiba Seth is a student, pursuing English (Hon) from Delhi University. She has been a trainer of HYTSE (Helping Youngsters To Speak English) in her school. She loves to interact with people and she is crazy about gadgets like mobiles and cameras. She likes to read and search about gadgets, and their features. She loves to stay in tune with the happenings of Hollywood and Bollywood. Also, she is passionate about reading novels and creative arts.
Facebook
Twitter
WhatsApp
Linkedin
ReddIt
Email
Previous article
ASUS unveils the latest ASUSPRO ADVANCED BU201 and BU401 Ultrabook
Next article
Xiaomi announces Mi TV 2S and Mi Water Purifier