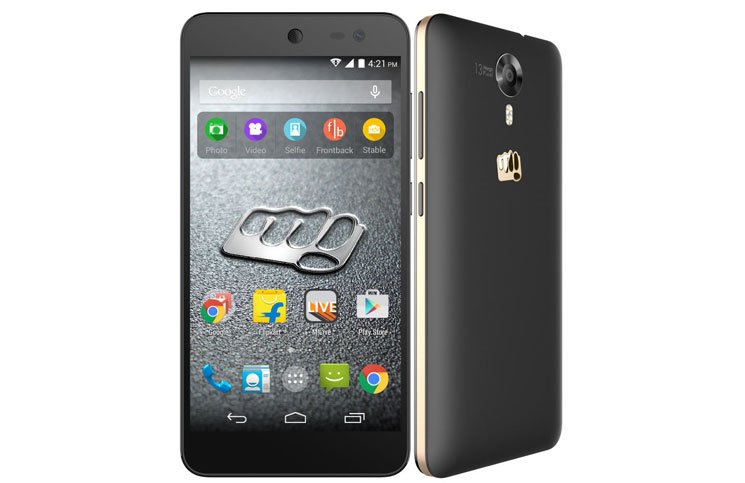 Micromax, the Chinese smartphone manufacturer has got yet another budget smartphone in the Indian market. Called the Micromax Canvas Xpress 2, we got to review it recently and it surprised us quite a bit. Here is our take of the phone.

The Micromax Canvas Xpress 2 is available in black colour. The phones black rubberised back panel is grippy and one can hold the phone nicely. The black panel has a golden metal rim along the sides that gives this phone a stunning and stylish look. Even the Micromax logo on the back, is in golden colour. Over that, the circular camera ring at the back also has a golden thread around it that shines under the light. Together, the gold does add to the theatre of the device. Overall, the design is pretty competitive.

The Micromax Canvas Xpress 2 screen has Corning Gorilla Glass 3 over a 5-inch HD IPS display. This HD IPS capacitive display comes with 16 million colours. The mobile phone is not that heavy and is very comfortable to use, even with just one hand.

Under the rear removable plastic panel, there is a battery that can be removed, two Micro SIM card slots and a Micro SD card slot. The power button is located on the right side of the phone along with the volume key. The USB port is located at the bottom of the phone and the 3.5mm headset jack is located at the top of the mobile phone. The primary camera is on the top right (rear) of the mobile phone, which comes with the LED flash. A neat pair of headphones also come in the box for music lovers.

The Micromax Canvas Xpress 2 has a 1.4GHz true Octa-Core processor that comes with 1GB of RAM. Hand in hand, the duo tries to make the applications and services run as smoothly as possible. The users also get 8GB of internal memory to store files. And there is also the option to add up to a 32GB microSD card to add more files. All this runs on the MediaTek MT6592M chipset.

For graphics a Mali-450 is also on board. Other features include accelerometer sensor, proximity sensor, ambient light sensor and gyroscope sensor. The primary camera of Micromax Canvas Xpress 2 comes with auto focus and can capture 13-megapixel still images. For selfies, there is a 2-megapixel secondary camera. The rear camera captures very decent pictures. Macro shots were also quite good. Other photography modes are also present in the smartphone like frontback which captures front and back images at the same time. Micromax Canvas Xpress 2 also has a Flipboard style feature called Quick Look, which aggregates news, weather and social media feeds. We were able to play most apps and high-end games on the phone without any hassles. But, the games loudspeaker volume could have been better. Talking about which, we faced no problems when it came to audio and call quality on the Micromax Canvas Xpress 2. If you want good personal sound quality then we suggest you use the supplied headphones, as they are great for personal resonance. Screen, image and video quality is also above average and we quite liked what we saw.

Moving on to its battery life, the Micromax Canvas Xpress 2 has 2,500 mAh interchangeable battery inside it. It worked for 22 hours straight after a full charge (under nominal use).  We tested the phone with Quadrant and it managed to score 11,648 that puts it right in the middle of the pack.

The Micromax Canvas Xpress 2 is built for the youngsters. It has the Android 4.4.2 KitKat OS, which can get upgraded to Lollipop OS. It comes with a lot of preloaded apps such as Housing, CleanMaster, Apps Center, M!Live, Scandid, Start, SwiftKey, Chaatz, Newshunt, Quikr and Hotstar app. The experience was quite smooth throughout. The company has priced the Micromax Canvas Xpress 2 for Rs 5,999 and is exclusively available on Flipkart.

Sahiba Sethhttp://www.gadgetbridge.com
Sahiba Seth is a student, pursuing English (Hon) from Delhi University. She has been a trainer of HYTSE (Helping Youngsters To Speak English) in her school. She loves to interact with people and she is crazy about gadgets like mobiles and cameras. She likes to read and search about gadgets, and their features. She loves to stay in tune with the happenings of Hollywood and Bollywood. Also, she is passionate about reading novels and creative arts.
Facebook
Twitter
WhatsApp
Linkedin
ReddIt
Email
Previous article
Karbonn brings the new Titanium Mach Five at Rs 5,999 in India
Next article
Microsoft rolls out its Outlook app for Apple Watch