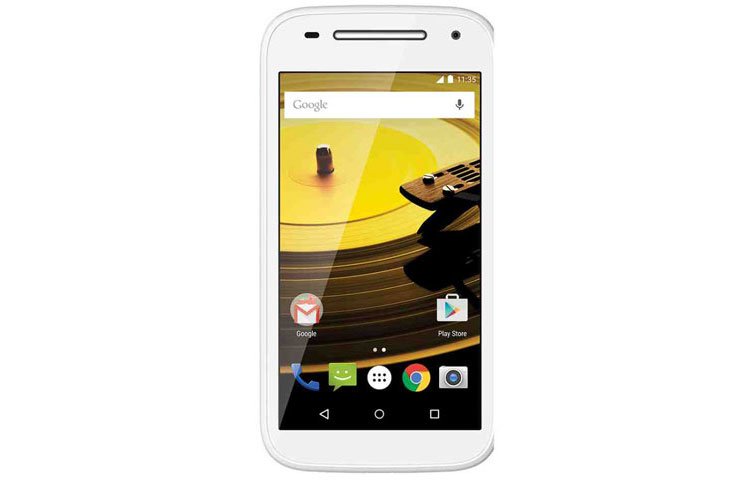 Motorola has made quite a remarkable re-entry in the Indian market. They were down and out; however with the new innings they have launched some great phones and accessories in India to capture a decent chunk of the pie. Last year we saw the Moto E from the brand and it was a fabulous device. Now they have launched the second version of the phone, which is not a significant upgrade over the previous one, but does get the job done.

The Moto E second gen is available in two colours, black and white. We got our hands on the white one and right of the box we fell for it. Yes, some might say it is a bit chunky or fat, but we didn’t mind it one bit. This mobile has a nice feel to it and the white colour gives it the edge.

The battery is locked in. Hence users cannot replace it by themselves. Moto E  second gen can accommodate two Micro SIM cards. The slots are well hidden under the detachable band, which runs all around the phone. The MicroSD card slot is also placed under the same band in between the two SIM slots.

Moto E second gen has a 4.5-inch IPS qHD display, which is slightly bigger than the last version. However, the resolution of the phone is much lower than what its competition is providing. Above the screen, consumers will find the front camera for selfies and at the back Motorola has incorporated a 5 MP shooter (without flash). 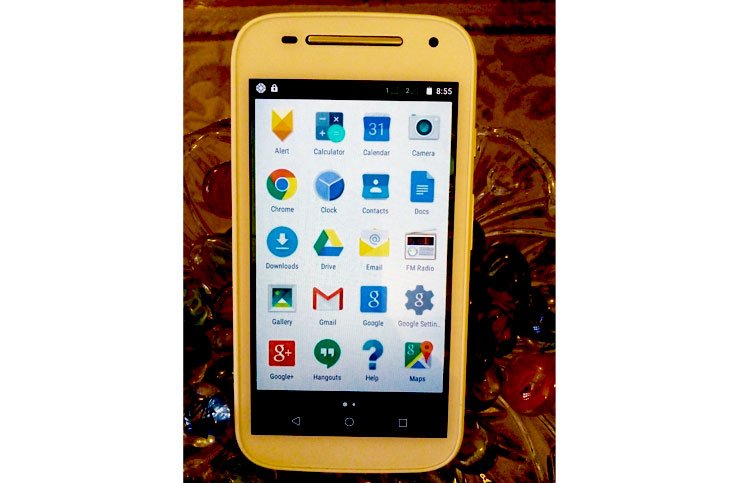 The power button is located on the right side of the phone along with the volume key. The USB port is located at the bottom and the audio port is available at the top. Audio port on top always works for the younger generation. The phone is aimed towards youngsters and we all know what they love to do, listen to a lot of music. People can easily slide the phone in the front pocket and listen to music using the headphones, which come with a nice long wire.

Moto E is not a power house when it comes to under the hood performance. However, it does justify its price. Moto E second gen has the Qualcomm 1.2 GHz CPU that comes along with 1 GB RAM and 8 GB internal memory. Out of which users only get about 5 GB to store files. For graphics an Adreno GPU is also installed on board.

We didn’t face any challenges as far as basic entertainment needs were concerned. The place where the phone stresses a bit is gaming. You can’t play high-end games on it. Power hungry utilities also run a bit slow on this phone.

On the other hand Music apps and video galleries ran beautifully. Talking about which, the audio quality is very fine. The supplied headphones get the job done and one can hear the beats clearly. Screen, image and video quality is above average.

We tested the phone out with Quadrant and it managed a score of 9,522 points. Not the best in the class, but is pretty much up there. Camera quality of the phone is not too shabby, when clicked in well lit rooms and outdoors. It becomes a bit sloppy in low light and dark areas. Front snapper is just about fine for selfies. You do get noise in pictures if the light is low.

Moving on to its battery life, Moto E second gen does manage to stay awake for a long duration. With 2,390 mAh battery inside it, we did get between 20-24 hours after a full charge (under nominal use). It will go down by couple of hours if you are using Wi-Fi network as well.

Moto E second gen is definitely built for the masses. The voice quality is very good and you rarely end up missing a note, unless your mobile network is acting up. We did like the built quality and the looks. It has the latest Android Lolipop OS with stock apps. If users want to download more app on this phone they can do with the Play store. The price also plays a huge factor here. The Moto E second gen can be picked up for Rs 6,999. Not a bad price for this package. The 4G version of the phone is now available too and one can get that for Rs 7,999 from FlipKart.

Not built to play high-end games

Sulabh Purihttp://www.gadgetbridge.com
Sulabh Puri is the Editor In Chief of GadgetBridge.com. A content specialist, he started his career young and it has been a rewarding 15 years for him. Before heading Gadget Bridge, he was the Editor of Times of India (TOI) Technology and GadgetsNow.com. He has also led TOI’s international edit arm as the Editorial Head of Business Insider India and Tech Radar India. He has also worked with various media houses such as the India Today Group and Cybermedia. He loves everything ‘gadgety’ and enjoys tinkering with new tech toys and automobiles. A graduate in commerce from Delhi University, he is also an adept graphic designer. When he is not working, he can be found in the kitchen, cooking mouth-watering chocolate cakes and croissants.
Facebook
Twitter
WhatsApp
Linkedin
ReddIt
Email
Previous article
4G services from Airtel to go live in Delhi
Next article
Spice launches Stellar 519 4G at Rs 8,499