We fiddled with the Optoma UHD55 projector and this is what we could make of the new 4K projector. 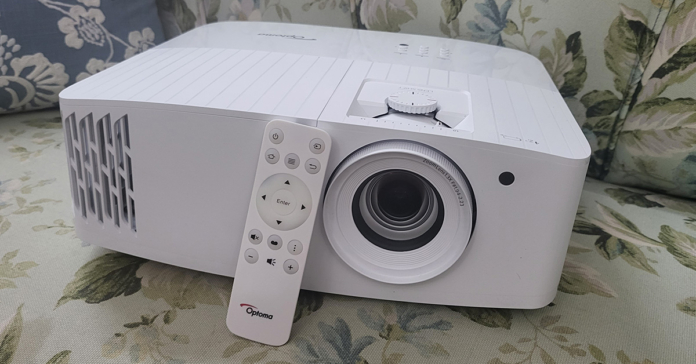 Optoma has quickly grown to become a brand that has made a name for itself here in India and overseas. The latest to come from the brand is a True 4K projector that might look like a simpleton in the world of projectors but provides serious imagery. This is the Optoma UHD55 projector review you should not miss in case you are in the market to buy a very good high-end projector.

Let’s quickly get the design aspects of the Optoma UHD55 projector out of the way. Out of the box, the projector might look simple, but it actually is not. Adorning the usual pearly white colours you see most projectors dressed in, this one has subtle differences. For starters, the mesh grille is cut out in a different angular manner. This does add to a bit of a show. 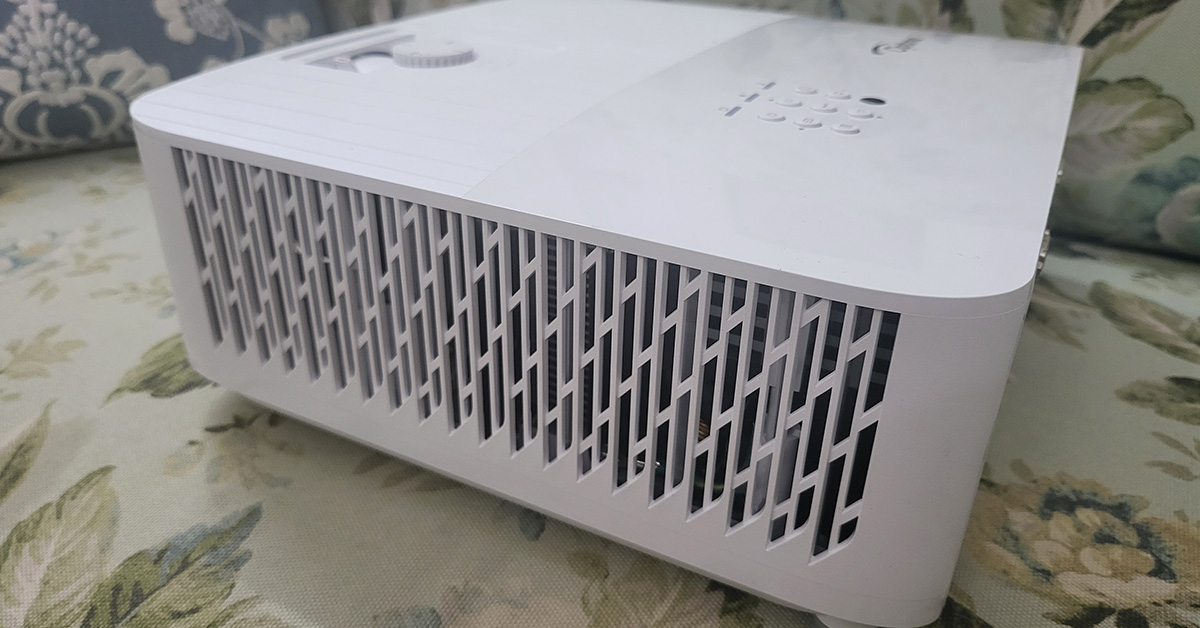 You get the lens zoom, lens shift knobs on the top along with the power, keystone correction and other useful buttons. To raise the Optoma UHD55 projector a bit (when kept on flat surfaces) the company has put a raise stand below it. Up front, you will find the large lens along with an IR receiver. 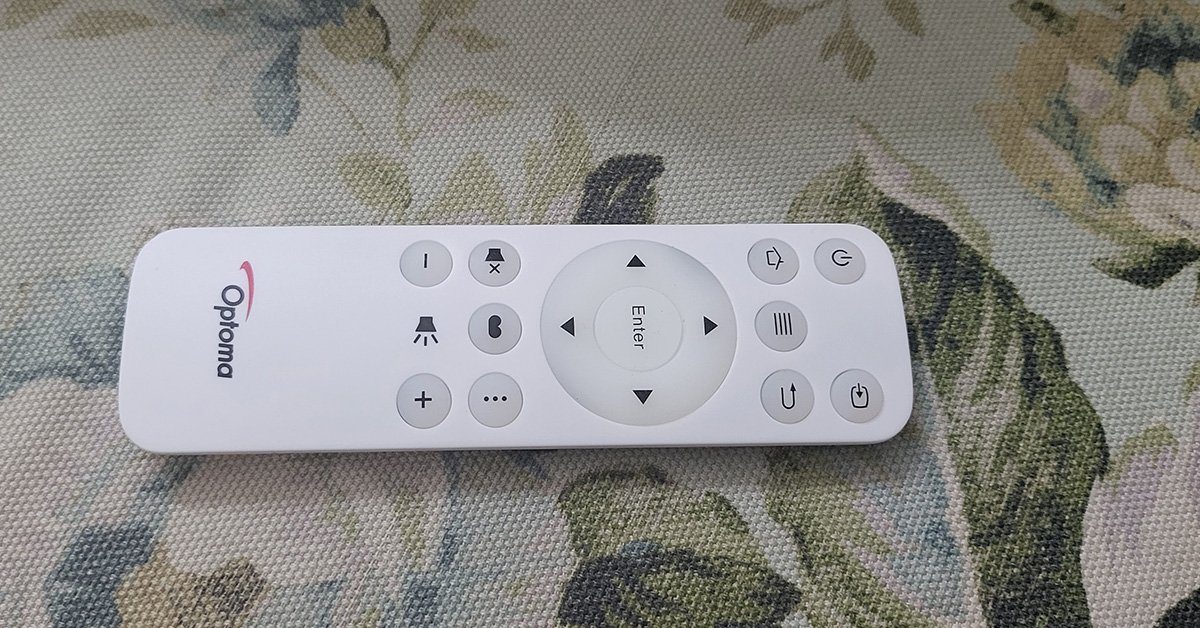 Turn it around and you will get to see a plethora of ports. These include a couple of HDMI, a few USB 2.0, Ethernet, VGA, audio in and audio out ports. The power-in port is also available here. A unique feature of the Optoma UHD55 projector is that the first USB port is a power OUT (5V) port, which can also be used to charge your gaming console’s gamepads. With that, a 10W speaker is also hidden behind the grille of this projector. More about this in the next section. 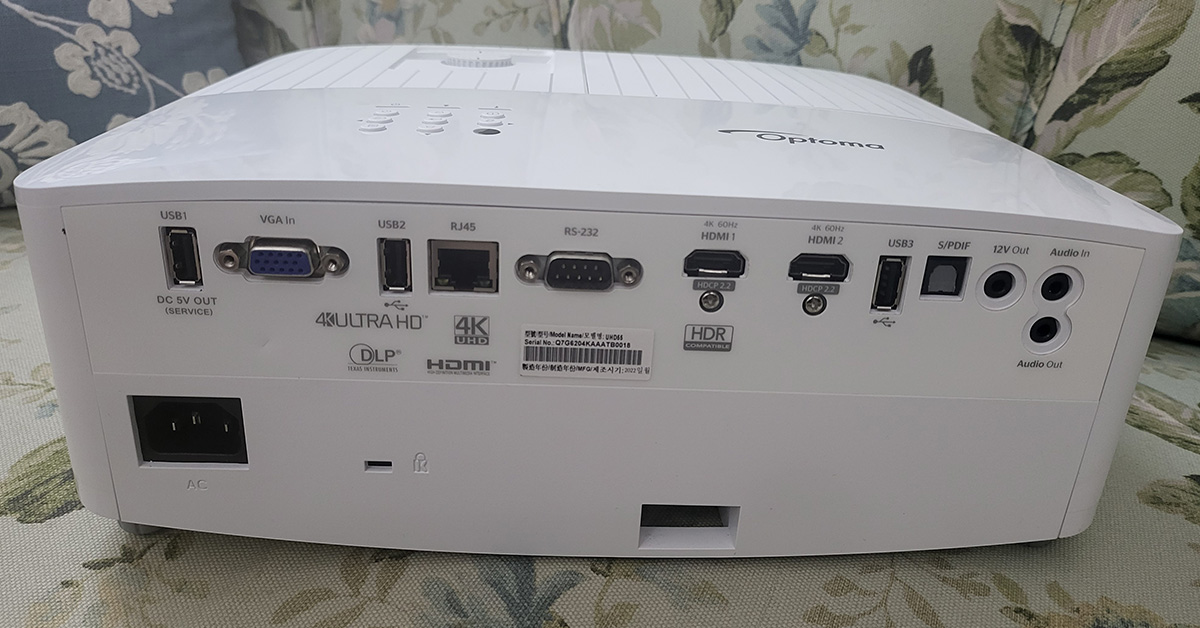 A minimalistic-looking IR remote also comes with this projector with all the essential buttons and it works from as far as 50 feet, when we tested it out. All in all, the Optoma UHD55 projector is a very decent-looking device that can easily be placed on a flat surface or roof mounted.

Moving to the fun part, it’s performance. We had a lot of fun reviewing the Optoma UHD55 projector. As the name suggests it truly is UHD and can hex out some great graphics and moving pictures no matter what type of wall or screen you are watching on. The projector supports 4K videos with HDR10 support and HLG. This enhances the colours of the videos and everything including sports and video games look vibrant.

Talking about which, we connected our gaming consoles to the Optoma UHD55 projector via HDMI and we loved every bit of it. However, the 4MS input lag and 240Hz refresh rate is available only in 1080p mode. If you bump the imagery to 4K the refresh rate drops to 60Hz, which is a bit unsatisfactory, but the graphics become much better. For casual gaming it is fine, in case you want to play pro, then we suggest playing in 1080P mode. 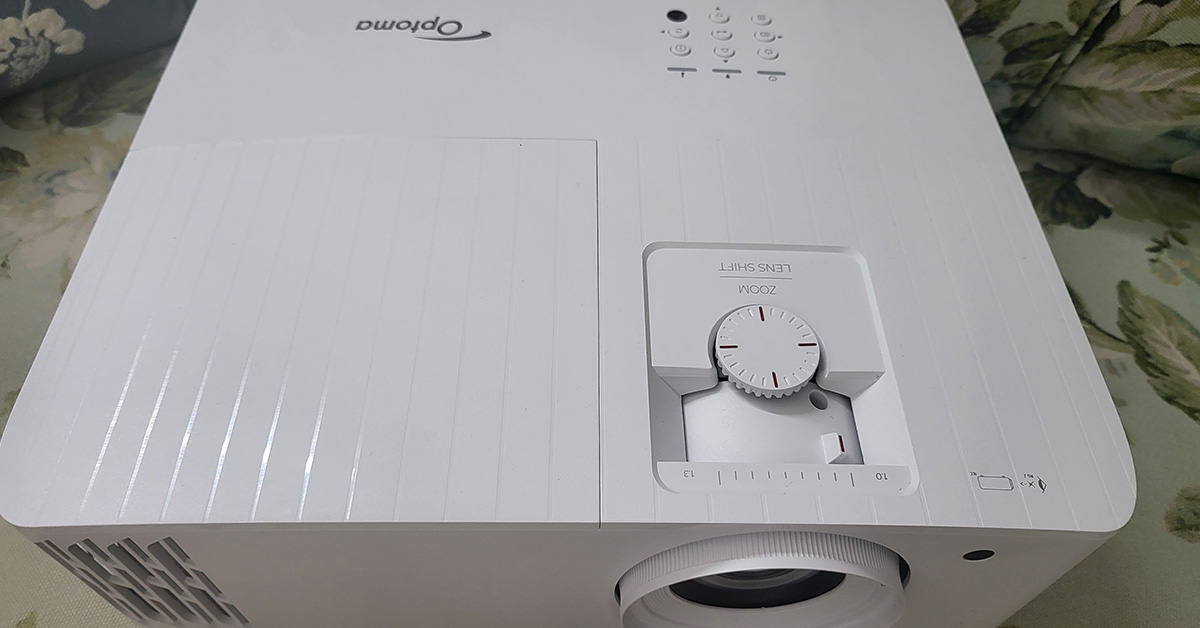 Setting it up was child’s play and we were up and running in 5 minutes. Up to 302-inch screen size is supported. We kept ours at 120-inch and oh boy! everything looks very good. The Optoma UHD55 projector comes with a 10W speaker also inside, which is decent for small rooms, but you will need extra speakers if you want to feast on the full power of this projector. The throw distance is also not very high, and the keystone correction works flawlessly. You can easily control it through the onboard button panel or with the supplied remote.

Over that, the Optoma UHD55 projector also has its own OS running, which has an app store, file manager and more. We did not use it much as the connected gaming console and our HDMI Chrome cast provided us with flawless options. In case you do not have it, you can easily use the Android-based UI Optoma provides.

We played Netflix as well as YouTube shows and videos on the Optoma UHD55 projector and it never gave us a chance to bicker. We were surprised by how deep the blacks are on the projection and the colours stayed vibrant even on an off-white wall. Digital zoom of 125% is also available on this projection, however, we do not recommend it, just place the projector a little farther away from the wall and you will be fine.

In addition to that, Optoma claims that the projector has high durability of 15,000 hours, which is great. It can be your partner in the living room for years to come. The power consumption of the Optoma UHD55 projector is 210W, which basically most good 4K projectors consume these days. 3D imagery is also supported via this projector, however, the 3D glasses are not part of the package. With extra ports on its back, you can connect multiple devices to it easily, too.

Overall, we were very happy with the Optoma UHD55 projector. We found the contrast ratio of 1,200,000:1 also works well in its favour. Yes, a few things could have been better like a higher frame rate in 4K gaming mode, but we had no complaints with the 1080p mode. So, is worth picking at Rs 2,95,000? If you have a large wall in the living room or are building a home theatre, you can easily get this one, it will not disappoint you for years to come. Just add good speakers to the mix and you will be very happy.

Small and minimalistic design for a 4K projector

Price is not for everyone

Samsung Galaxy Watch 5 Pro review: Is it an ideal smartwatch?

- Advertisment -
Optoma has quickly grown to become a brand that has made a name for itself here in India and overseas. The latest to come from the brand is a True 4K projector that might look like a simpleton in the world of projectors but...Optoma UHD55 projector review: Oh, what a wonderful experience!