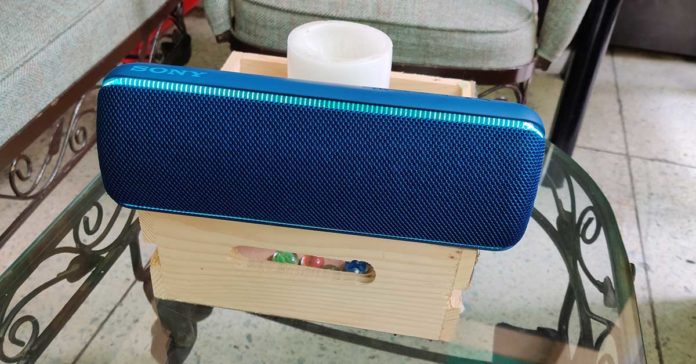 First thing out of the box, we found it to be on the heavier side of things. The small size is deceiving. But then, we dug deep into why is it so? It is because this BT speaker has an extra-large battery inside and the whole shell is made to last an impact. So yes, the weight of just under a KG is justified. Will talk more about that in a moment, let’s first talk about its looks and design.

The Sony SRS-XB32 Bluetooth speaker is built to perfection. Available in 3 colours – Red, Black and Blue, we reviewed the last one. The front has a set of 48MM audio drivers behind a mesh type grille, which gives it the edge. But what takes the cake are the set of LED light strips that run around the front façade and sides of this speaker. It looks exceptional and one would love to turn these on in parties. The light strip can be controlled with the help of the Music Centre and Fiestable apps. A lot of colour options can be chosen from and our favourite is white, as it just pops out. 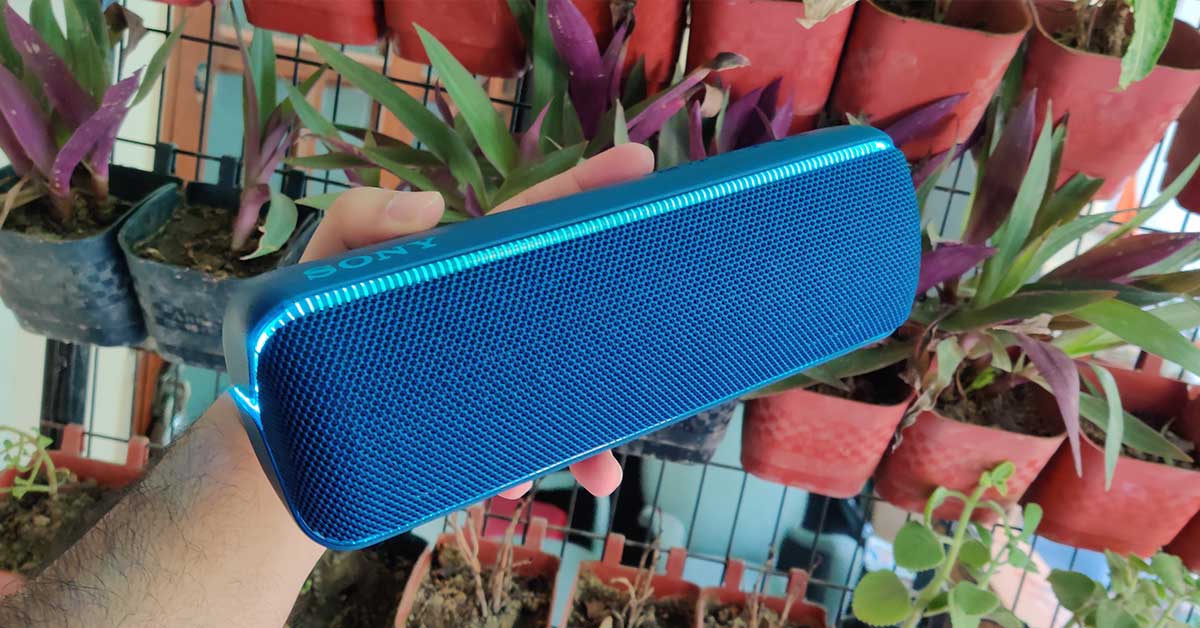 There are two more LED lights hidden behind the grille, which came to us as a good surprise. They are well hidden and only light up when you play a track. They flash with the beats, so does the LED light strips. You can control the light strip and can completely turn it off by pressing the light button, located at the back, for 3 seconds. Talking about which, there is back as well as front button panel on the Sony SRS-XB32 Bluetooth speaker. Let’s talk about the front one first. This is located on the top of the speaker and consists of the live mode, play/pause, volume up, volume down and power buttons. 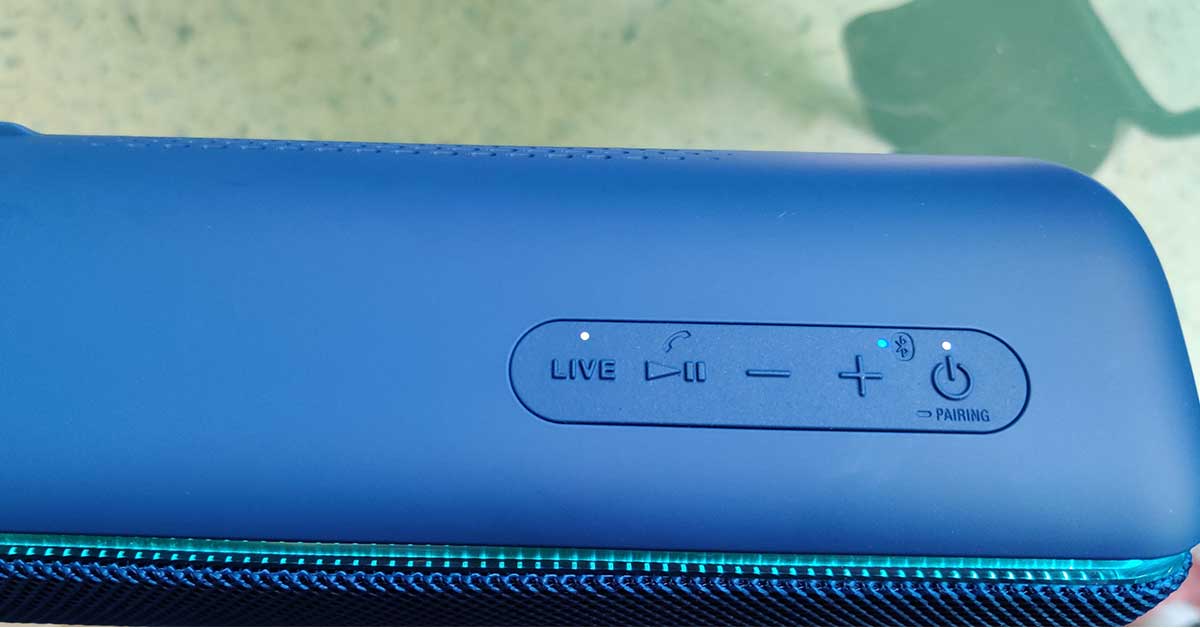 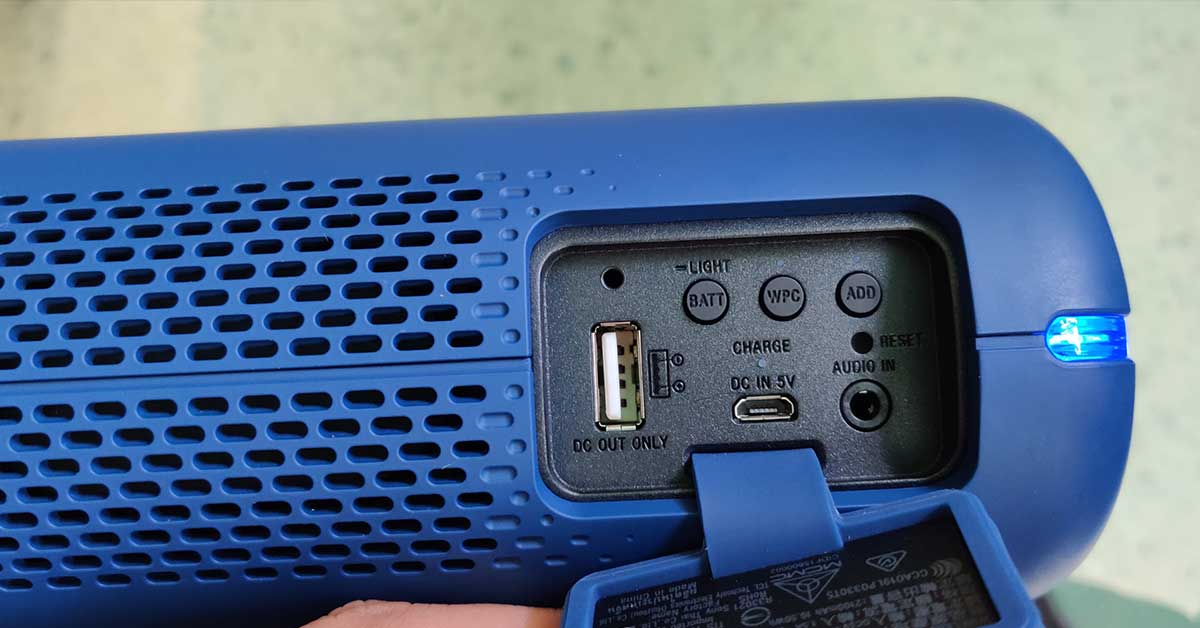 The rear panel has the regular USB, MicroUSB charging ports as well as an auxiliary-in jack. This is accompanied by a couple of buttons such as battery (that doubles up as the light key), which lets you know the exact amount of battery left in the device (when short pressed). A reset pinhole button can also be found here. A bit of advice, keep this panel tightly shut since the Sony SRS-XB32 Bluetooth speaker is IP67 rated. Which means it is water and dustproof. If you let the rear panel loose then water might seep in if submerged in water.

With this the BT speaker is also shockproof, we dropped it from up to 3 feet and nothing happened to it. Not even a scratch. This is mostly because the entire shell is built of hard rubberised material. We have seen water resistant machinery coming from Sony before, but shockproof is something new.

Coming to the Sony SRS-XB32 Bluetooth speaker’s capabilities, its audio and features, we found it to be quite attractive. Setting up this speaker was child’s play and with NFC enabled on the device it just takes a tap to connect the speaker to any NFC compatible smartphone or tablet. In case you do not have that on your device, you can just pair it as easily using Bluetooth. In about 2 minutes we were up and running. Sony’s Music Center app comes handy when you want to operate the device wirelessly. The app also shows a popular list of music apps in one place, which of course are already installed on your smartphone. These include Spotify and Google Play Music.

The Blue LED light on the top panel stops flashing once your smartphone is connected to the speaker. And as soon as it did, we turned on Spotify to listen to some of our favourite tunes. Since the Sony SRS-XB32 Bluetooth speaker falls in the extra bass category, they do deliver a great bassy experience. The highs and lows are great. Mid becomes better when you turn on the live mode. One can easily toggle between modes using the top button panel. 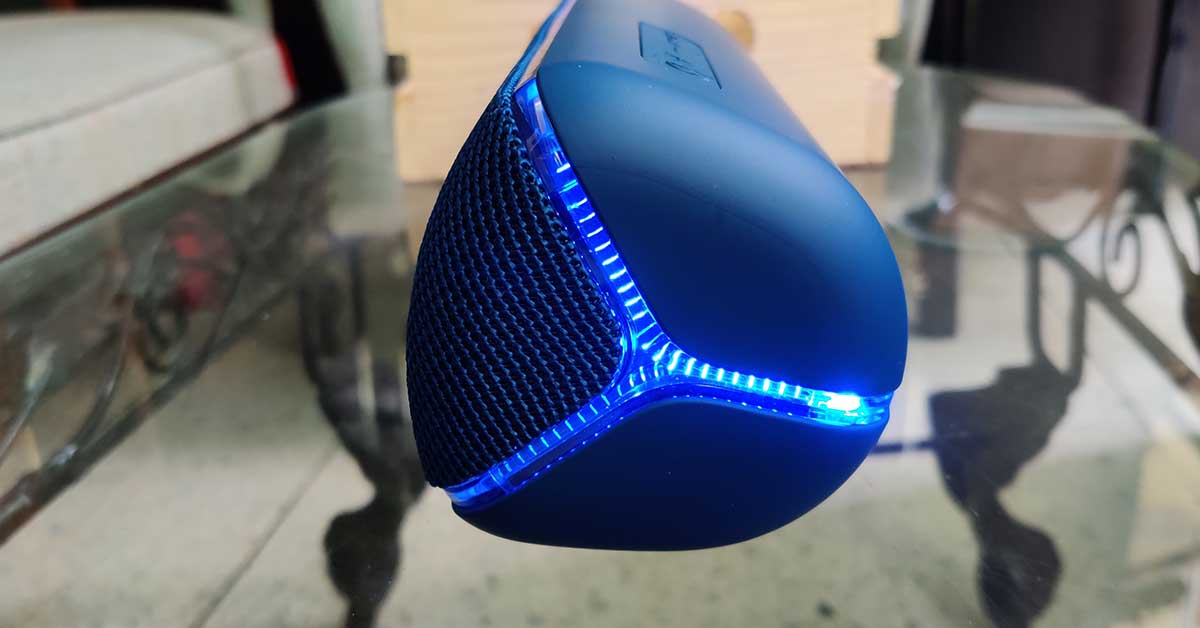 In standard mode the LED indicator on top of the power button will be green (can access this by pressing play and volume down buttons together). To get into extra bass mode tap the live button, which will turn the power indicator to white. For live mode with extra bass, the LED lights on both the live and power buttons will turn white. Yes, this can be tricky to learn at first, but after a few times, you get the hang of it. In case you still do not get the gist of it, all this can be managed from the Music Centre app as well.

The live mode adds a real punch to the sound by enhancing the mids. Which also makes the voice clearer. It is great if you are hearing jazz tunes or opera on it. For regular Bollywood masala or western tunes, the extra bass mode is where we found comfort. Some neat functionalities have been added to the Sony SRS-XB32 Bluetooth speaker like party booster mode. When turned on via the app, this will enable you to tap the speaker on top, bottom, front, left or right. Each tap will produce different sounds of a drum or percussion. Gimmicky? Yes, but fun? Definitely yes!

Also, one can create a party chain of these speakers. If you have more than one of these then you can connect them with each other to create a party chain (up to 100 speakers at a time). Therefore, getting more great sound. Sony claims that the battery of this speaker lasts for 24 hours. Well, it does almost do that if you keep the extra bass mode off and do not turn on the LED lights. Then you get much more battery life, otherwise, you will end up getting half of it (12-13 hours), which still is not bad. Also, with the USB port, you can charge your other devices using Sony SRS-XB32 Bluetooth speaker. Coming to think of it, one would not be doing that often, but in case you are out with this portable speaker and need a quick battery top-up in your smartphone, you know you can rely on this BT speaker.

The price of the Sony SRS-XB32 Bluetooth speaker is Rs 10,990 in India. Is that steep? Yes. But is it worth it? Totally. The sound is superb, the looks are great, LED lights can be controlled, the battery lasts long, what’s there not to like. But yes, if you ask us to compare it with the competition, we have to say a sub-10K price on this speaker would have been a sound-licious buy.

JBL introduced a new lineup of Bar Series Soundbars in India: Details Inside