Both the speakers are dustproof, waterproof and shockproof. 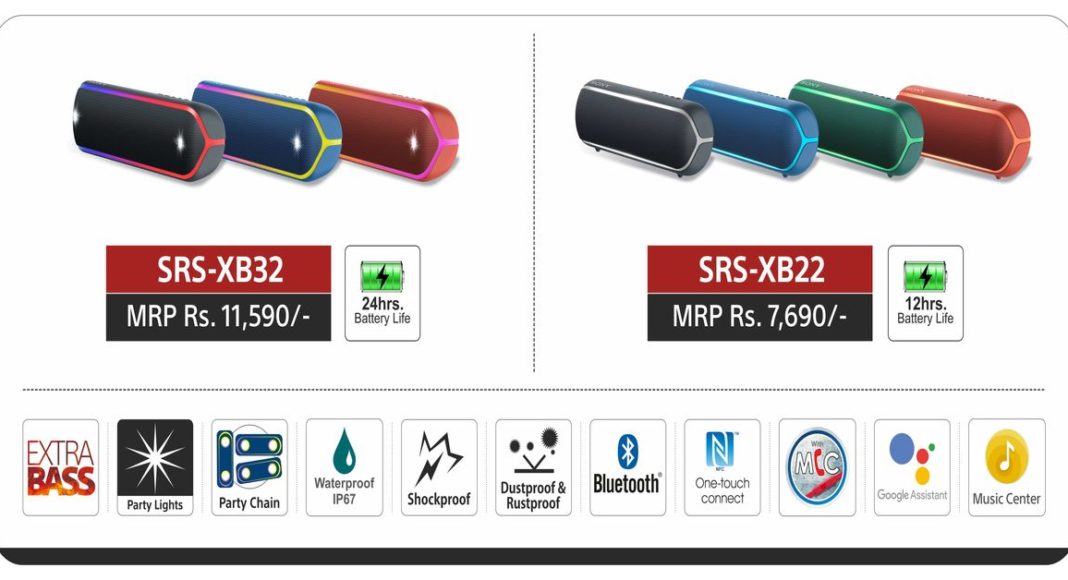 Both the newly launched speakers will go on sale from June 15, 2019 onwards and they can be purchased from Sony’s online store or other major e-commerce retail stores.

The Sony SRS-XB32 comes with Bluetooth version 4.2 and has NFC support. It supports SBC, AAC and LDAC music and audio codecs and as the name suggests, it comes with Extra Bass Boost function. There is also a Live Sound function in the new Sony SRS-XB32 Bluetooth speaker. Since it is a party speaker, it can be connected with other speakers wirelessly and form a chain of up to 100 wireless party speaker chain. The new Sony Bluetooth speaker comes with S-Master Amplifier type and it has a frequency range of 2.4GHz/ 20Hz to 20,000Hz/ 20KHz. The SRS-XB32 Bluetooth speaker comes with multi-colour line light along with Strobe flash and it has a dimension of 238 x 84 x 83mm, it weighs approximately 900 g.

On the other hand, the Sony SRS-XB22 Bluetooth speaker comes with all the features of the XRS-XB22 but it has line light instead of the multi-colour line light and Strobe flash the SRS-XB32 has. The SRS-XB22 also can form a speaker chain of up to 100 speakers and comes with Extra Bass Boost function as well. Similar to the other speaker, it also comes with voice assistant support. The new Sony SRS-XB22 has a dimension of 201 x 72 x 68mm and it weighs 540g.

Aman Singhhttps://www.gadgetbridge.com/
Aman Kumar Singh has a Masters in Journalism and Mass Communication. He is a journalist, a photographer, a writer, a gamer, a movie addict and has a love for reading (everything). It’s his love of reading that has brought him knowledge in various fields including technology and gadgets. Talking about which, he loves to tweak and play with gadgets, new and old. And when he finds time, if he finds time, he can be seen playing video games or taking a new gadget for a test run.
Facebook
Twitter
WhatsApp
Linkedin
ReddIt
Email
Previous article
Toreto Trilogy power bank with 12,000mAh battery and built-in charging cable launched in India: Price and details
Next article
Vivo X15 renders leaked online: Take a look