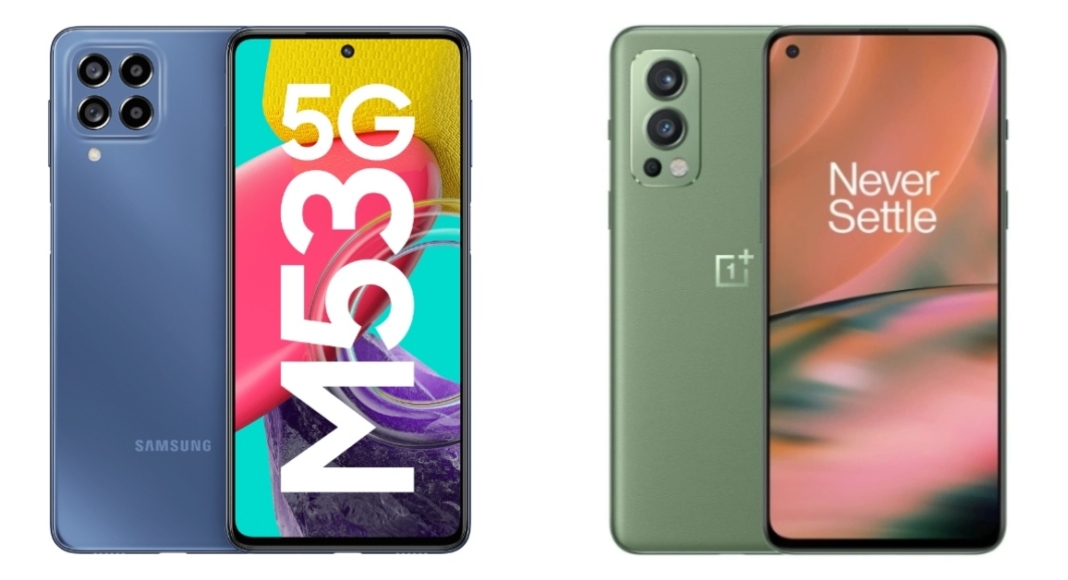 In India, a slew of mid-range smartphones have recently been launched. Samsung’s M Series lineup was also refreshed with the launch of the Samsung Galaxy M53 5G in India. The device, which has a quad rear camera setup, is powered by the MediaTek Dimensity 900 SoC. In addition, the handset has an AMOLED display with a refresh rate of 120Hz. The device directly competes with the OnePlus Nord 2 5G, which was released last year, with these high-end specs. The following is a detailed comparison of the Samsung Galaxy M53 5G Vs OnePlus Nord 2 5G to help you understand the differences and decide which to buy.

OnePlus Nord 2:  Triple rear camera set-up that includes a 50-megapixel IMX766 primary sensor with OIS. Under the hood, there is an 8-megapixel secondary sensor and a 2-megapixel tertiary sensor

The MediaTek Dimensity 900 SoC is used in the Samsung Galaxy M53 5G, making it faster than the MediaTek Dimensity 1200-AI SoC used in the Nord 2. The Galaxy M53 has an advantage over the Nord 2 because it has a 108MP quad-camera setup with a depth sensor for portrait capture, which the opponent appears to lack. The Android 12 operating system is also installed on the device. So In terms of software, we prefer Samsung’s OneUI, which is a clutter-free Android skin that is more user-friendly and the best available. The M53’s battery is 5,000mAh and supports 25W fast charging, whereas the Nord 2’s battery is 4500mAh and supports 65W fast charging.

For the money, the M53 comes with high-end features like a bezel-less Super AMOLED edge-to-edge display with 120Hz refresh rate support, elevating it to the status of a premium device. The Nord, on the other hand, has a 90Hz refresh rate and a smaller AMOLED screen.

The Samsung Galaxy M53 5G is an undoubtedly feature-packed device that comes at a significantly lower price. As a result, we recommend that you purchase Samsung’s most recent phone.

Komila Singhhttp://www.gadgetbridge.com
Komila is one of the most spirited tech writers at Gadget Bridge. Always up for a new challenge, she is an expert at dissecting technology and getting to its core. She loves to tinker with new mobile phones, tablets and headphones.
Facebook
Twitter
WhatsApp
Linkedin
ReddIt
Email
Previous article
Xiaomi Smart TV 5A to launch in India on April 27
Next article
After rolling out Two Thumbs Up, Netflix released Category Hub to explore favourite categories on the platform