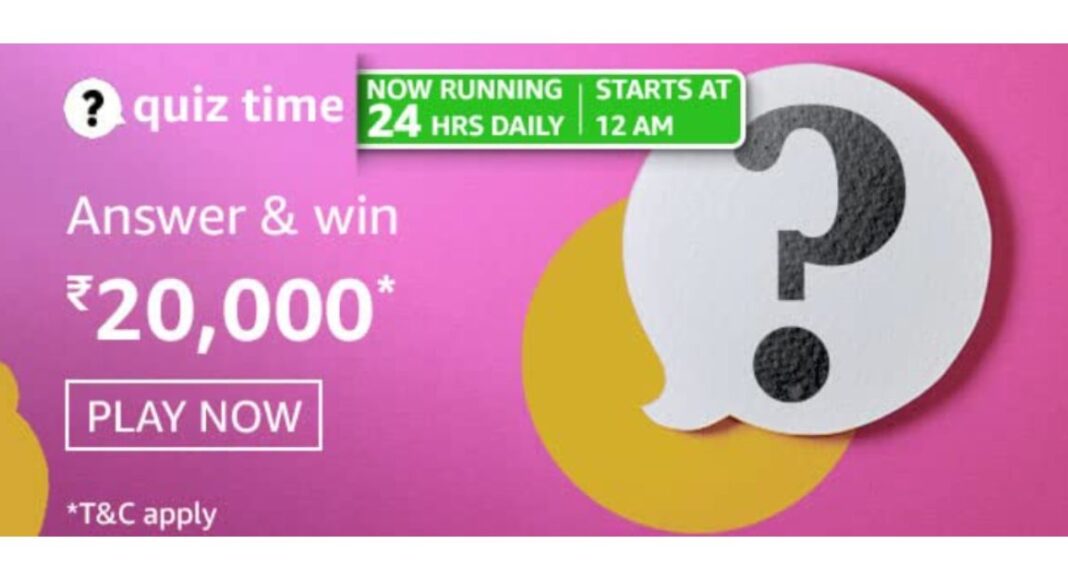 22 July 2021 Amazon Quiz has gone live. The interested people can participate in the quiz every day to win exciting prizes being offered by the company. The company puts up 5 general questions to which you have to answer correctly. You can submit your answers by choosing from the options given. Today you have a chance to win Rs 20,000 Amazon Pay Balance

Every day the e-commerce platform brings a new set of questionnaires which consists of five easy questions based on current affairs and general knowledge. The Amazon Quiz can be played from 12 AM to 11:59. You have to answer all the questions correctly to enter into a lucky draw. The results of today’s quiz will be announced at the end of the month. Only one person will be declared a winner. If you don’t know the answers do follow Gadget Bridge because here we update all the answers to the Amazon Quiz on our website. So, here are the answers to the 22 July 2021 Amazon Quiz and win Rs 20,000 Amazon Pay Balance.

Question 1: Six years after abandoning the “one-child policy” of 1979, which country has now introduced a “three child policy”?
- Advertisement -

The answer is- China

Question 2: 107-year-old Billimora-Waghai heritage train route, that recently was ordered to be closed, lies in which state of India?

The answer is- Gujarat

Question 3: Barbora Krejcikova, who won her first grand slam singles title in June 2021, is from which country?

The answer is- Czech Republic

Question 4: This device allows which type of energy change?

The answer is- Wind to Electrical

Question 5: Which actor-director who plays the role of Happy Hogan directed the first Marvel Cinematic Universe movie featuring this character?

The answer is- Jon Favreau

Komila Singhhttp://www.gadgetbridge.com
Komila is one of the most spirited tech writers at Gadget Bridge. Always up for a new challenge, she is an expert at dissecting technology and getting to its core. She loves to tinker with new mobile phones, tablets and headphones.
Facebook
Twitter
WhatsApp
Linkedin
ReddIt
Email
Previous articleViewSonic LS600WE projector review: For the love of viewing
Next article22 July 2021 Flipkart Daily Trivia Quiz Answers: Answer to win exciting prizes