All the monitors are TÜV Rheinland Eyesafe-certified

The Taiwan-based electronics major, Acer, has announced the launch of its new Predator and Nitro gaming monitors globally. The company has introduced three gaming monitors that include Predator XB273U NX, Predator XB323QK NV and Acer Nitro XV282K KV all the features required for gaming to other professional needs. The latter two monitors are TÜV Rheinland Eyesafe certified while the earlier one comes with a WQHD panel.

Victor Chien, President, Digital Display Business, Acer Inc. said, “Our newest gaming monitors feature the industry’s latest technology to give gamers smooth performance and comfortable ergonomics. Designed to appeal to the most power-hungry gamers, our Predator gaming monitors have proven their quality and reliability as a top choice of pro-gamers as well as those who just want to have fun. The new Predator and Acer Nitro monitors are available in a variety of designs and sizes to support just about anyone in the market for a gaming monitor.”

Starting with the new Acer Predator XB273U NX gaming monitor, it features a 27-inch wide quad high definition (WQHD) panel with a resolution of 2,560 x 1,440 and a rapid 275 Hz refresh rate (overclocked). Moreover, it offers a and up to a 0.5 ms response time that helps in delivering smooth and tear-free visuals even when fast-moving objects race across the screen. In addition to this, it has an NVIDIA Reflex Latency Analyzer for pro gamers too which is a system latency measurement tool that detects clicks coming from the mouse and then measures the time it takes for the resulting pixels to change on the screen.

The display is HDR supported and it offers 95% of the DCI-P3 spectrum for vibrant colours and deeper blacks. Also, the screen is further enhanced with the company’s own Agile-Splendor IPS technology for clear images.

The Predator XB323QK NV gaming monitor by Acer is a 31.5-inch NVIDIA G-SYNC Compatible UHD screen. It offers 3840 x 2160 pixels of resolution and a 144 Hz refresh rate for smooth visuals with the vibrant range of colors offered by the monitor’s DCI-P3 90% Wide Color Gamut. This Acer monitor also includes Agile Splendor IPS and a VESA DisplayHDR 400 certification too.

According to the company both the Predator gaming monitors also come with Acer VisionCare 4.0 that keeps the user’s eyes safe during longer gaming sessions and tournaments. Additionally, both the monitors are among the first monitors in the world to be TÜV Rheinland Eyesafe certified. Whereas Acer’s ErgoStand allows the users to adjust their monitor’s swivel, pivot, tilt and height.

This monitor is compatible with the latest gaming console and has a 4K UHD IPS display with 3840 x 2160 pixels of resolution. It features a 100,000,000:1 contrast ratio and covers 90% of the DCI-P3 wide color gamut. The panel is also supported by AMD FreeSync Premium technology along with a higher refresh rate of 144Hz and a 1 ms response time for speedy frame rendering. Moreover, there is Acer HDR 400 and liquid crystal IPS for increased image quality while VisionCare 3.0 reduces eye strain. 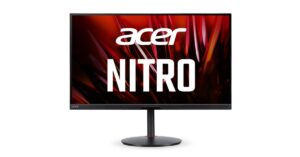 Komila Singhhttp://www.gadgetbridge.com
Komila is one of the most spirited tech writers at Gadget Bridge. Always up for a new challenge, she is an expert at dissecting technology and getting to its core. She loves to tinker with new mobile phones, tablets and headphones.
Facebook
Twitter
WhatsApp
Linkedin
ReddIt
Email
Previous article
Samsung Galaxy M02s with triple rear cameras and a 5,000mAh battery launched in India
Next article
Lenovo launched its new line up of Yoga and IdeaPad Slim laptops in India