How useful is a high refresh rate monitor in fortnite? 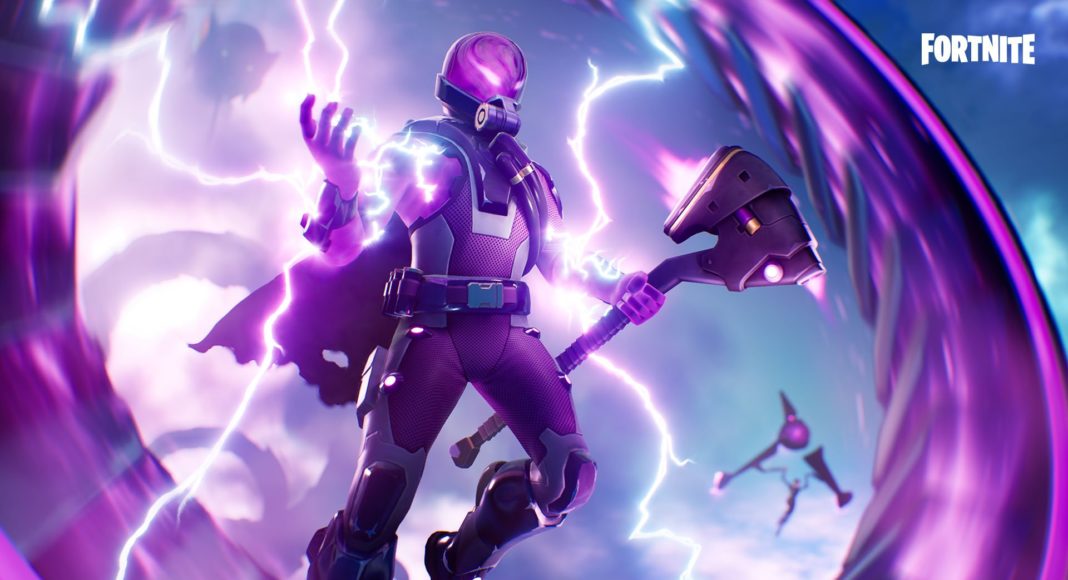 Fortnite is one of the most popular games in the world, ever since its official release way back on the 25th of July in 2017, the game has broken record after record in terms of player population and the game design changes, the developers have managed to keep it fresh with each season being a brand new thing of its own, with its own personality and gameplay changes.

That being said, the game has an incredibly high skill ceiling, with almost the entirety of the environments in the game being completely destructible bringing a very fresh nuance to the battle royale genre, and it is not just about destroying stuff in that game, no sir, you collect materials after harvesting your harvesting tool and you can create walls, ceilings, floors and ramps to make each gunfight way more difficult for your opponents (or yourself if you’re not really thinking through about what you’re doing). Fortnite has easily got to be one of the most popular games in the world but with almost 60% of it player base being extremely good at it, not to mention a lot of its player base is people under the age of 18 and those guys really don’t know how to relax and enjoy games as compared to trying very hard to win in each match!

So to compete with their super-fast reflexes and skills, people grab the best kind of hardware for their Fortnite competitive gameplay, with graphics cards and processors that will make the game run at its highest fidelity in terms of performances, bringing them 240 frames per second as they mow through the competition.

The refresh rate of a monitor also depends on the Dot Per Inch of the screen and in this case, a higher DPI will slow the refresh rate. You may use the DPI calculator to find the DPI of your monitor and know its refresh rate.

Though all that hardware is of no use if your monitor cannot process a higher refresh rate and show those frames to you on screen, as most common monitors are locked at a 60FPS deficit and cannot really give you the value of the money you spend on your hardware. So are high refresh rate monitors really important in Fortnite? Does a jump from 60 hertz to a higher refresh rate such as 144 hertz or 240 hertz or even a whopping 360 hertz make a huge difference? Let’s talk about this more in-depth!

For this comparison, the comparers grabbed an extremely high refresh rate monitor by ASUS, The ROG Swift PG259QNR 1080P monitor is one of the best of its kind of high refresh rate gaming monitors, and this silky smooth bad boy runs every single game 6 times faster than its usual 60-hertz counterparts. For a high-end comparison they grabbed Nvidia’s new Geforce RTX 3080 Founders Edition card to run the game at its most maximum graphical fidelity, and then also grabbed an Nvidia Geforce GTX 1660 for a more mainstream budget based comparison as not everyone can afford the expensive and high-end RTX 3080 graphics card. The refresh rate difference on the monitors even by their selves may seem like a huge difference, but is there really a huge difference between the smoothness these monitors bring? Let’s compare!

The chart below showcases the latency of everything on screen when compared to the inputs that the player gives and the things that are overall happening on the screen, this comparison is happening between milliseconds so it is extremely hard to spot unless you have the right tools, fortunately for the comparers they had Nvidia’s Reflex Latency Analyzer tool handy and could spot the differences and create this chart, and the differences are there, as clear as night and day! 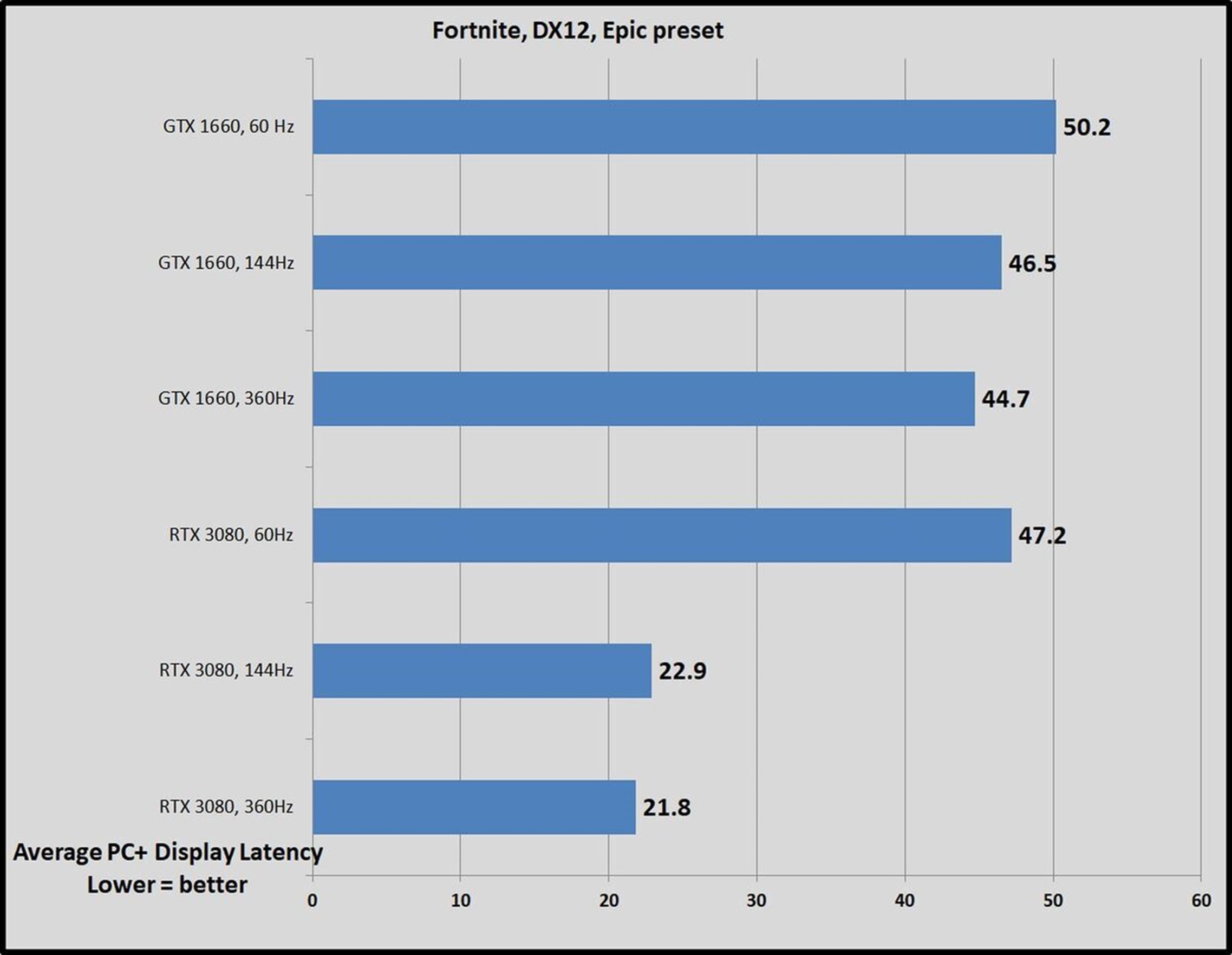 The epic preset is the highest graphical fidelity that the game can run on, and the lower the number is the better it is. The 1660 is shown to be struggling, it is probably because the card is having a lot of trouble handling Fortnite on its highest graphical preset, that being said, the difference can clearly be seen with the 144 hertz and the 360-hertz monitor having actually less than half of the display latency time as the 60 hertz when compared on the 3080 graphics card! 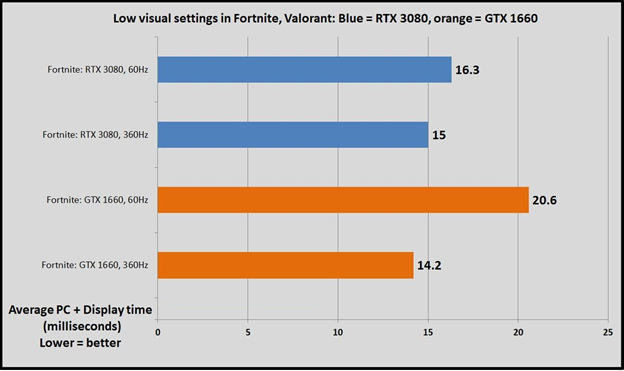 So this just clears our doubts about a higher refresh rate being better in responsiveness to the lower refresh rates of 60 hertz, though jumping directly to a 360 hertz might be a bit too much as even a modest 144 hertz can be a giant difference maker in your responsiveness, though if you have the extra buck and are willing to spare then, by all means, go for it!

Fortnite’s a game that heavily depends on quick reflexes, not just in-game, but even grabbing free giveaways that Epic is known for and many of the new players haven’t even gotten less than half of them! Not to mention the game is known for having some of the best battle passes and almost a thousand in-game skins, a lot of players are willing to spend a lot of money on these skins too! But they don’t really seem to know how to acquire them as most of them are limited time only, for example, the Marvel-themed skins that came in Season 4 of Chapter 2, they won’t be coming back any time soon, and they were extra cool especially because of the built-in emotes and everyone’s love for the avengers, people end up buying accounts for money and they get scammed quite often, so I would suggest you buy accounts from a place that is way more guaranteed to give you your money’s worth! Eldorado.GG is one of such places that you can grab a Fortnite account from. Visiting them guarantees you a website that will get you a Fortnite account with some of the best content in terms of skins and emotes that the game has put out, not to mention the sellers on this platform are extremely reliable and can be trusted, the sellers are asked for personal details to prevent them from being able to scam, and the website has 5-day insurance after you receive the account as a back-up, so even if you change your mind after making a purchase, you could most probably get your money back and return the account to the sellers. Eldorado.GG is furthermore known for having accounts that cost less than 10 dollars with 20+ skins from the get-go, to have accounts that cost up to 60-70 dollars with 100-200+ skins in the game! So if you’re looking to start fresh on your Fortnite experience without having to spend a ton of money on Vbucks to customize your character, you should definitely be checking Eldorado.GG out!