Both the devices will be available for purchase via Amazon 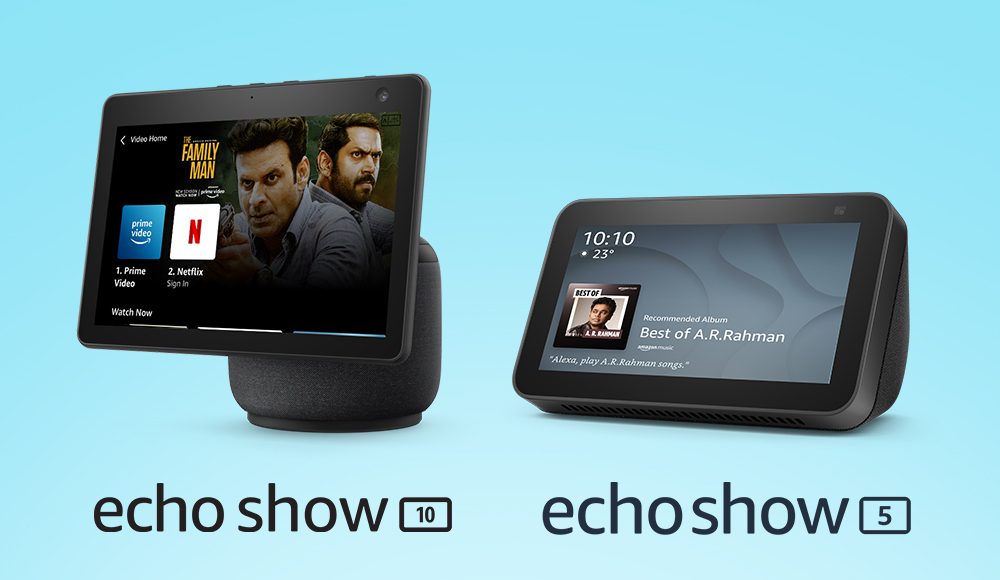 Amazon has expanded its lineup of Echo Show devices with the announcement of the third generation of Echo Show 10 in India. The new smart display officially made its debut along with other Echo devices in September last year. The Amazon Echo Show 10 (3rd generation) comes with an all-new design while holding on to its 10-inch display. The biggest USP of the device is that it comes with a 360-degrees rotating body which automatically rotates when you interact with Alexa. Alongside this, the company has also launched Echo Show 5 which was launched in the US last month.

Amazon Echo Show 10 (3rd generation) has made its debut in India with a price tag of Rs 24,999. It should be noted that the device was launched in the US at $250 that translates to Rs 18,600 which is cheaper than the price quoted for the Indian market. This smart device will be available in India in a single black colour variant via the e-commerce website only. Whereas in the US it comes in two colour variants Charcoal and Glacier White.

Besides this, the company has also introduced another smart display- Echo Show 5 (2nd Generation) at Rs 8,999. However, the smaller and affordable Echo Show will be available at a discounted price of Rs 6,999. It comes in three colour variants: Black, White, and Blue.

Amazon Echo Show 10 features a 10-inch adaptive HD display. It equips a 360-degrees rotating body that automatically rotates when you interact with Alexa. Also, the display will rotate with you during a video call and watching videos that makes sure that it is always in view. There is a 13-megapixel wide-angle camera that moves left to right and right to left keep you at the centre of the frame.

The Amazon Echo Show 10 also incorporates Alexa Group Calling features that lets you connect with up to 8 people for video calling. Besides this, it also supports Zoom and Amazon Chime video conferencing as well.

There are dual front-firing tweeters and a powerful woofer onboard. With Netflix support Echo Show 10 will be able to stream content. The smart display also uses advanced computer vision algorithms to help make your home smarter and more secure. When Alexa Guard is in Away Mode, Echo Show 10 can periodically pan the room and will send you a Smart Alert if it detects someone in its field of view.

The Echo Show 5 is a smaller and more affordable smart display by Amazon. It features a 5.5-inch touch display and comes with an upgraded 2-megapixel HD camera. The camera can also be accessed through the Alexa app to check in on home when you are out of town or away from your home. It can also control smart home devices and also play news and provide weather updates and more. It is also capable of recognising sounds of a crying baby, dog barking, person coughing or snoring—and automate a series of actions.

Komila Singhhttp://www.gadgetbridge.com
Komila is one of the most spirited tech writers at Gadget Bridge. Always up for a new challenge, she is an expert at dissecting technology and getting to its core. She loves to tinker with new mobile phones, tablets and headphones.
Facebook
Twitter
WhatsApp
Linkedin
ReddIt
Email
Previous articleDell UltraSharp Webcam with AI-backed Auto-Framing feature launched in India
Next articleHow can you fix errors on Covid 19 vaccine certificates online?