Announcing the launch Tom Taylor, Senior Vice President, Amazon Alexa said, “These are the best Echo devices we have ever made. Echo and Echo Dot look beautiful and sound even better, and Echo Show 10 completely reimagines Alexa with a screen—the display moves with you, staying in view as you move around. It’s as natural as having a conversation. Plus, Alexa continues to get smarter—just ask to watch Netflix, make group calls, join video meetings on Zoom, upgrade your smart home with Alexa Guard and Amazon Sidewalk, and much more.”

The first in the list is the new Echo that now comes with a new spherical design rather it dropped the tower-shaped design that comes in the previous Echo and Echo Plus models. According to the company, the latest device is a combination of both the Echo and Echo Plus at an affordable price. It now sports a fabric finish with an LED light ring at the base of the sphere that reflects off of surfaces for added visibility. 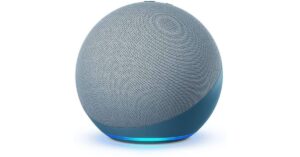 It now offers better sound quality as it uses a 3.0-inch woofer, dual-firing tweeters, and Dolby sound support. In addition to this, the new Amazon Echo automatically senses the acoustics of your space and fine-tunes audio playback. Moreover, this has a built-in smart home hub, with support for Zigbee, Bluetooth Low Energy (BLE), and Amazon Sidewalk. So, Amazon Sidewalk will let you quickly set up the device support devices like Ring Smart Lighting and Tile to locate misplaced items.

Amazon’s Echo Dot it’s the most popular amongst all its devices for its portability and easy on the pocket. The new Echo Dot also features the same spherical design and fabric finish too as mentioned above. It comes integrated with a 1.6-inch, front-firing speaker. Whereas the new Echo Dot with the clock now offers some upgraded features such as LED display, temperature, timers, and alarms. Also, it now has a tap-to-snooze feature.

The Kids version of the Echo Dot is similar to the standard variant and has been specifically designed for kids. The Echo Dot Kids Edition will be offered in two colour prints — Panda and Tiger with spherical design. Alexa’s custom-built kid’s experience means kids can ask Alexa questions, set animal sound alarms, get help with homework, and call approved friends and family, with extensive controls that give parents peace of mind. In addition to this, the parent will also be able to create Alexa voice profiles for their kids, so Alexa automatically shifts to a kid’s profile when she recognizes a kid’s voice extending the kid’s experience, and parental controls, to any Echo device in the house. The device will be available with a 1-year Amazon Kids+ subscription that offers kid-friendly Audible books, interactive games, and educational skills.

This is the last and most important device on the list. The new Echo Show 10 features a 10-inch, adaptive HD display that now comes with a 360-degrees rotating body which automatically rotates when you interact with Alexa. The display with motion will move with you, video calls, recipes, and shows are always in view. There is a 13-megapixel, wide-angle camera onboard which pans and zooms to keep you at the centre of the frame. In addition to this, the new device now comes with new Alexa Group Calling features that let the user create a group of up to eight friends and family members. Later on, it will be extended with support for Zoom and Amazon Chime video conferencing. 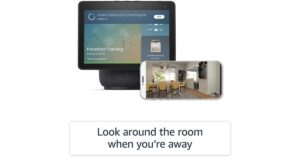 To deliver premium, directional sound the device has dual front-firing tweeters and a powerful woofer. Soon the users will be able to watch Netflix simply by asking Alexa, with the ability to search, browse, and stream the entire catalogue, including Netflix Originals such as Stranger Things, The Crown, and The Irishman, using just your voice. Echo Show 10 uses advanced computer vision algorithms to help make your home smarter and more secure. When Alexa Guard is in Away Mode, Echo Show 10 can periodically pan the room and will send you a Smart Alert if it detects someone in its field of view. You can also securely access a live feed from another Echo Show device or the Alexa app, with the ability to remotely zoom or pan the display and camera to see the entire room; or set up a Routine that automatically turns on the lights when someone enters the room.

Komila Singhhttp://www.gadgetbridge.com
Komila is one of the most spirited tech writers at Gadget Bridge. Always up for a new challenge, she is an expert at dissecting technology and getting to its core. She loves to tinker with new mobile phones, tablets and headphones.
Facebook
Twitter
WhatsApp
Linkedin
ReddIt
Email
Previous article
Amazon launches Luna cloud gaming service
Next article
Amazon introduced all-new Fire TV Stick and Fire TV Stick Lite