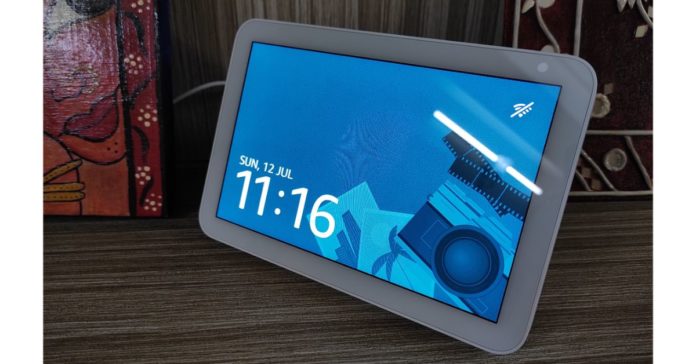 Amazon Echo Show devices have been getting a lot of success in India giving a tough fight to Apple’s Home Pod and Google nest Hub that are comparatively small as well as pricier. Amazon’s latest Echo Show 8 is a complete entertainment device that is not expensive and offers an 8-inch screen. It is placed between the Amazon Echo 5, which is too small and the Echo Studio that is a bit too expensive. However, it comes with a large 10-inch screen. So, we would say it is a well-priced device designed keeping in mind all your requirements. So, let’s get on to a detailed review of Amazon Echo Show 8 to know whether it offers features as per your requirement and how well it performed to justify the cost.

In terms of the design, the Amazon Echo Show 8 comes with an impressive design. It just perfectly sits on your workstation or your kitchen countertop (in short anywhere). For a price tag of Rs 9,999, it is a really good deal. In the past, the company has introduced Amazon Echo, Echo Dot with Clock, Echo Studio, Echo Show 5 and now Show 8. The range of smart displays is nothing but just an added screen to a speaker equipped with the voice assistant Alexa, along with video calling and streaming options. Some might say it is just a bigger version of Show 5 and a smaller version of Studio. However, it has a relatively sharper display with 1,280×800-pixels of resolution and a solid two-inch speaker. It comes with the same resolution as the 10-inch Show, which was launched last year. It is available in two colour options white as well as black. Here, the display is crisp while the rear is less chunky. 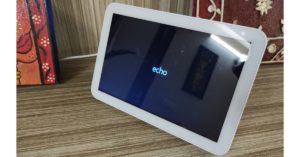 Unlike Echo Show 5 it comes with a physical camera shutter keeping in mind the user’s privacy, which can be kept closed when one is not video calling.

Here is one thing that is not-so-cool about the device. You only get a low 1-megapixel camera sensor instead of a 5-megapixel camera that comes on the second generation of the Echo Show. Nonetheless, the lower-quality camera was not much pixelated. In terms of sound quality, it comes with better resonance as there is a pair of 2-inch speakers. However, it lacks Dolby-enhanced audio and Zigbee smart hub, which comes in the larger second-generation Echo Show. But that hardly matters as it makes a perfect companion in the kitchen or in any of your rooms. So, in the sound department Echo Show 8 stands out and listening to music is the only thing that you would like to do on it. 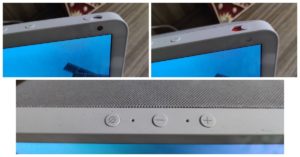 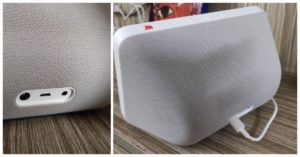 Echo show 8 is powered by a Mediatek chipset, which is basically different from what comes on the original Echo Show having Intel Atom-based chipset.

On the software front, it runs Fire OS letting the Echo device check for the latest updates such as news, weather and other automatically. But then it does not display up to date visual presentation of the news (at times). It can be commanded to play desired music and now it also supports Spotify. Over that, Amazon music gets you lyrics with a beholding background. But we were quite taken aback to know that there is still no YouTube app on Alexa devices. 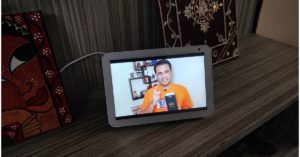 Yes, you can watch it on Firefox or Amazon Silk browsers but still, a dedicated app would have been better. The fonts, as well as icons, are large to be seen easily without straining your eyes much. While Alexa was good at paying attention to our voice commands, we loved using it as a digital photo frame, which changes the images from time to time. Goog Photos app is still not there, but one can use photos stored in Amazon Photos or on Facebook to display.

The Amazon Echo Show 8 can be used to get the latest news updates, weather, sports scores, set alarms and reminders as well as check out the latest recipes as you cook. The device sounds good but lacks Dolby audio. Can play content from Amazon Prime Video and Voot but most people will miss other video streaming services such as Netflix, or Disney+ Hotstar. You can use it to control other smart devices such as alarms, other home gadgets and Echo devices. For us, it is worth your money and is comfortable to be used anywhere. And yes, the sound is really good on this one. 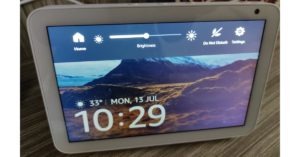 Comes with a camera shutter

- Advertisment -
Amazon Echo Show devices have been getting a lot of success in India giving a tough fight to Apple’s Home Pod and Google nest Hub that are comparatively small as well as pricier. Amazon's latest Echo Show 8 is a complete entertainment device that...Amazon Echo Show 8 review: Good sight and sound