Amazon Fab Phones Fest: Best offers to look out for from Samsung to OnePlus

The sale is live till Christmas Day 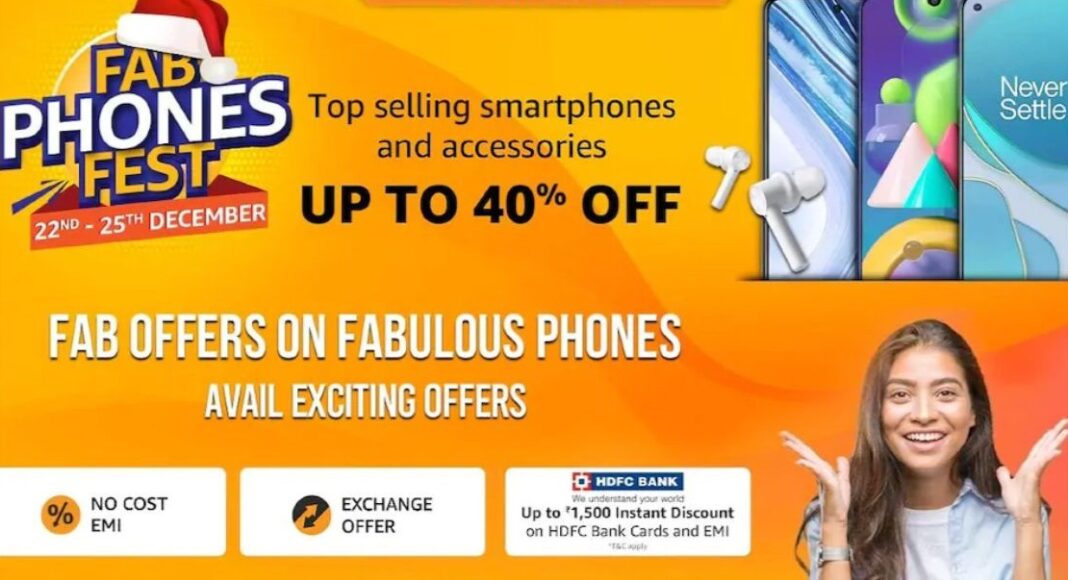 Amazon Fab Phones Fest is now live on its platform and will be live until December 25 in India. During the Sale period, the e-commerce giant will be offering up to 40 percent of smartphones from popular brands such as Apple, Samsung, OnePlus, Xiaomi, and more. Other than discounts Amazon is also offering no-cost EMI options, exchange discounts, and up to Rs. 1,500 off to HDFC Bank cardholders and well as EMI transactions.

The smartphones that are up for grabs during the Amazon Fab Phones Fest sale:

OnePlus 7T Pro is available in a single 8GB RAM/256GB storage variant, during the year-end sale the device can be purchased at Rs 38,999. Amazon is offering 19 percent off on this smartphone. In addition to this, an extra Rs 5,000 off will be on the device using the coupons along with up to 6 months of no-cost EMI offer. The OnePlus 7T Pro was launched in India last year and comes with a 6.65-inch Fluid AMOLED display. It is powered by Qualcomm‘s Snapdragon 855+ chipset paired with 8GB of LPDDR4 RAM and 256GB of UFS 3.0 internal storage.

Samsung Galaxy Z Flip can now be purchased at Rs 83,999 down from Rs 1,20,000. There will be up to 12 months of no-cost EMI option on this device and up to Rs 10,600 off on the exchange of old smartphones. Moreover, there will be 10% off with HDFC Bank Credit Card, Credit EMI and Debit EMI Transactions. It comes with a 6.7-inch full-HD Dynamic AMOLED display whereas there is a 1.1-inch Super AMOLED secondary display. Under the hood, there is a Qualcomm Snapdragon 855+ chipset combined with 8GB of RAM and 256GB of non-expandable storage.

The OnePlus 8 which was launched by the Chinese company this year only is now up for grabs at Rs 39,999 with up to Rs 2,000 instant discounts with HDFC cards and get up to ₹ 10,600.00 off on exchange. The device runs on OxygenOS on top of Android 10 and is powered by a Qualcomm Snapdragon 865 processor coupled with up to 12GB of LPDDR4X RAM and up to 256GB of UFS 3.0 storage. It features a 6.55-inch full-HD+ Fluid AMOLED display and also includes a triple rear camera set up.

The Fan Edition of Samsung Galaxy S20 FE will be available at Rs 40,998 via Amazon Fab Fest Sale. There will be 10% off with HDFC Bank Credit Card, Credit EMI and Debit EMI Transactions. The Samsung Galaxy S20 FE features a 6.5-inch Infinity-O Super AMOLED display. Under the hood, there is an octa-core Exynos 990 paired with 8GB of RAM and 8GB of RAM with 256GB of storage. The smartphone features a triple rear camera set up and is backed up by a 4,500mAh battery.

The Amazon Prime Members can also purchase Samsung Galaxy M51 at a discounted price of Rs 22,999 during the sale. Samsung Galaxy M51 comes with a massive 70000mAh battery. Powered by Qualcomm Snapdragon 730G with a 6.7-inch Super AMOLED Plus Infinity-O display. The smartphone sports a quad-camera setup, with a 64MP main Sony IMX 682 sensor.

This is the company’s latest addition to the Note series. The device is already priced at 1,16,000 but now it can be bought for Rs 1,04,999. There will also be no-cost EMI for up to 9 months. Samsung Galaxy Note 20 Ultra 5G has a 6.9-inch WQHD Infinity-O Dynamic AMOLED display. The smartphone is powered by an octa-core Exynos 990 or Qualcomm Snapdragon 865+ SoC. It has a triple rear camera setup with a 108-megapixel primary sensor.

The popular smartphone by Xiaomi is now up for grabs at Rs 54,999 in addition to no-cost EMI for up to 12 months. Mi 10 5G runs on MIUI 11, based on Android 10 and features a 6.67-inch full-HD+ curved 3D AMOLED hole-punch display. There is an octa-core Qualcomm Snapdragon 865 processor under the hood. The smartphone also sports a quad rear camera setup that includes a 108-megapixel Samsung’s ISOCELL Bright HMX sensor.

Komila Singhhttp://www.gadgetbridge.com
Komila is one of the most spirited tech writers at Gadget Bridge. Always up for a new challenge, she is an expert at dissecting technology and getting to its core. She loves to tinker with new mobile phones, tablets and headphones.
Facebook
Twitter
WhatsApp
Linkedin
ReddIt
Email
Previous articleHero Electronix introduces Qubo Smart Outdoor Security Camera
Next articleAmazfit GTS 2 mini launches in India for Rs 6,999