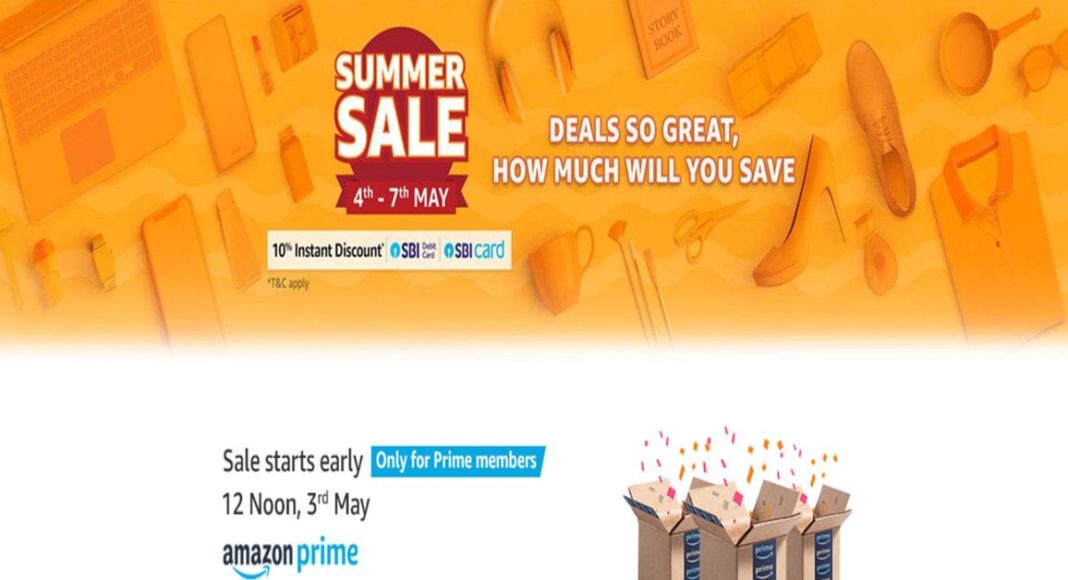 Amazon India is all set to begin its Annual Summer Sale on May 4 and will go on till May 7. As a part of the sale, a number of smartphones and other gadgets will be available at discounted rates. If you have subscribed to Amazon Prime, you will get an early access to the sale starting 12:00pm (noon) on May 3.

As we mentioned earlier, during the upcoming four-day sale, Amazon will offer discounts and offers on some of the best-selling devices. The sale will have smartphones from companies like Samsung, Xiaomi, OnePlus, Apple, Realme and others.

During Amazon’s Summer Sale, the customers will also get an extra 10% discount on making the purchase from SBI Credit or Debit cards. It is also offering up to 40% discount on smartphones and mobile accessories. Although the date and time of the sale is announced but Amazon hasn’t revealed the prices at which the smartphones will sell.

From Xiaomi, the newly launched Redmi Y3 and the Redmi 7 smartphones will be available during Amazon’s sale. Both the devices come with 6.26-inch display, Android 9.0 Pie and are powered by a Qualcomm Snapdragon 632 SoC. They both sport dual rear cameras and house a 4,000mAh battery.

The difference between the two smartphones is that Redmi Y3 focusses more on selfies and features a 32MP front-facing camera. The Redmi Y3 carries a starting price of Rs 9,999, while the Redmi 7 price starts at Rs 7,999. Other than the newly launched devices, Redmi 6A, Redmi 6 Pro will also be on the sale.

Samsung Galaxy M30’s 4GB RAM/ 64GB storage variant is priced at Rs 14,990. And the 2019 flagship model of Samsung – Galaxy S10 – will also be available on sale along with other Samsung smartphones.

A few weeks back, OnePlus 6T received a price cut and even during Amazon’s Summer sale, the device can be bought at a discounted rate. Currently, the 8GB RAM variant of the OnePlus 6T is selling for Rs 37,999 on Amazon so we can expect a good price cut during the sale.

Oppo’s former sub-brand Realme’s smartphones will also be available on discount in Amazon’s Summer sale. The Realme U1 is listed in the sale page and currently it is selling for Rs 9,999 for the 3GB RAM/ 32GB storage variant.

Other smartphones such as the iPhone X, Honor View 20, Honor 8X, Vivo V15 Pro, Oppo R17, Vivo NEX and the newly launched Huawei P30 Pro will also be in the summer sale.

Aman Singhhttps://www.gadgetbridge.com/
Aman Kumar Singh has a Masters in Journalism and Mass Communication. He is a journalist, a photographer, a writer, a gamer, a movie addict and has a love for reading (everything). It’s his love of reading that has brought him knowledge in various fields including technology and gadgets. Talking about which, he loves to tweak and play with gadgets, new and old. And when he finds time, if he finds time, he can be seen playing video games or taking a new gadget for a test run.
Facebook
Twitter
WhatsApp
Linkedin
ReddIt
Email
Previous articleGarmin Vivosmart 4 activity tracker launched: Price and other details
Next articleNokia 4.2, Nokia 3.2 listed on company’s India website, to launch soon