The hack was claimed by Ayyildiz Tim. 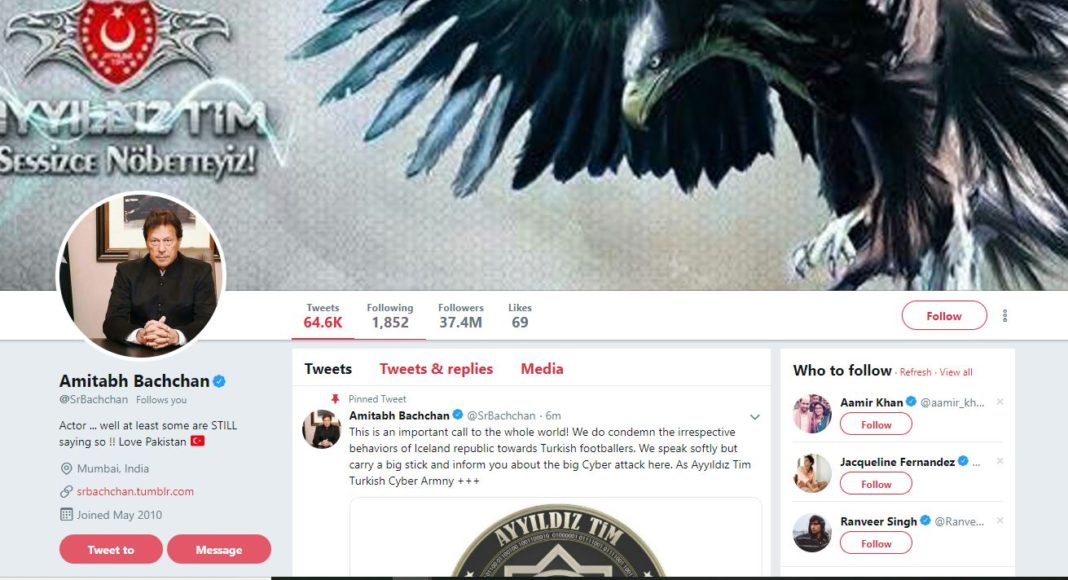 On Monday, June 10, Bollywood superstar Amitabh Bachchan’s official Twitter account was allegedly hacked by Ayyildiz Tim. The hack was claimed by the Turkish hacker group with Tim being a part/ member of it. The hackers also replaced Amitabh Bachchan’s Twitter profile picture with the picture of the Prime Minister of Pakistan Imran Khan.

Other than changing the profile picture, the hackers also changed the bio of Amitabh Bachchan’s Twitter account. The bio was replaced with “Love Pakistan” with a Turkish flag emoji at the end. The cover picture of the Twitter account of Bachchan was changed to the logo of the Turkish hacker group with an eagle. But later, the cover picture was deleted.

After the account of Amitabh Bachchan was hacked, the hacker added a tweet through the account which read, “This is an important call to the whole world! We do condemn the irrespective behaviours of Iceland republic towards Turkish footballers. We speak softly but carry a big stick and inform you about the big Cyber-attack here. As Ayyildiz Tim Turkish Cyber Army.”

A spokesperson of Mumbai Police told PTI that they have informed the cyber unit and the matter was under investigation. The exact time of the attack is not known but it happened around 11:40pm on Monday night.

The Mumbai Police later said, “We have informed our cyber unit and Maharashtra Cyber about *hacked* Twitter account of @SrBachchan. They are investigating the matter. Further updates awaited.”

The account of Bachchan was restored back to normal after half an hour but the actor himself hasn’t said anything regarding this matter. The earlier post, the profile picture along with the cover picture has been deleted and has reverted back to normal.

It is not the first time the Turkish hacker group hacked the Twitter account of a popular actor, in the past they had also hacked the accounts of Anupam Kher, Shahid Kapoor and others.

Earlier this year, India’s political party Bhartiya Janta Party (BJP)’s official website was hacked as well. Although the exact ID of the hacker hasn’t been confirmed and no hacker group has come forward yet. Later, the website was taken down and it stayed down for a few days.

Aman Singhhttps://www.gadgetbridge.com/
Aman Kumar Singh has a Masters in Journalism and Mass Communication. He is a journalist, a photographer, a writer, a gamer, a movie addict and has a love for reading (everything). It’s his love of reading that has brought him knowledge in various fields including technology and gadgets. Talking about which, he loves to tweak and play with gadgets, new and old. And when he finds time, if he finds time, he can be seen playing video games or taking a new gadget for a test run.
Facebook
Twitter
WhatsApp
Linkedin
ReddIt
Email
Previous articleAMD launches Radeon RX 5700-series GPU and 3rd Gen Ryzen 9 CPU at E3 2019: Price and availability
Next articleAsus VivoBook 14 and Asus VivoBook 15 with 9th Gen Intel Core CPUs and NVIDIA GPUs launched in India: Price and specifications