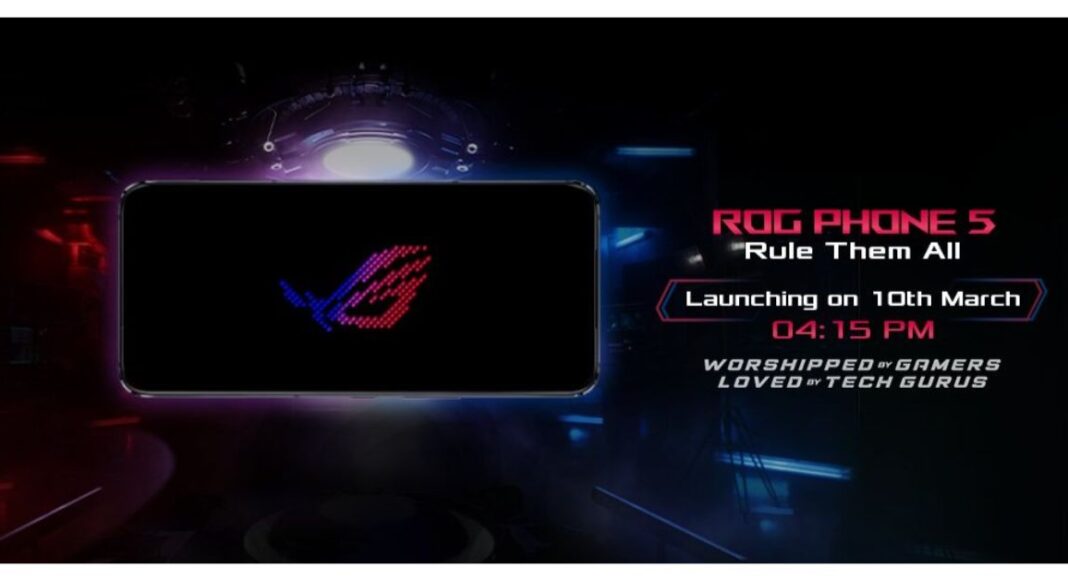 Asus Republic of Gamers is all set to launch its next generation of ROG Phone in India in the upcoming month. The company has officially confirmed to launch Asus ROG Phone 5 on March 10. The global launch of the gaming smartphone would also see new accessories and gaming headsets that would come along with the device. The device will succeed Asus ROG Phone 3 which was introduced last year in July.

The Asus ROG Phone 5 is all set to launch globally on March 10. As per the dedicated page for the event, the launch event will be held virtually in Taipei at 7 pm local time and the launch will begin in India on March 10 at 4:30 pm IST. The launch event is going to be live-streamed across Asus India’s social media handles and will be streamed through the company’s official YouTube channel.

The company in its media invite said, “Join us for the virtual global unveiling of the ASUS ROG Phone 5 series, along with unparalleled gaming accessories for the ultimate gaming experience. Taking forward the legacy of the legendary ROG Phone, the new device is guaranteed to blow your mind with a stunning display, top-notch performance and audio, ultimate speed and control, and cutting-edge technology!”

Ahead of the global launch Asus ROG Phone 5 has appeared on several certification platforms including China’s TENAA. The gaming smartphone has been spotted with model number  ASUS_I005DA along with few images also leaked. The device is shown having a dot matrix panel on the back with the ROG logo glowing up. The phone measures 172.834×77.252×10.29mm, therefore, expected to be slim and lightweight.ASUS_I005DA

In terms of specification, the ROG Phone 5 is expected to feature a 6.78-inch display. As per the listing, the gaming phone by Asus will be fuelled by a 6,000mAh battery that supports 65W fast charging. The phone would run Android 11 out-of-the-box and be powered by the Qualcomm Snapdragon 888 SoC.

The ROG phone has also been allegedly spotted in a Geekbench listing with some of its specifications. The device with model number ASUS_I005DA which is believed to be the Asus ROG Phone 5 achieved a single-core score of 1,131 and a multi-core score of 3,729. The listed phone will come with 14.90GB of RAM which suggests there would be a 16GB RAM variant paired with an SoC codenamed “lahaina” which is believed to be the Qualcomm Snapdragon 888.

Komila Singhhttp://www.gadgetbridge.com
Komila is one of the most spirited tech writers at Gadget Bridge. Always up for a new challenge, she is an expert at dissecting technology and getting to its core. She loves to tinker with new mobile phones, tablets and headphones.
Facebook
Twitter
WhatsApp
Linkedin
ReddIt
Email
Previous articleSharp Qnet Zensational Air Purifier KC-G60M-W Review: An ideal choice to purify your home and keep it natural
Next articleHP Pavilion 13, Pavilion 14, and Pavilion 15 Laptops with 11th Gen Intel Core processors launched in India