Xiaomi Mi 11 with Qualcomm Snapdragon 888 SoC launched globally: Everything that we know from pricing to specifications

The Chinese smartphone company has launched its next generation of Mi flagship internationally. Xiaomi Mi 11 has made its official debut globally. The device was launched in China late in December last year. The company was first to bring Qualcomm’s top of the line Qualcomm Snapdragon 888 SoC with the launch of this smartphone series in addition to the global rollout of MIUI 12.5. The flagship series was launched via an online event. Unlike its predecessor, the company has only introduced a single device to the series. The key highlights of the smartphone include a  hole-punch design display,  Harman Kardon-tuned dual stereo speakers, a triple-camera setup on the back of the phones and a 55W fast charging support.

Xiaomi Mi 11 has been introduced globally in two different variants. The price of the 8GB with 128GB storage has been set at EUR 749 that translates to Rs 65,800 while the 8GB RAM with 256GB storage version will come with a price tag of EUR 799 that translates to Rs 70,100. The flagship will be offered in three colour options of Cloud White, Horizon Blue, and Midnight Grey. 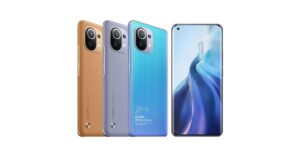 The company is yet to reveal the pricing and the availability details for the Indian market but when Xiaomi Mi 11 made its debut in China the price of the base model which is 8GB RAM with 128GB storage is priced at CNY 3,999. The 8GB RAM with 256GB storage comes at CNY 4,299 and the 12GB RAM with 256GB storage option has been priced at CNY 4,699. Apart from this the company also announced that there will be two retail boxes one with a charger and one without the charger, however, this change will not affect the pricing of the phone as this move is to achieve the environmental goals.

The specification of the global model of Xiaomi Mi 11 remains as the Chinese version. There is a 6.81-inch AMOLED QHD+ display with nits and protected with Gorilla Glass Victus. The phone offers a 120Hz of refresh rate and a 480Hz touch sampling rate support. The device runs on Xiaomi’s MIUI 12.5 out of the box and is powered by Snapdragon 888 SoC paired with 12GB of RAM with up to 256GB of storage. There are also Harman Kardon-powered dual stereo speakers and also includes an in-display fingerprint sensor on the smartphone.

In terms of specifications, Xiaomi M11 features a  triple rear camera setup that includes a  108-megapixel primary sensor with Optical Image Stabilisation and f/1.85 aperture. In addition to this, there is a 13-megapixel ultra-wide-angle lens with f/2.4 aperture and a 5-megapixel Macro lens with f/2.4 aperture. The camera setup is supported by 8K video recording and night video mode for low light images, MEMC video frame technology, real-time SDR to HDR, and video super-resolution support. On the front, there is a single punch-hole camera consisting of a 20-megapixel selfie camera sensor.

Additionally, the phone packs a 6000mAh battery on the phone with a Mi Charge Turbo system and 55W fast charging support along with 10W reverse wireless charging. In terms of connectivity, there is 5G, 4G LTE, Wi-Fi 6, Bluetooth 5.2, GPS, and USB Type-C port.

Komila Singhhttp://www.gadgetbridge.com
Komila is one of the most spirited tech writers at Gadget Bridge. Always up for a new challenge, she is an expert at dissecting technology and getting to its core. She loves to tinker with new mobile phones, tablets and headphones.
Facebook
Twitter
WhatsApp
Linkedin
ReddIt
Email
Previous article15 Microsoft Word keyboard shortcuts every beginner should know and use
Next article15 Microsoft Excel keyboard shortcuts every beginner should know