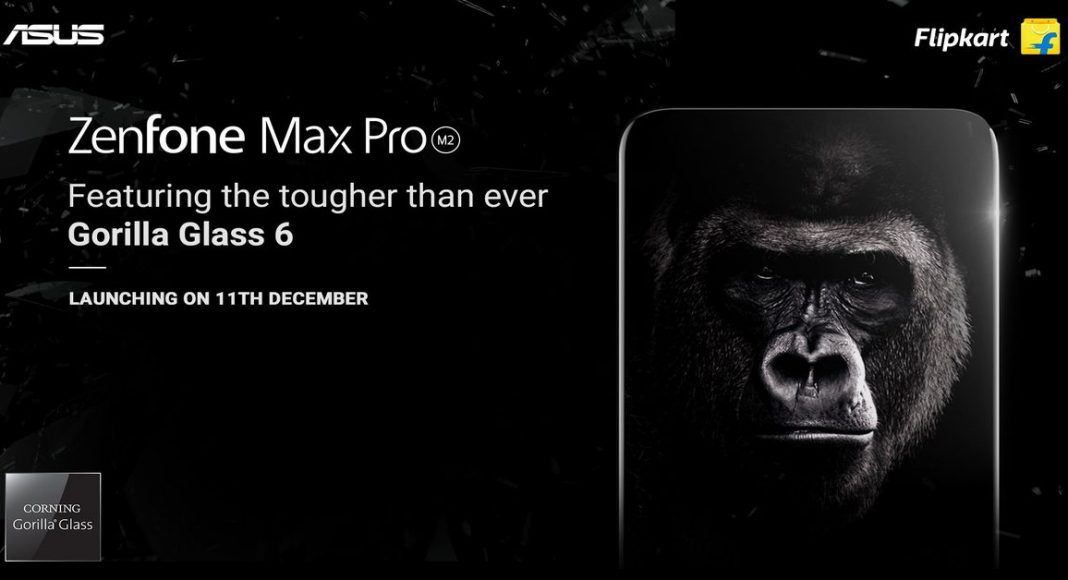 In a tweet from Asus India, the company has confirmed that it will be launching the Zenfone Max Pro M2 smartphone on December 11. It is likely that the two smartphones would be announced by the company on the same day, but that has not been confirmed yet.

The Zenfone Max Pro M2, with Corning® Gorilla® Glass 6, survives up to 15 consecutive drops (as tested in the lab when dropped from waist-height) on an average. Get ready to welcome it on 11th December, exclusively on @Flipkart https://t.co/DCeZuDLcuF#UnbeatablePerformer2dot0 pic.twitter.com/bjgs1oJWDg

The tweet further says that Asus Zenfone Max Pro M2 mobile will be a Flipkart exclusive, much like its predecessor Zenfone Max Pro M1. Asus has also confirmed that Zenfone Max Pro M2 will come with the latest Corning Gorilla Glass and the company claims that the smartphone will sport the most durable screen in the segment.

The unrivalled champion of mid-range is ready to begin its dominance with the most durable screen in the segment – Corning Gorilla Glass 6. The Zenfone Max Pro M2 launches on 11th December, exclusively on @Flipkart. Stay tuned for more. @corninggorilla #UnbeatablePerformer2dot0 pic.twitter.com/Kd2vHKN22B

A teaser of the device revealed that the smartphone will sport a 6-inch display with full-HF resolutions and will come with a notch on its top. Asus Zenfone Max Pro M2 is said to be powered by a Snapdragon 660 processor clubbed with either 6GB or 8GB RAM.

The new handset from Asus is expected to come with a dual rear camera setup with 12MP and 5MP sensors. The device will run Android 9.0 Pie out of the box and like its predecessor Zenfone Max Pro M1, it will have a stock Android experience.

Speaking of Asus Zenfone Max M2, it is said to come with the same processor and display as Zenfone Max Pro M2 smartphone and will be available with 4GB and 8GB of RAM. As of now, there is no word on other specs of the smartphone.

It is being said that the battery and camera details will be confirmed on the day of the launch itself, but if it gets reported before that, we’ll let you know. With these two smartphones, it seems like Asus wants to recreate the success that it saw with Zenfone Max Pro M1. When we used the Asus Zenfone Max Pro M1 (review), we were very happy with it, and with Zenfone Max Pro M2, we are hoping to see a similar or better performance. You can watch a video of the upcoming device here.

Aadvikahttp://www.gadgetbridge.com
Facebook
Twitter
WhatsApp
Linkedin
ReddIt
Email
Previous articleHow to use dual Whatsapp accounts in one smartphone
Next articleVivo NEX 2 to launch on Dec 11, will come with two displays