The company has also updated its Vivobook S lineup. 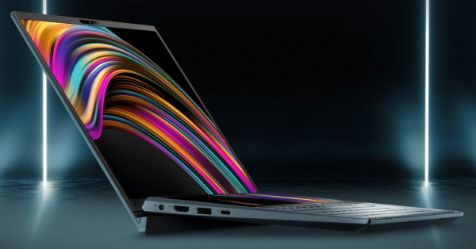 At the CES 2020, Taiwanese technology company Asus has announced its Zenbook Duo laptop, which is basically the younger sibling of the Asus Zenbook Pro Duo that was launched last year. The newly launched Asus Zenbook Duo laptop is 14-inches in size and much like its predecessor, it comes with a secondary “ScreenPad Plus” display. However, while the Zenbook Pro Duo had a 14-inch secondary display, it is 12.6-inches in size on the new one.

It is worth pointing out that besides reducing the screen size in the new laptop, the company has also diminished some of the specifications as compared to the predecessor. Firstly, the new 14-inch Asus Zenbook Dup comes has an FHD screen and not a 4K one. Also, the display is no longer OLED. It should also be added that the processors that have been used are Intel‘s 10th Gen Comet Lake SoCs. These are not as powerful as the H-series chips that were housed in the previous model. Other than this, the Taiwanese technology giant has also added an optional GPU — GeForce MX250.

The optional GPU of the Zenbook Pro Duo laptop — RTX 2060 — was superior to this. Even the RAM is lesser in the new model. While Asus’ Zenbook Pro Duo had 32GB of RAM, the newly launched Zenbook Duo packs only 16GB.

While most of the specifications are inferior as compared to the bigger sibling that was launched last year, Asus Zenbook Duo will definitely prove to be more practical for those who prefer a laptop that is more portable. As of now, Asus has not announced the price of the device. However, since Asus Zenbook Pro Duo was sold at $2,499, we can expect the newly-announced Zenbook Duo to be more affordable than that. However, we wouldn’t have to wait too long to find out as the Taiwanese technology giant has announced that Asus Zenbook Duo will be made available in Q1 2020.

Besides this, the company has also updated its VivoBook S range. All the three models of the range — 13.3-inch, 14-inch and 15.6-inch — will now be available with Intel‘s 10th Gen chipsets. They will also come with up to 16GB of RAM and have optional discrete Nvidia GPUs for cases when the machine required extra power. The upgraded models will either be available in the first or second quarter of this year. Even the starting prices of the new models have to be announced yet.

Avani Baggahttp://www.gadgetbridge.com
Avani has an immense love for reading, travelling and food, but not necessarily in the same order. Avani almost started pursuing law, but life had other (better) plans for her and she chose to be a writer instead (luckily!) She previously covered technology at Times Internet and wrote about smartphones, mobile apps and tech startups. When she’s not writing, you’ll be able to find her in book stores or catching up on her social life.
Facebook
Twitter
WhatsApp
Linkedin
ReddIt
Email
Previous article
CES 2020: LG announces its 2020 OLED TV lineup in four screen sizes
Next article
Moto G8 Plus review: The big battery budget smartphone