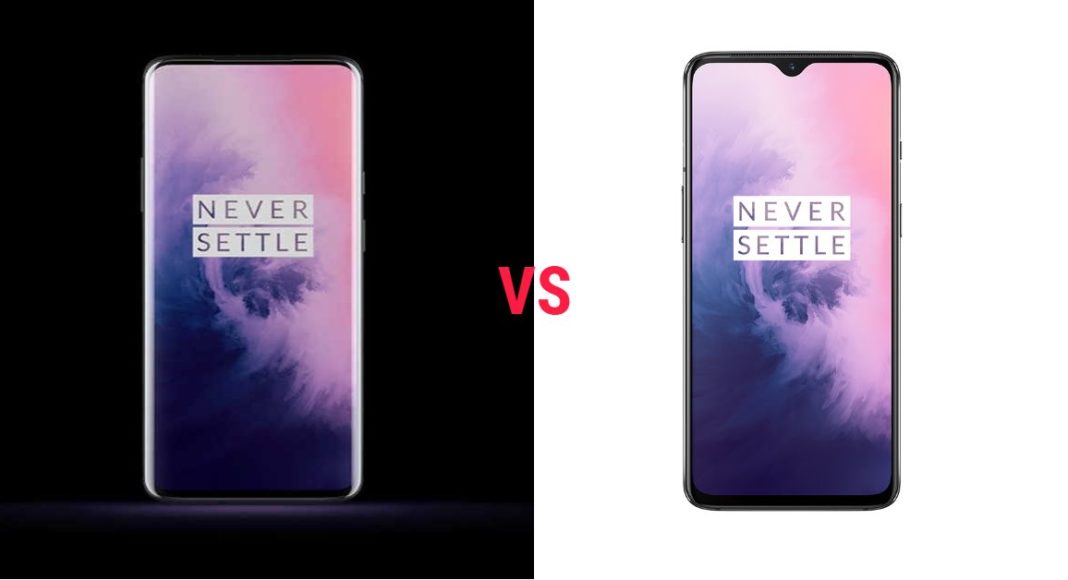 OnePlus 7 Pro has a 6.67-inch Fluid AMOLED display that has a refresh rate of 90Hz, support for HDR10+ and comes with a layer of Corning Gorilla Glass 6 on top. OnePlus 7, on the other hand, has a 6.41-inch Optic AMOLED screen which is also protected with Gorilla Glass 6. Here, we would say that naturally, the winner is OnePlus 7 Pro. This doesn’t come as a surprise as the company had already said that the display used in the smartphone is more expensive than the screens of all the other smartphones. The Fluid AMOLED display filters out the BlueLight filter.

Both OnePlus 7 Pro and OnePlus 7 smartphones are powered by Qualcomm Snapdragon 855 SoC, which is the most powerful processor in the world right now. This means that both the handsets have very smooth performance and will be able to handle almost anything.

OnePlus 7 Pro is available in 6GB, 8GB, and 12GB RAM variants. It has two storage variants: 128GB and 256GB. OnePlus 7 just does not have a 12GB RAM variant, but the other models are the same as its elder sibling. While 12GB RAM is definitely a plus, we think 8GB RAM isn’t any less RAM too and does guarantee a powerful performance. You can really pick whatever suits you. Both the smartphones do not support a microSD card so we would recommend going for the 256GB storage variant if you like having too many apps, games and media files on your handset.

OnePlus 7 Pro smartphone sports a triple rear camera module that comprises of a 48MP primary sensor that has an f/1.6 aperture, OIS and Dual Pixel PDAF; an 8MP telephoto sensor with an f/2.4 aperture and OIS; and a 16MP wide-angle sensor with an f/2.2 aperture with 117-degree field-of-view. OnePlus 7 has a dual rear camera setup with the same primary camera, but the secondary sensor has a 5MP lens with an f/2.4 aperture. If you are someone who loves to do smartphone photography and your Instagram is full of photos taken by you instead of your pictures, then obviously OnePlus 7 Pro makes a better choice. But if you only use your device to click regular images, the 48MP primary sensor of the younger sibling will keep you happy. Both the handsets have a 16MP selfie camera with an f/2.0 aperture.

OnePlus 7 Pro starts at Rs 48,999, while the base variant of OnePlus 7 is priced at Rs 32,999. We should mention that this is even lesser than the starting price of OnePlus 6T, which is its predecessor.

The devices are meant for different budget segments. If you are looking to buy a device in the premium segment, OnePlus 7 Pro will offer you powerful specifications at a price that is lesser than Samsung Galaxy S10’s or iPhone XR’s. However, if you want to stick to the mid-range segment, OnePlus 7 is surely among the best buys that are there. It has the same processor and primary camera as its elder sibling and comes with a good battery and enough RAM too. It’s rare to see a handset that costs lesser than its predecessor and still offers upgraded specifications.