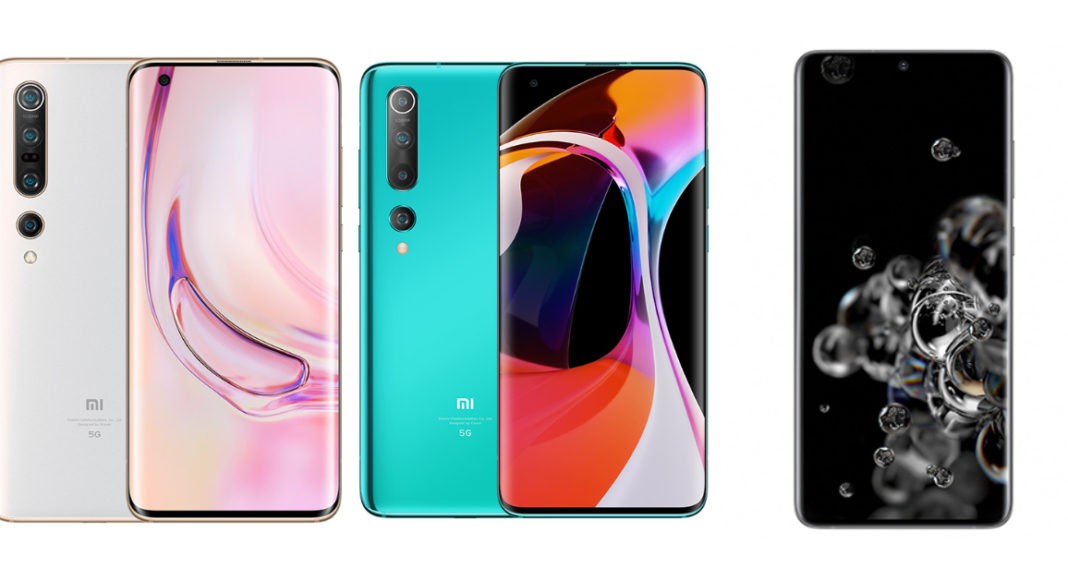 Yesterday the South Korean company Samsung launched its all-new series of Galaxy S20. A day after on Thursday the Chinese smartphone company arrived with the Xiaomi Mi 10 series. Under the series, the company launched two devices Mi 10 and Mi 10 Pro. Both the newly launched devices compete with Samsung Galaxy S20 Ultra in terms of specifications. Samsung’s new handset will be available in the US as well as the Korean markets whereas Mi 10 series will be available in China only. These smartphones will arrive in the Indian market sometime in the last week of February. So if you are planning to have one then read our comparison between Xiaomi Mi 10 Pro, Mi 10 and Galaxy S20 Ultra.

All the three newly launched phones come with quad-camera set up with 108-megapixel Samsung’s ISOCELL Bright HMX sensor. But The Pro variant of the Xiaomi Mi 10 comes with a better camera set up as compared to both the other two smartphones which are its biggest USP. But in the front camera department, Samsung Galaxy S20 Ultra takes on both Xiaomi’s phones as it comes equipped with a 40-megapixel front camera whereas the Mi 10 phones have a 20-megapixel selfie camera. Samsung phones offer a longer battery life as it comes with a 5000mAh battery that is supported by a 45W fast charging. In the hardware department, all three devices are powered by a Qualcomm Snapdragon 855 SoC which is till date the latest processor. It is very hard to decide which amongst the three mobile phones is the best. But if you are on a tight budget then you need to wait for a few more weeks until Xiaomi launched Mi 10 Pro because it might cost you half the price of what you have to pay for Galaxy S20 Ultra.

Komila Singhhttp://www.gadgetbridge.com
Komila is one of the most spirited tech writers at Gadget Bridge. Always up for a new challenge, she is an expert at dissecting technology and getting to its core. She loves to tinker with new mobile phones, tablets and headphones.
Facebook
Twitter
WhatsApp
Linkedin
ReddIt
Email
Previous article
Xiaomi Mi 10 and Mi 10 pro with 108-megapixel Samsung’s ISOCELL Bright HMX sensor launched: Pricing and specifications
Next article
How to find who unfollowed you on Instagram even if you follow them