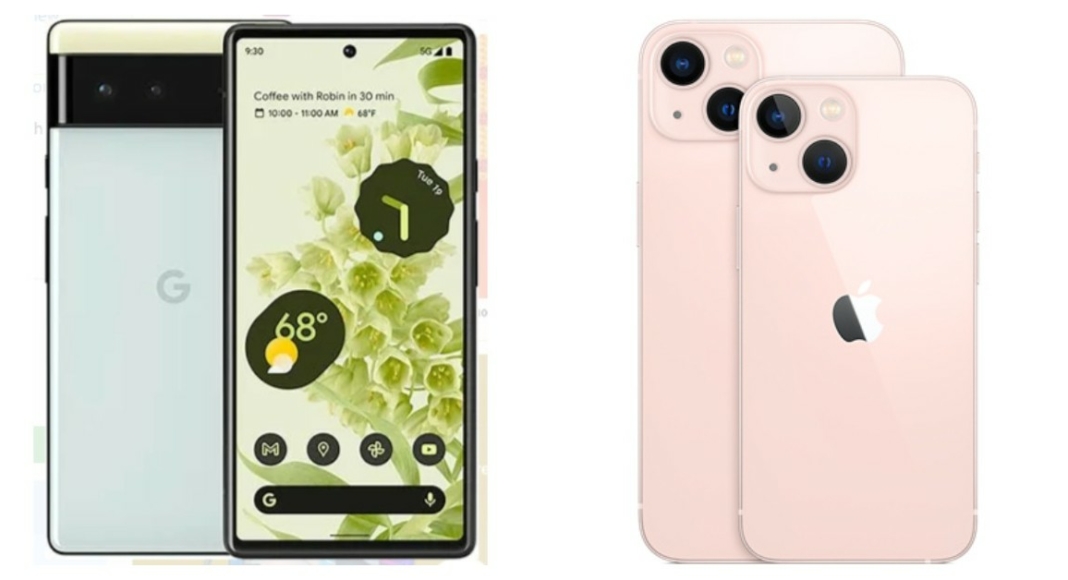 Software giant Google has officially announced the launch of its much-awaited Pixel 6 at its fall event. This premium smartphone is powered by Google’s in-house Tensor chipset. The device is the first to come with Android 12 out of the box. Also recently Google’s biggest Rival Apple announced the iPhone 13 series. Both iPhone 13 and Pixel 6 bear an eye-catching design. But there is a huge price difference between both the phones. Let’s compare both handsets to see which one is more value for money. Google Pixel 6 Vs iPhone 13

Google Pixel 6: 6.4-inch LTPO display and it supports an adaptive refresh rate up to 90Hz.

Google Pixel 6: 50MP primary sensor that binds images down to 12.5MP. There is a 12MP ultra-wide lens

Like we said earlier both the phones come with a fresh design, but the camera rear bar on the Google Pixel 6 not only makes it appear unique but adds premiumness to its form factor.  Also here Apple has a notch for the selfie camera, whereas Google has a punch hole cutout making the screen look appealing and less intrusive.

There is a slight difference in the screen size and resolution. The iPhone offers a 60Hz refresh rate whereas the Pixel comes with 90Hz refresh rate support. The Pixel 6 gives a tough fight to the iPhone 13 in terms of dimensions and cameras. In addition to this, Google’s phone is priced much cheaper than Apple iPhone 13. So if you are planning to upgrade your Android phone then we would recommend you to go for Google Pixel 6.

Komila Singhhttp://www.gadgetbridge.com
Komila is one of the most spirited tech writers at Gadget Bridge. Always up for a new challenge, she is an expert at dissecting technology and getting to its core. She loves to tinker with new mobile phones, tablets and headphones.
Facebook
Twitter
WhatsApp
Linkedin
ReddIt
Email
Previous article
How to connect AirPods Pro to MacBook
Next article
Samsung Galaxy Z Flip 3 Bespoke Edition and Watch 4 Bespoke Edition launched: Here is what’s new this time