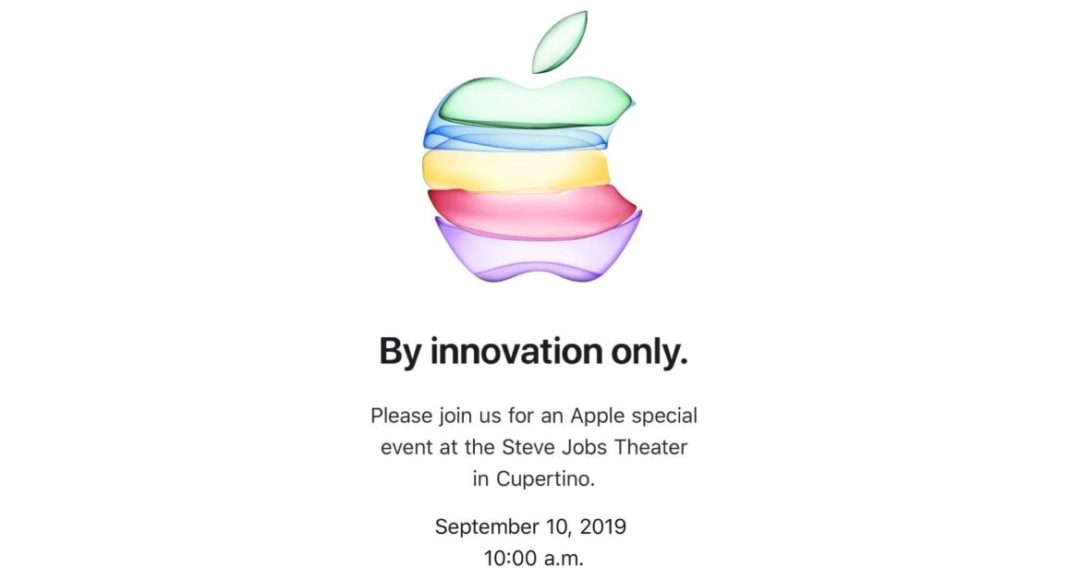 Finally, it’s confirmed the all-new range of Apple’s iPhone 11 will be unveiled on September 10. The company has also started sending invites to the press for the Apple Special Event that will be held at Steves Jobs Theatre in Cupertino, California.

At the Apple Special Event, the company is expected to introduce the new series of iPhone 11. Although the press invite did not bear that the new generation of the iPhone will be unveiled or not. But if we look at the press invite carefully we can see the Apple’s logo donning five vibrant colours dropping a hint that the new iPhone 11 model might be introduced in five new pulsating colour options. But if we go by the rumours the company might launch three new models of iPhone at the September 10’s event.

All the three models will be the successor of the iPhone XR, XS, and XS Max. In which the two models are expected to arrive with a triple rear camera set up and the XS model might also feature a bigger 6.1-inch display screen than its predecessor that owns a 5.8-inch display. Apart from that, we can expect the new series of iPhones to come with better imaging capabilities and a more powerful processor, Bionic A13.

According to some reports that surfaced on the web, the 2019 iPhones could be supported by bidirectional wireless charging feature that will allow the AirPods to charge with the use of the company’s new wireless charging case. Apart from that, the phones might feature Face ID biometric security along with a larger battery and the use of shatter-resistance technology.

Like always the premium smartphone making company will be bringing a few more products this year alongside iPhone 11 models. Last year the company launched Apple Watch Series 4 along with a software update for the HomePod. So as the rumours suggest this year also the company will come up with a new 16inch MacBook Pro along with new iPad and iPad Pro.

Alongside the 2019 iPhone series of smartphone, the company is planning to launch Apple watch in two new casing of titanium as well as ceramic. The upgraded version of the watch will arrive in 40mm along with 44mm sizes similar to the Apple Watch Series 4.

Sources close to Gadget Bridge have confirmed, the price of the smartphones for the Indian audience will be announced right after the event. The base variants of iPhone 11 and iPhone 11 max/pro will lie between Rs 69,999 and Rs 84,999.

Komila Singhhttp://www.gadgetbridge.com
Komila is one of the most spirited tech writers at Gadget Bridge. Always up for a new challenge, she is an expert at dissecting technology and getting to its core. She loves to tinker with new mobile phones, tablets and headphones.
Facebook
Twitter
WhatsApp
Linkedin
ReddIt
Email
Previous article
The latest smartphones from Asus are getting new software updates along with August Google security patches.
Next article
Vivo S1 smartphone review: Looks good and clicks well