COVID-19: Google Maps to show the locations of the public food shelters and public night shelters in India 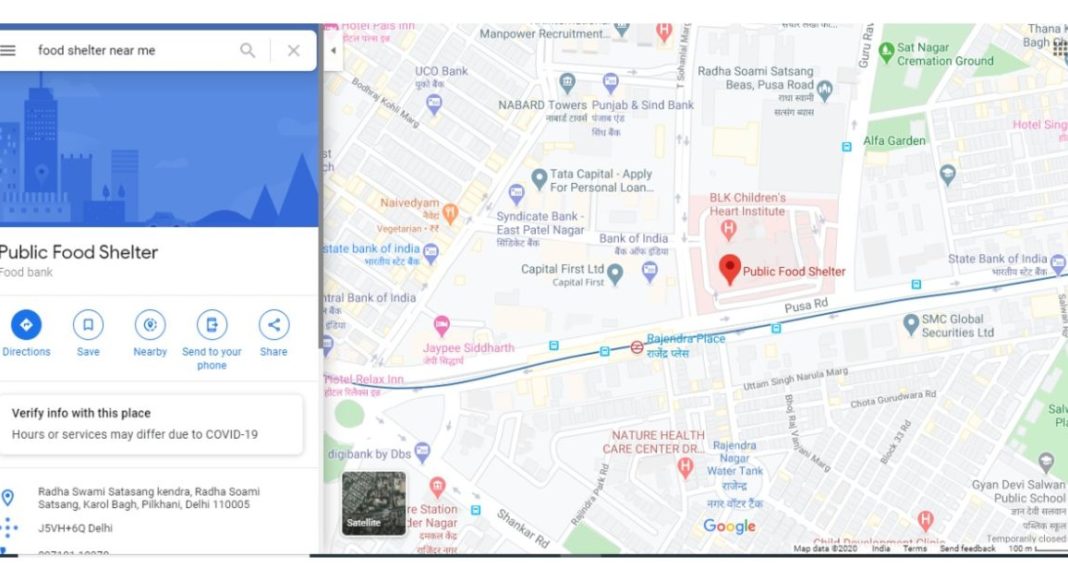 A new initiative has been taken by Google Maps together with the government’s citizen engagement platform MyGov to provide information related to public food shelters and public night shelters across 30 cities in India. The company has been working with the government to provide the location of the relief centers to find essential services during the lockdown situation in the country.

Google in its statement said, “To date, across 30 cities, people can now find these locations on Google Maps, Search and Google Assistant. Users can search for ‘Food shelters in ‘ or ‘Night shelters in ‘ in any of these Google products. The service will also be made available in Hindi soon”

MyGovIndia shared the important piece of information with the public through its official Twitter handle. The Tweet read, “Public Food Shelters and Public Night Shelters can now be found on Google Maps, for 31 cities (more Shelters, Cities being added). Search on Google or Google Maps for “Food Shelter Near Me” or “Night Shelter Near Me” to find the closest shelter.”

In a country like India, those who need the services don’t possess a smartphone so Google will also provide the information to the Jio Phone users with the help of Google Assistant. However, it could have reached the other telecom operators running in the country such as Vodafone Idea and Airtel which could prove to be more beneficial to non-Jio users also. The company is also working to expand the experience to the people in other Indian languages. The search giant has also promised to add additional shelter details on its platform such as Google Maps, Google search as well as Google Assistant in more Indian cities.

Komila Singhhttp://www.gadgetbridge.com
Komila is one of the most spirited tech writers at Gadget Bridge. Always up for a new challenge, she is an expert at dissecting technology and getting to its core. She loves to tinker with new mobile phones, tablets and headphones.
Facebook
Twitter
WhatsApp
Linkedin
ReddIt
Email
Previous article
Vivo V19 global variant launched with dual punch-hole selfie camera and Qualcomm Snapdragon 712 processor
Next article
Top 10 headphones with amazing audio experience under Rs 5,000 category