New Latitude and Precision devices from Dell’s most recent commercial range have been released for businesses. The Latitude 9430, Latitude 7430, and Latitude 7330, along with the Dell Precision 5570, Precision 5470, and Dell Precision 3470, are three new laptops in the Dell commercial series. Commercial devices equipped with 12th Gen Intel Core CPUs and connectivity choices like 5G and Intel Wi-Fi 6E.

The newest 12th-generation Intel Core processors, along with GeForce RTX GPUs from Nvidia, are all features of the new Dell Latitude laptops.

The Latitude 9430 is an ultra-premium computer that features the smallest 14-inch screen with a 16:10 screen-to-body ratio. It comes in new metallic graphite colour and has a new FHD camera for crystal-clear video calls.

The world’s smallest and lightest 13.3-inch premium commercial 16:9 laptop is Dell’s incredibly sturdy and compact Latitude 7330 Ultralight configuration. Its 0.967 kg weight allows it to fit all the ports needed for productivity. The Dell Latitude 7430, on the other hand, has a 14-inch display and a 2-in-1 design.

The laptop has an internal storage capacity of up to 512GB and an Intel Core i7 processor up to the 12th generation, along with up to 16GB of RAM. On the other hand, the Dell Latitude 9430 is an ultra-premium notebook with a 14-inch screen that has a 16:10 aspect ratio. Additionally, the laptop has an FHD camera for higher-quality video calls.

The new Precision 5470 is the most compact, thinnest, and potent 14″ MWS ever created. It has 64GB of DDR5 memory, 4TB of storage, up to 12th Gen Intel Core i9 processors, and one of two NVIDIA RTX A1000 graphics options. The Precision 5470’s cooling system is crucial to its performance because more power generates more heat, especially in such a streamlined design. To solve this problem, Dell experts created a cutting-edge new heat management technology that fits inside the small system’s boundaries without compromising RAM or the useful Thunderbolt connections. 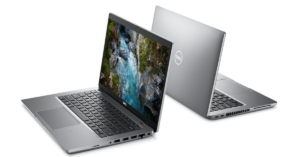 To support the system’s ability to operate at the high speeds required for complex operations, Dell has incorporated a unique Dual Opposite Outlet fan with liquid polymer blades. To enhance hot-air outflow, the business created its first bonded hinge architecture, which also helped to optimise system performance.

The Dell Precision 5570 15-inch MWS is the company’s smallest and thinnest 15-inch MWS, and it has up to NVIDIA RTX A2000 Graphics.

These two mobile workstations are designed for highly mobile creators, engineers, and specialised professionals and feature an immersive edge-to-edge 14″ Infinity Edge display in a small footprint.

The display has a hardware-based low blue light filter called ComfortView Plus, which is TUV-certified. It doesn’t use resources or tamper with the real colour that your ideas should be perceived.

Komila Singhhttp://www.gadgetbridge.com
Komila is one of the most spirited tech writers at Gadget Bridge. Always up for a new challenge, she is an expert at dissecting technology and getting to its core. She loves to tinker with new mobile phones, tablets and headphones.
Facebook
Twitter
WhatsApp
Linkedin
ReddIt
Email
Previous article
What Happens When You Clear Your Cache on Snapchat?
Next article
Websites Like Reddit: 10 Best Alternatives To Reddit In 2022