Here are some of the most recent televisions available on Amazon.in, along with offers and deals from sellers: 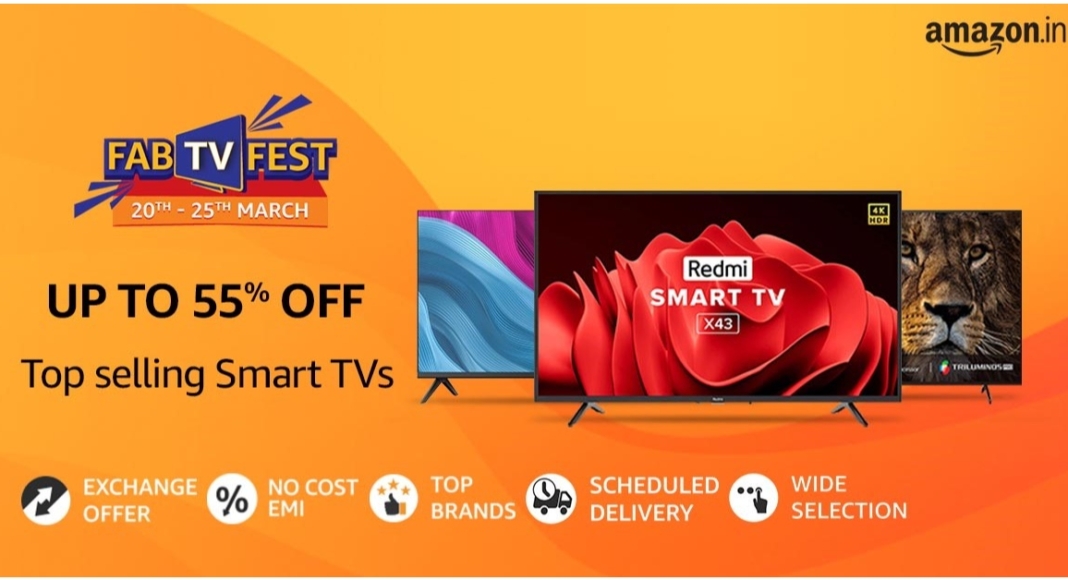 Amazon Fab TV Sale has kicked off in India. During the sale, customers can save up to 55% percent on top-selling Smart TVs, according to the e-commerce website. Companies such as OnePlus, Xiaomi, Redmi, Samsung, Tecno, Kodak, Oppo, and Realme, among others will be putting up their devices for sale. The sale will continue until 25 March.

Amazon has announced the Fab TV Fest, which will bring together a slew of deals and offers on the latest televisions. Customers can save up to Rs 1,500 on their favourite televisions from top brands such as OnePlus, Xiaomi, Redmi, and Samsung.

Fab TV Fest will be available until March 25th, 2022. Customers can get an instant discount of up to Rs 1,500 by using HDFC Bank Credit Cards until March 21st, and ICICI Bank Cards from March 22nd to March 25th. They can also get a 10% cashback of up to Rs 200 off their favourite televisions with Amazon Pay Reward.

Samsung Smart TVs: Get great deals on Samsung TVs such as the Crystal 4K Pro Series and the Wondertainment series starting at Rs 16,990. Get a 10% instant discount up to Rs 1,500 with an HDFC Bank credit card and a 10% cashback up to Rs 200 off with an Amazon Pay Reward on the Samsung Crystal 4K Pro Series for as little as Rs 37,990.

Customers can take advantage of other great deals on Smart TVs from VU, Akai, Onida, Iffalcon, TCL, and other brands starting at Rs 9,899.

Komila Singhhttp://www.gadgetbridge.com
Komila is one of the most spirited tech writers at Gadget Bridge. Always up for a new challenge, she is an expert at dissecting technology and getting to its core. She loves to tinker with new mobile phones, tablets and headphones.
Facebook
Twitter
WhatsApp
Linkedin
ReddIt
Email
Previous article
Sony HT-A9 with SW5 surround sound system review: Sony got it perfectly right this time
Next article
5 Best Sitting-Standing Desks You Can Buy In India Under Rs 30,000