The Free Fire South Asia Showdown: Battle of the Stars tournament will be live-streamed with live commentary in 5 languages – Bengali, English, Hindi, Nepali and Urdu. 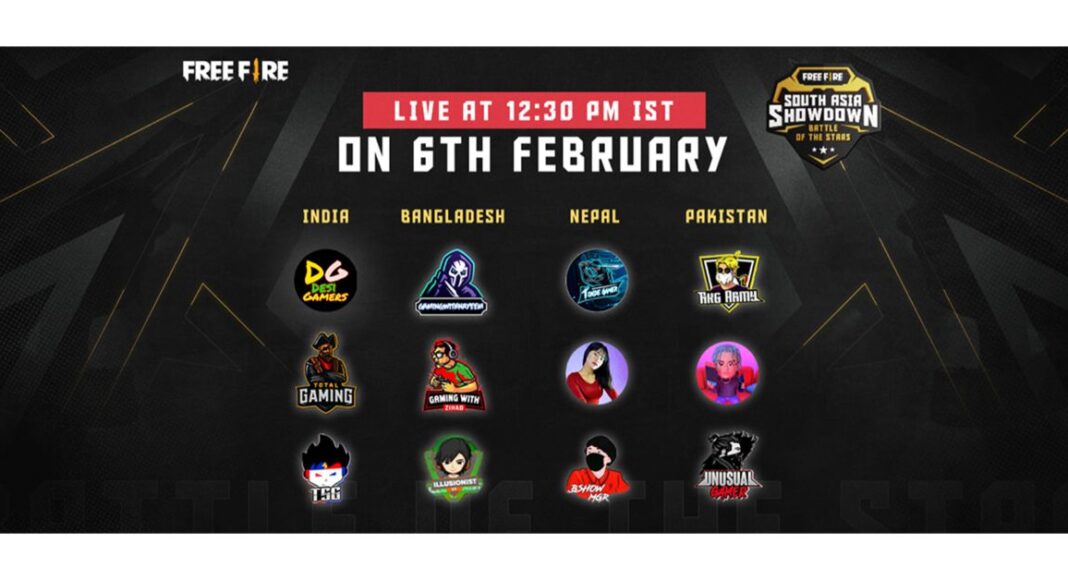 Garena has announced the launch of Free Fire South Asia Showdown: Battle of the Stars, an esports tournament for the South Asia region. tournament to set in motion from February 6 that is going to feature Free Fire streamers and personalities from India, Pakistan, Nepal, and Bangladesh. This esports tournament includes a total of 12 team captains means the top 3 streamers from each of the 4 nations that are going to be battling for a 1 million diamond prize pool.

As we mentioned earlier the Free Fire South Asia Showdown: Battle of the Stars will be featuring some of the gaming community’s favourite Free Fire streamers and personalities from India, Pakistan, Nepal, and Bangladesh. 12 team captains – comprising the top 3 streamers from each of the 4 nations – will lead their teams into battle for a slice of the 1 million diamond prize pool. These streamers will be chosen by public voting from the 4 participating nations.

Additionally, the winners of the Free Fire tournament will receive 500,000 in-game diamonds; the first and second runners-up will be awarded 300,000 and 200,000 diamonds respectively.

Below is a list of team captains for each nation that are invited to participate in the Free Fire South Asia Showdown: Battle of the Stars:

Komila Singhhttp://www.gadgetbridge.com
Komila is one of the most spirited tech writers at Gadget Bridge. Always up for a new challenge, she is an expert at dissecting technology and getting to its core. She loves to tinker with new mobile phones, tablets and headphones.
Facebook
Twitter
WhatsApp
Linkedin
ReddIt
Email
Previous article
How can you transfer your chats and data from WhatsApp to Telegram or Signal?
Next article
How to create, find and join Telegram groups and channels?