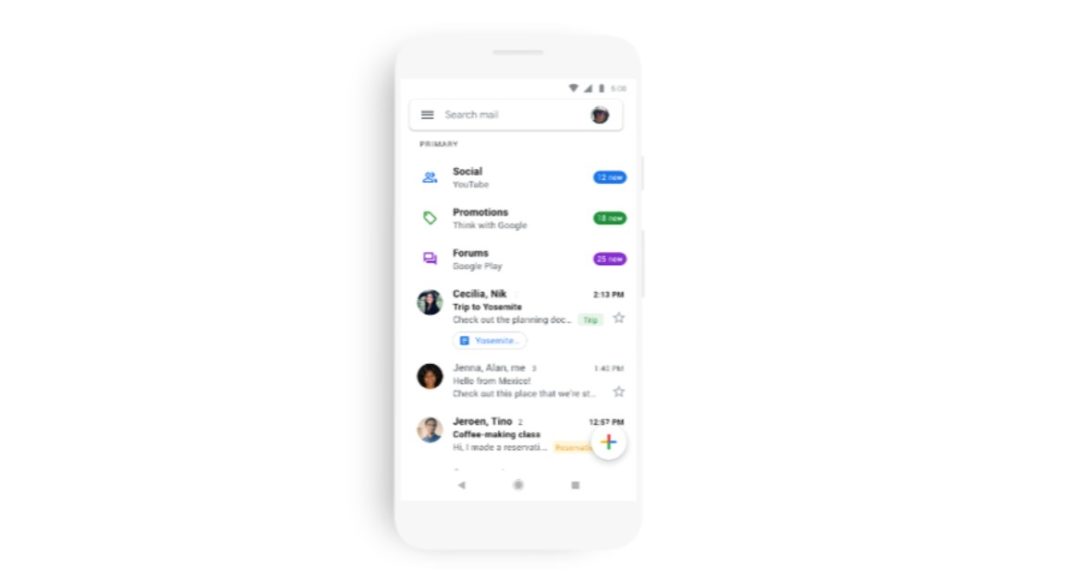 Last year, Google’s email service Gmail got the biggest design change since its inception. And since it got the big design change, Google has been rolling out useful features to Gmail every now and then.

To recall, last month Google announced that it will be rolling out a Material Design update to its email service soon. And today, the search giant has announced a blog post that it has rolled out the update to all its Android users via the Google Play Store.

The update has got some new design elements to Gmail including Google Sans font, that was till now available in Pixel smartphones, and a redesigned search bar that will be placed on top of the device’s display. Furthermore, the red menu bar that used to be a defining feature will not be present anymore. The overall design of the app has also been tweaked and cleaned up to make it look less crowded.

However, there will be some who will find Gmail’s design to be too bright, particularly because the red bar on the top has been replaced by a solid white block now. Some may even want to turn down the brightness level of their devices.

But then, it is just a Material Design update, and even if some may not like the way it looks now, one has to admit, there’s hardly any other email service that has so many useful features packed in it. So it’s highly unlikely that people would switch to something else because of the change in design. As we mentioned earlier, the update is already out on Android and should soon be released on iOS too.

A few days back, Google added another change to Gmail with which, users can access some useful features by just accessing the right-click menu. According to Google, these features would first roll out for G Suite users and would then come to regular Gmail users.

Google said that users would be able to perform various functions just by right-clicking on an email or a conversation. The options in the right-click menu include replying, forwarding, searching for emails from the sender or with the subject of the conversation and more.

Avani Baggahttp://www.gadgetbridge.com
Avani has an immense love for reading, travelling and food, but not necessarily in the same order. Avani almost started pursuing law, but life had other (better) plans for her and she chose to be a writer instead (luckily!) She previously covered technology at Times Internet and wrote about smartphones, mobile apps and tech startups. When she’s not writing, you’ll be able to find her in book stores or catching up on her social life.
Facebook
Twitter
WhatsApp
Linkedin
ReddIt
Email
Previous article
Razer Phone 2 will start getting Android Pie next week
Next article
Samsung Galaxy S10, Galaxy S10+, Galaxy S10e with Infinity-O displays, ultrasonic in-display fingerprint sensors launched: Price and specifications