Last month, Google announced a redesign for Search for Android and iOS devices

In a new update, Google has pushed a new redesign for music-related queries for the desktop version. As per a report, the redesign now shows a navigation drawer to the left side along with the description of the query. If in your queries it is an album then a cover art will appear along with subtopic categories that load new search terms below it.

Last month Google for Android and iOS devices also got a major visual redesign, focusing on important information and bringing a rounded aesthetic. In its aim to simplify the search engine for mobile so that people could find it faster and easier which led to a major visual redesign. As said, in a new development, Google is rolling out a redesign for music-related search queries on desktop too. In a report by 9to5Google, the search giant has been testing this redesign for a while now and as of now, the redesign is applied to music-related search results on Google Search. While other things remain unchanged.

The biggest attraction is its navigation drawer. This would now be seen on the left that shows the name as well as the description of the query. In the case of albums, cover art appears. Below are subtopic categories that load new search terms like Overview, Listen, Videos, etc. The Share button has also been moved here. Whereas on the right there is a Listen Card offering options to listen to the song or album on Spotify, YouTube Music, or other music-streaming platforms. 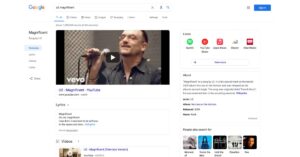 On the other hand, the ‘About’ card below will consist of the Wikipedia description of the song or album. In addition to this, the subtopics sidebar is meant to help users better navigate through dense pages packed with information. Some songs feature different items, like: “Other recordings” and “Analysis.” Google’s intention is to save users from having to manually type out a new search, the report stated.

To recall, last month Google search on mobile also got a major redesign to come with lots of new features such as product price drop cards, neat interface and more. This piece of information was shared by the search giant via a blog post that said, “The beginning of a new year inspires people everywhere to make changes. It’s when many of us take stock of our lives, our careers, or even just our surroundings and think about what improvements we can make. That’s also been the case for Google designer Aileen Cheng. Aileen recently led a major visual redesign of the mobile Search experience, which rolls out in the coming days.”

Komila Singhhttp://www.gadgetbridge.com
Komila is a one of the most spirited tech writers at Gadget Bridge. Always up for a new challenge, she is an expert at dissecting technology and getting to its core. She loves to tinker with new mobile phones, tablets and headphones.
Facebook
Twitter
WhatsApp
Linkedin
ReddIt
Email
Previous articleSamsung Galaxy S21 Ultra Review: A good start to the year for Samsung
Next articleTop 10 websites to find 4K wallpapers for your Mac or PC

Twitter recently revealed a new feature named 'Super Follow' that will enable the users to earn money from exclusive tweets and other content they...
Read more
Gadget Bridge Ace

How to get COVID-19 vaccine in India? How to register yourself on Co-WIN portal for vaccination: a complete guide

The process for the COVID-19 vaccine registration opens today for the general public in India. The registration for the vaccination has begun through the...
Read more

Fastest web browsers for Android Smartphone: We tested the top 3...

Anurag Sharma - Feb 25, 2021 0
Android smartphones have become a crucial part of the lives of many people. We perform several tasks on our smartphones such as calling, texting,...