Google signs an agreement to invest $4.5 billion in Jio Platforms

This is the first investment from Google that aims to accelerate India’s digital economy over the next five to seven years. 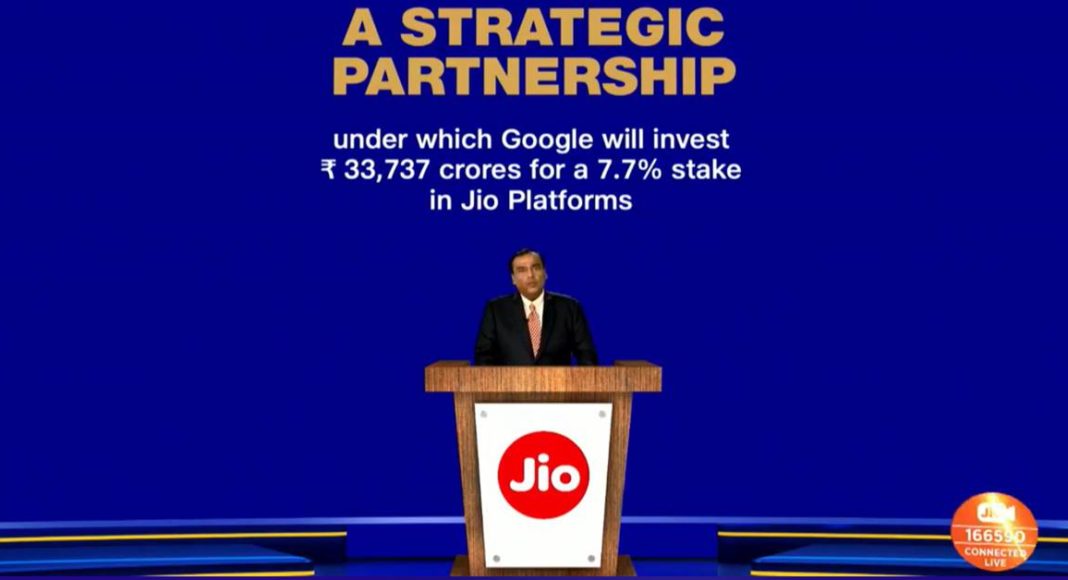 Google has signed an agreement to invest $4.5 billion (Rs 33,737 crore) in Jio Platforms Ltd, taking a 7.73 percent stake in the company, pending regulatory review in India. This is the first investment from the Google For India Digitization Fund announced earlier this week, which aims to accelerate India’s digital economy over the next five to seven years through a mix of equity investments, partnerships, and operational, infrastructure and ecosystem investments.

Google and Jio Platforms have entered into a commercial agreement to jointly develop an entry-level affordable smartphone with optimizations to the Android operating system and the Play Store.

“Together we are excited to rethink, from the ground up, how millions of users in India can become owners of smartphones. This effort will unlock new opportunities, further power the vibrant ecosystem of applications, and push innovation to drive growth for the new Indian economy,” said Sanjay Gupta, Country Head & Vice President, Google India, and Sameer Samat, VP, Product Management.

According to Google, This partnership comes at an exciting but critical stage in India’s digitization. It’s been amazing to see the changes in technology and network plans that have enabled more than half a billion Indians to get online. At the same time, the majority of people in India still don’t have access to the internet, and fewer still own a smartphone—so there’s much more work ahead.

Google’s mission with Android has always been to bring the power of computing to everyone. The tech giant has been humbled by the way Indians have embraced Android over recent years. It believes the time is right to increase its commitment to India significantly, in collaboration with local companies, and this partnership with Jio is the first step. It wants to work with Jio and other leaders in the local ecosystem to ensure that smartphones—together with the apps and services in the Play Store—are within reach for many more Indians across the country. Google further asserts that the pace of Indian innovation means that the experiences it creates for India can ultimately be expanded to the rest of the world.

“For Google, our work in India goes to the heart of our efforts to organize the world’s information and make it universally accessible. We opened our first Indian campuses in Bangalore and Hyderabad in 2004. Since then, we’ve made India central to our Next Billion Users initiative—designed to ensure the internet is useful for people coming online for the first time. We’ve improved our apps and services so they’re relevant in more Indian languages and created offline versions for those facing network constraints. We’ve extended our tools to small businesses, sought to close digital divides with initiatives like Internet Saathi, and we’re increasingly focused on helping India harness AI. More and more, apps we create for India—like Google Pay or our Read-Along language-learning app—influence what we do globally,” a Google blog post revealed.

In partnership, both Google and Jio can draw on each other’s strengths. With this, Google looks forward to bringing smartphone access to more Indians—and exploring the many ways in which it can work together to improve Indians’ lives and advance India’s digital economy.