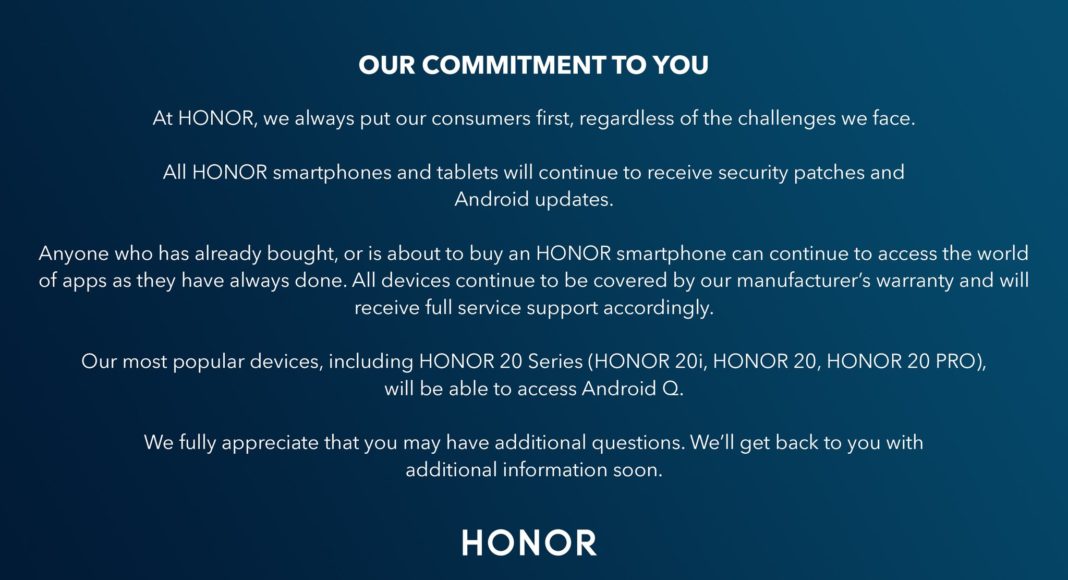 Trump government’s trade ban on Huawei has put the Chinese smartphone maker in a very delicate situation. Due to the trade ban, most of the US based tech companies – Google, Microsoft, Intel, microSD Association etc have stopped their business with them. And due to this, Huawei smartphones will not receive the upcoming Android updates or Google services on their smartphones.

Honor is a sub-brand of the Chinese smartphone maker, Huawei is in the same soup. Similar to Huawei smartphones, the Honor devices too are powered by the same chipset and features mostly the same specifications, as Huawei is the parent company of Honor. And with the trade ban, Honor smartphones too were on line to not receive the Android updates and Google app support, which had put the company in a very tight situation. But today, Honor India has announced that all the Honor smartphones and tablets will continue to receive security patches as well as Android updates.

Huawei ‘s sub-brand Honor took to Twitter to make this announcement, which comes as a surprise nonetheless. The new announcement by Honor India is a bold one because the trade ban was to effect Honor as well as Huawei. Honor India’s full post reads, “At HONOR, we always put our consumers first, regardless of the challenges we face. All HONOR smartphones and tablets will continue to receive security patches and Android updates. Anyone who has already bought, or is about to buy an HONOR smartphone can continue to access the world of apps as they have always done. All devices continue to be covered by our manufacturer’s warranty and will receive full service support accordingly. Our most popular devices, including HONOR 20 Series (HONOR 20i, HONOR 20, HONOR 20 Pro) will be able to access Android Q. We fully appreciate that you may have additional questions. We will get back to you with additional information soon.”

Our commitment to our fans. More information to follow. pic.twitter.com/qXVp1CcdiF

With this announcement, Honor has put itself back to the smartphone market, but people will still see it with some doubt until the Huawei’s trade ban is cleared out. And it also remains to be seen whether Huawei smartphone will receive the new Android Q update or not?

Aman Singhhttps://www.gadgetbridge.com/
Aman Kumar Singh has a Masters in Journalism and Mass Communication. He is a journalist, a photographer, a writer, a gamer, a movie addict and has a love for reading (everything). It’s his love of reading that has brought him knowledge in various fields including technology and gadgets. Talking about which, he loves to tweak and play with gadgets, new and old. And when he finds time, if he finds time, he can be seen playing video games or taking a new gadget for a test run.
Facebook
Twitter
WhatsApp
Linkedin
ReddIt
Email
Previous article
Cardiogram’s health monitoring features are now available to all the Fitbit users globally
Next article
Google will now allow its users to auto delete their location history