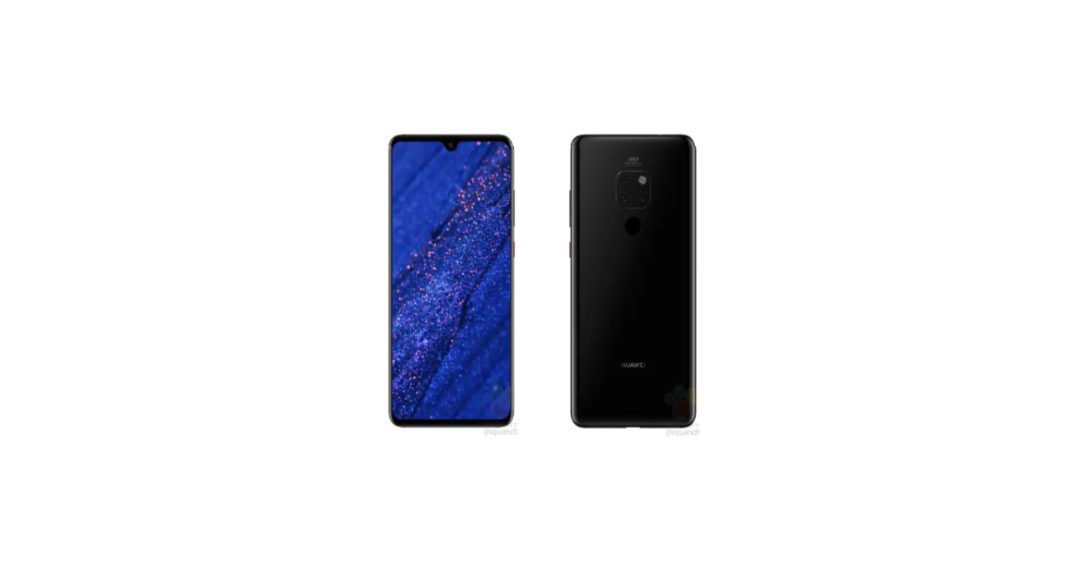 Chinese smartphone manufacturer Huawei’s upcoming flagship phablets Mate 20 and Mate 20 Pro are set to launch at an event in London on October 16. And as the launch date approaches, a number of leaks have revealed a lot about the phablets’ specifications, features and design. And now, the alleged press renders of Huawei Mate 20 have surfaced online. The smartphone in the renders can be seen sporting a waterdrop shaped notch on its display and a fingerprint sensor on its back panel.

The images and specifications leaked by tipster Roland Quandt of WinFuture.de reveal that Huawei Mate 20 will feature a 6.43-inch full-HD+ TFT LCD display that has an aspect ratio of 18.7:9. The notch on the smartphone is smaller than that of Huawei Mate 20 Pro’s and that may be because Mate 20 will not come with laser sensors for facial recognition.

Huawei Mate 20 is expected to be powered by an octa-core HiSilicon Kirin 980 processor and will be available in three storage options — 4GB RAM/64GB storage, 6GB RAM/128GB inbuilt storage and 8GB RAM/512GB of onboard storage. Storage options will vary in different markets and according to different network operators. The smartphone is expected to house a 4,000mAh battery and will come with a nanoSD card slot with a capacity of 128GB.

The upcoming smartphone from Huawei will come with a triple rear camera setup with a 40MP primary sensor. The details of the other two sensors have not been disclosed yet. Unlike its older sibling, Huawei Mate 20 will come with a 3.5mm jack.

It has also been reported that the smartphone may not be launched in all markets, but it will launch in Germany at a starting price of EUR 750. The cost of Mate 20 Pro, on the other hand, will start from EUR 850.

Another report that had emerged in Israel has claimed that the smartphone will be priced at ILS 3,000 and Mate 20 Pro will bear a price tag of ILS 4,000.

The Chinese technology company also has plans to launch its first smartphone in India with Kirin 980 processor in Q4 2018. The said smartphone may be from the Huawei Mate 20 series, but we will have to wait till the launch to be sure about the same.

Avani Baggahttp://www.gadgetbridge.com
Avani has an immense love for reading, travelling and food, but not necessarily in the same order. Avani almost started pursuing law, but life had other (better) plans for her and she chose to be a writer instead (luckily!) She previously covered technology at Times Internet and wrote about smartphones, mobile apps and tech startups. When she’s not writing, you’ll be able to find her in book stores or catching up on her social life.
Facebook
Twitter
WhatsApp
Linkedin
ReddIt
Email
Previous article
Windows 10 October 2018 update may put you at the risk of losing your files
Next article
Lenovo K8 Note successor may launch in India on October 16