Huawei Mate 30 series to be launched on September 19 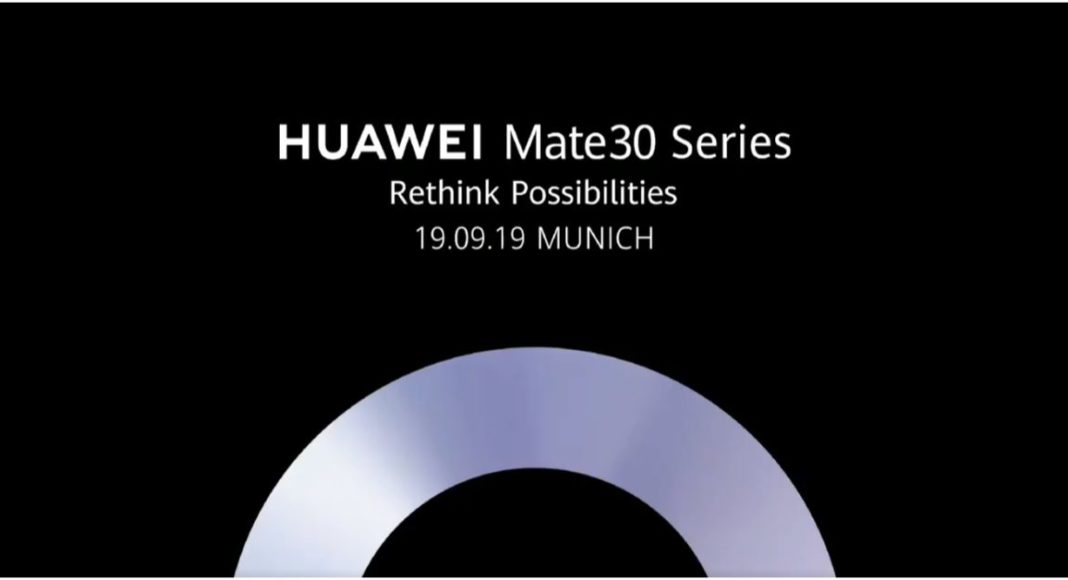 The Chinese smartphone company Huawei is all geared up to launch its new series of smartphones in the market. For the past couple of months, the internet is flooded with leaks and rumours with regard to Huawei Mate 30 series. And now the company has finally revealed the official launch date for the upcoming series of smartphones by Huawei. The company has officially announced that it will be launching three devices under the Huawei Mate line up on September 19 in Munich. It was earlier reported that all the three upcoming smartphones will be launched at an event and the Huawei Mate 30 Lite as Huawei Nova 5i Pro in some of the markets.

Huawei took to the Twitter and officially announced that Huawei Mate 30, Huawei Mate 30 Pro, and the Huawei Mate 30 Lite on September 19. In addition to this, the company also shared a short teaser video on its official Twitter account.  All the phones are expected to come with a quad rear camera set up placed in a circular module.

Did you get it right? The countdown to #HuaweiMate30 starts now!
We're going full circle in Munich on 19.09.2019.
Join us live: https://t.co/9ugi5gG9ci#RethinkPossibilities pic.twitter.com/etRYjrBVEC

As per a promotional image Huawei Mate 30 series of smartphones are expected to be powered by the company’s own Kirin 990 SoC. The rumours and reports suggest that Huawei Mote 30 Pro will be housing the latest Sony IMX600 series sensors that include 40-megapixel primary camera along with a variable aperture of f/1.6 – f/1.4, a 1/1.5-inch sensor, an RYYB pixel layout, and Cine Lens feature. Along with another 40-megapixel secondary camera with a 1/1.8-inch aperture and a 120-degree ultra-wide lens will also come with Cine Lens support, an 8-megapixel telephoto sensor that will come with 5X zoom capabilities, and the while the fourth one is expected to come with periscope lens.

The leaked renders suggest that Huawei Mate 30 Pro will be sporting a curved display along with a  wide notch housing 3D face unlock sensors. It is rumoured to come with an OLED display with a 90Hz refresh rate while on the other hand, Huawei Mate 30 will come with a flat display panel. Instead of featuring a Corning Gorilla Glass it will come equipped with AirGlass along with a SuperSensing camera.

Previously the case renders of the Huawei Mate 30 also surface on the web. The leaked case renders suggest that the upcoming phone will be featuring triple rear cameras positioned in a spherical module along with a wide notch.

On the other hand, the Lite variant of the Mate 30 has also received the certification from the Chinese regulatory TENAA. As per the TENAA listing, Huawei Mate 30 Lite will be featuring a quad-camera setup at its rear panel and a fingerprint sensor placed beneath the camera setup. The quad-camera setup comes fitted in a square module. It is rumored that the company will be launching the renamed version of the smartphone in European markets as Nova 5i Pro.

Komila Singhhttp://www.gadgetbridge.com
Komila is one of the most spirited tech writers at Gadget Bridge. Always up for a new challenge, she is an expert at dissecting technology and getting to its core. She loves to tinker with new mobile phones, tablets and headphones.
Facebook
Twitter
WhatsApp
Linkedin
ReddIt
Email
Previous article
Samsung Galaxy Fold will have a cheaper variant also with 256GB storage
Next article
Motorola One Action goes on Open Sale in India: Details