Huawei’s upcoming flagship smartphones, the Huawei P30 and P30 Pro are set to launch by the company on March 26 in Paris, France. But, before the official launch of the device, images have been leaked online showing Huawei’s upcoming devices in full detail. Although the exact origin behind the leak is not known, some say it could be another marketing strategy of the company before the official launch of the device only days away. The images show that the upcoming Huawei smartphones will come equipped with triple-rear camera setup, not in Huawei Mate 20 Pro’s alignment, but in a vertical stack.

According to the leaked images, the back of the device shows the glass finish with a coloured gradient look. The device has the Leica branding just below the camera as we saw before in Huawei Mate 20 Pro. While at the front, there is a water-drop notch along with a slightly thick bezel on the bottom of the screen. The images also show a dual-curved display on top of the Huawei P30 Pro. There is a power button along with volume rockers on the right side of the device.

Earlier, it was predicted that the Huawei P30 and Huawei P30 Pro might come with a quad-camera setup but these leaked images tell another story. They show that the devices sports triple-rear camera with a LED flash set in a vertical alignment on the left of the cameras. Reports do suggest the device might get a ToF sensor at the back, too. In the images, with the smartphone, there is also a Sonos-branded speaker along with wireless charging pad. But it is still unclear if the Sonos-branded speakers will be a smart speaker or regular Bluetooth speaker. 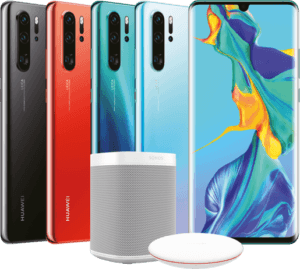 Further news is awaited about the new devices once they see the light of the day on March 26 in Paris.

Aman Singhhttps://www.gadgetbridge.com/
Aman Kumar Singh has a Masters in Journalism and Mass Communication. He is a journalist, a photographer, a writer, a gamer, a movie addict and has a love for reading (everything). It’s his love of reading that has brought him knowledge in various fields including technology and gadgets. Talking about which, he loves to tweak and play with gadgets, new and old. And when he finds time, if he finds time, he can be seen playing video games or taking a new gadget for a test run.
Facebook
Twitter
WhatsApp
Linkedin
ReddIt
Email
Previous article
Samsung Galaxy A30 Review: Premium looks and display come with a long battery life
Next article
How to make the most out of your Google storage