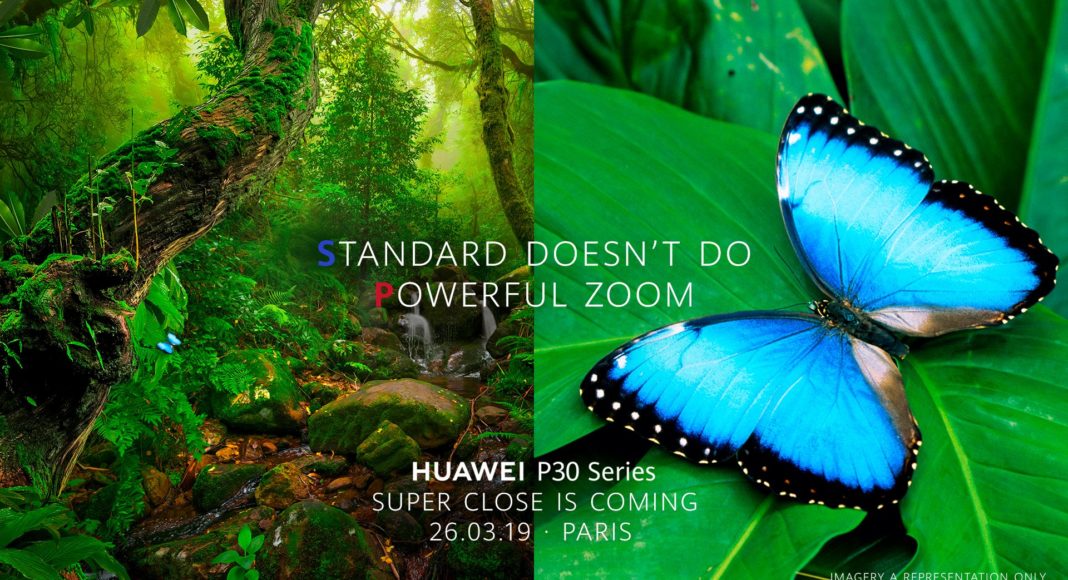 However, the has company confirmed that they will be showing their flagship device – the Huawei P30 series at another event in Paris on March 26. Huawei was seen teasing its flagship smartphone, the Huawei P30 series and its camera samples on its official Twitter handle. Just like Huawei Mate 20 Pro where its cameras were the main focus of the phone, the P30 will be no different. Showcasing the new features along with camera samples from the unreleased phone could mean that the company has put cameras similar to or better than Mate 20 Pro.

Recent tweets from the company hints the presence of lossless zoom in the Huawei P30 series of smartphones. The tweet read, “The competition isn’t even close. A better zoom is coming on 26.03.2019,” where picture of a butterfly is shown. In one half of the picture, the butterfly is shown in a forest while in the other half the zoomed in picture of the butterfly is shown. There is a text on the image which reads “Standard doesn’t do Powerful zoom,” with S and P in different letters. Before the launch of the smartphone, the company is challenging its competitors.

Earlier, the CEO of Huawei, Richard Yu posted a picture of the moon of Weibo, China’s social networking website, which also suggests that the P30 might come with lossless zoom. The P20, which is the predecessor of the Huawei P30 had 5x hybrid zoom. And knowing the company we can say that the next iteration in the P series will have more features than its predecessor.

Chinese smartphone maker, Oppo is also developing its own 10x hybrid lossless zoom technology and we might get to see it in the future Oppo phones. If that happens then we can say that the Huawei P30 will give tough competition to the Oppo’s upcoming smartphone with the same tech.

Aman Singhhttps://www.gadgetbridge.com/
Aman Kumar Singh has a Masters in Journalism and Mass Communication. He is a journalist, a photographer, a writer, a gamer, a movie addict and has a love for reading (everything). It’s his love of reading that has brought him knowledge in various fields including technology and gadgets. Talking about which, he loves to tweak and play with gadgets, new and old. And when he finds time, if he finds time, he can be seen playing video games or taking a new gadget for a test run.
Facebook
Twitter
WhatsApp
Linkedin
ReddIt
Email
Previous articleHow to share your real time location with others using Google Maps
Next articleSamsung Galaxy S10 series to go on pre-orders sale via Flipkart starting February 22