South Korean technology giant Samsung has launched its first foldable phone. After months of speculations following the company’s developer conference in November 2018 where it gave a first look at the foldable phone, Samsung unveiled the much-talked-about smartphone at its Galaxy Unpacked event in San Francisco. The device is called Samsung Galaxy Fold and it comes with two displays – a 7.3-inch screen that appears when it is unfolded and a 4.6-inch screen that can be seen once it is folded.

Samsung Galaxy Fold is being marketed as a luxury smartphone that is not meant for the masses but only for those who want to experience the latest technology.  Samsung Galaxy Fold will go on sale in select markets in April this year. Samsung has said that in order to make sure that Galaxy Fold’s folding mechanism works efficiently, the company has added a hinge to the device that comes with interlocking gears.

However, this hinge cannot be seen on the outside and Samsung has done this to ensure that the design of the smartphone doesn’t get hampered. Here’s a look at the price, availability and specifications of Samsung Galaxy Fold smartphone:

Samsung has announced that its Galaxy Fold smartphone will go on sale starting April 26 in select countries. Samsung Galaxy Fold is priced at $1,980 which, on conversion becomes Rs 1,41,300. The device will be available in Green, Blue, Silver and Black colour variants and can be bought with 4G LTE as well as 5G connectivity.

Speaking about the specifications of the Samsung Galaxy Fold smartphone, it is powered by a 7nm unnamed processor, which is speculated to be Snapdragon 855 SoC. As we mentioned earlier, the device comes with two displays. When the device is unfolded into a tablet, it can be seen with a 7.3-inch Infinity Flex Dynamic AMOLED panel with 1536×2152 pixels and an aspect ratio of 4.2:3. And when it is folded into a candy bar phone, its 4.6-inch Super AMOLED panel with 840×1960 pixels resolution and 21:9 aspect ratio can be seen.

Samsung Galaxy Fold comes with 12GB of RAM and 512GB of internal storage, however, it does not have any support a microSD card. The batteries of the smartphone have a combined capacity of 4,380mAh.

Samsung Galaxy Fold comes with six cameras, among which three are placed on its back panel, two can be accessed when the device is unfolded, and the last one is placed on the front which can only be seen when it is folded into a candy bar phone. Speaking of the triple rear camera setup, it comes with a 16MP ultra-wide sensor with an f/2.2 aperture, a 12MP wide-angle sensor that comes with dual pixel AF and has a variable aperture of f/1.5 to f/2.4, and a third 12MP telephoto lens with PDAF and an f/2.4 aperture clubbed with 2X optical zoom. The cameras also come with Optical Image Stabilization. 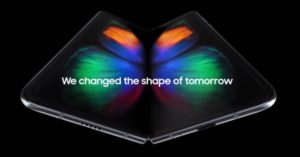 Samsung Galaxy Fold smartphone runs Android Pie skinned with Samsung’s OneUI software. The device can run three apps simultaneously when it is unfolded and being used in its 7.3-inch mode. Another key feature that is available on the device is App Continuity, that allows a seamless transition from larger to the smaller screen and vice versa so that you can use apps in any mode without having to start over again when switching modes. Samsung claims that apps like YouTube, WhatsApp, and Microsoft Office have been optimized especially so that they run smoothly on the Samsung Galaxy Fold smartphone.

Avani Baggahttp://www.gadgetbridge.com
Avani has an immense love for reading, travelling and food, but not necessarily in the same order. Avani almost started pursuing law, but life had other (better) plans for her and she chose to be a writer instead (luckily!) She previously covered technology at Times Internet and wrote about smartphones, mobile apps and tech startups. When she’s not writing, you’ll be able to find her in book stores or catching up on her social life.
Facebook
Twitter
WhatsApp
Linkedin
ReddIt
Email
Previous article
Google likely to showcase it’s game console at Game Developer conference
Next article
Samsung Galaxy S10+ vs Apple iPhone XS Max: Comparison