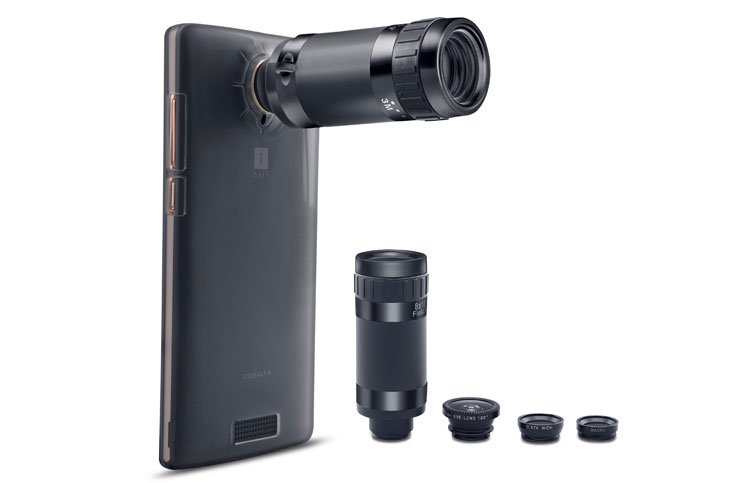 The Indian smartphone manufacturer iBall has expanded its Cobalt series with the launch of mSLR Cobalt4. The company has priced the device for Rs 8,499 and offers lens mount and four lenses with it. The four lenses include a zoom lens with 8x zoom, a fisheye lens with a 175-180 degree viewing angle, a macro lens with 10x magnification and minimum object distance of 10-15mm, and a wide-angle lens with a 130-degree viewing angle. The firm will also be offering a free pouch and a cleaning cloth with the smartphone.

Speaking about the device, Sandeep Parasrampuria, Director, iBall said, “We are very excited with our newest launch which revolutionizes and redefines smartphones. With mSLR Cobalt4 the users shall be mesmerized on the Smartphone’s Camera with detachable lenses. The Multiple options of the lens shall snap great pictures and change the way photographs are captured on the smart phones! Its again heartening that we are the first in India to launch a product with this technology.”

Talking about the specifications, the iBall mSLR Cobalt4 flaunts a 5-inch qHD display with 960×540 pixels resolution. The dual SIM smartphone runs on Adnroid 4.4 KitKat operating system. Powering the smartphone is a 1.4 GHz octa-core processor coupled with 1GB of RAM. The internal storage of the device accounts to 8GB which can be expanded up to 32GB using microSD card.

The iBall mSLR Cobalt4 comes equipped with an 8.0-megapixel rear camera with dual LED flash and a 3.2-megapixel front facing camera for clicking selfies. The device packs in a 2,000 mAh battery and offers 3G, WiFi, Bluetooth and GPS as connectivity options.