In India Oppo will Oppo K10 5G will be powered by MediaTek Dimensity 810 SoC, Oppo confirms

Most of the specifications of Oppo K10 5G will be similar to the Chinese variant. 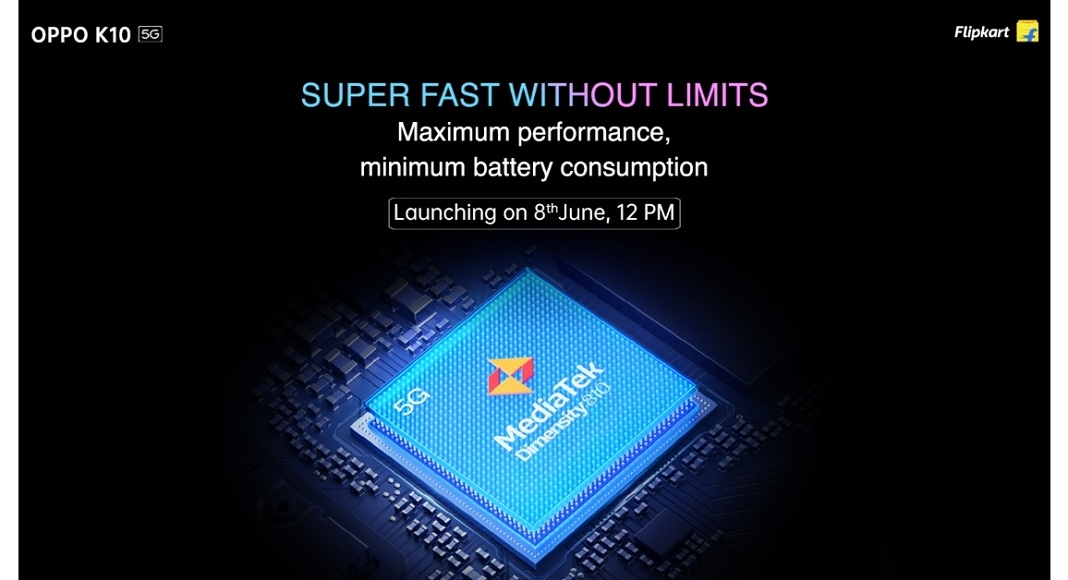 Oppo took to Twitter to announce that Oppo K10 5G will be powered by the MediaTek Dimensity 810 SoC with 5G instead of MediaTek Dimensity 8000-Max SoC which powers the Chinese variant that was released earlier. The upcoming smartphone’s Flipkart microsite was also recently unveiled. Oppo has stated via Twitter that the smartphone will be available on Flipkart in India on June 8 at 12 p.m. As per the Chinese firm, the handset will have an ultra-slim design and an Oppo Glow colour.

According to a recent leak, the Oppo K10 5G would have a 6.56-inch display with a refresh rate of 90Hz. The forthcoming handset is likely to include 8GB of RAM and 128GB of UFS 2.2 storage. In India, the Oppo K10 5G could ship with Android 12 pre-installed.

According to reports, the handset will have a 48-megapixel primary rear camera and a 2-megapixel depth sensor. It is believed to have an 8-megapixel selfie camera on the front. A 5,000mAh battery with 33W fast charging capabilities could be included in the smartphone. A side-mounted fingerprint sensor and dual-speaker system are also planned.

The 6.59-inch hole-punch display on the Oppo K10 5G in China, on the other hand, features a 120Hz refresh rate. A MediaTek Dimensity 8000-Max SoC powered the phone, which had three back cameras. A 67W quick charger was also included.

Komila Singhhttp://www.gadgetbridge.com
Komila is one of the most spirited tech writers at Gadget Bridge. Always up for a new challenge, she is an expert at dissecting technology and getting to its core. She loves to tinker with new mobile phones, tablets and headphones.
Facebook
Twitter
WhatsApp
Linkedin
ReddIt
Email
Previous article
Apple WWDC 2022: What surprises are in store for us from Apple?
Next article
How To Save Money On Your Microsoft Office 365 Subscription?