Infinix Zero 8 with a 48-megapixel selfie camera and a 90Hz refresh rate screen launched: Details inside 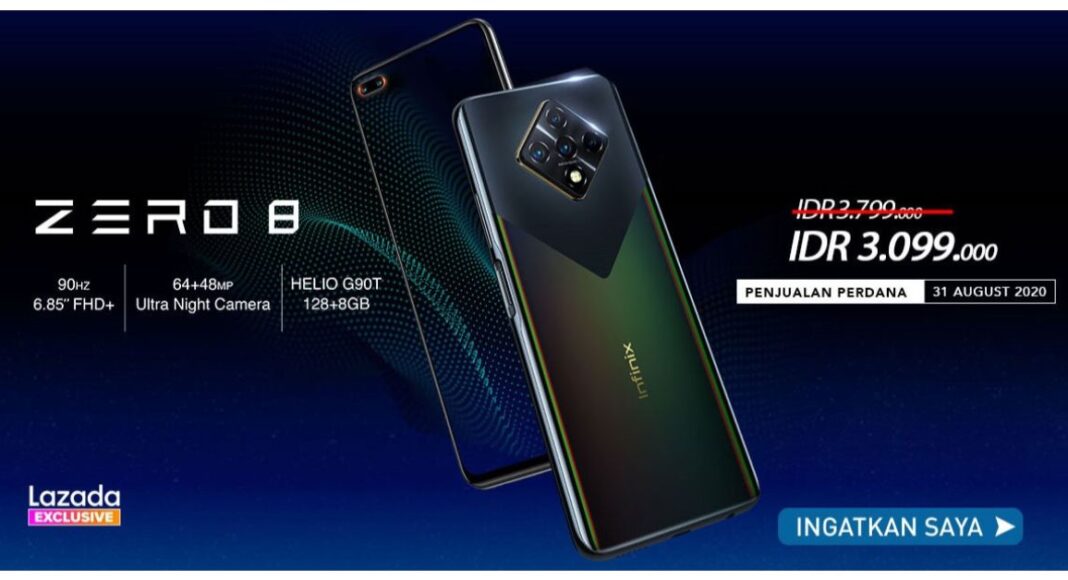 Transsion Holdings group today announced the launch of its new smartphone in the market under its brand Infinix. The company has launched its new mid-ranger Infinix Zero 8 in the Indonesian market. The device is the successor to Infinix Zero 6, which was announced last year. It comes with a diamond-shaped quad rear camera module with LED Flash. There is a high refresh rate panel of 90Hz on the phone. Apart from that, the smartphone runs on MediaTek Helio G90T SoC. That’s the key highlights of the mobile phone, read on to know more.

Infinix Zero 8 has been launched in Indonesia in a single 8GB of RAM with 12GB of storage priced at IDR 3,799,000 that translates to Rs 19,200. The smartphoBut for a limited time offer the company will be making the device available at IDR 3,099,000 that translates to Rs 15,700 via Indonesian online store Lazada.ne will be offered in three colour options Black, Blue, and White. It is set to go on sale there starting August 31.

The Infinix Zero 8 comes with a 6.85-inch full-HD+ display panel with a 90Hz refresh rate and a 180Hz touch sampling rate. Also, there is a dual-hole punch to house two selfie cameras on the phone. Under the hood, there is an octa-core MediaTek Helio G90T processor paired with 8GB of RAM and 128GB of storage which can be expanded using a microSD card. In addition to this, the mobile phone runs on XOS 7 on top of Android 10.

For taking photos and videos the Infinix Zero 8 features a four-camera on the back of the phone placed inside a diamond-shaped camera module. The set up includes a 64-megapixel Sony IMX696 sensor, an 8-megapixel ultra-wide-angle lens along with a depth sensor for portraits and a macro lens. On the front, there is a dual front camera set up on the smartphone that includes a 48-megapixel sensor as well as an 8-megapixel ultra-wide-angle lens.

The Infinix Zero 8 boasts a 4,500mAh battery which comes with 33W fast charging support. In addition to this, there is a side-mounted fingerprint scanner for security.

Komila Singhhttp://www.gadgetbridge.com
Komila is one of the most spirited tech writers at Gadget Bridge. Always up for a new challenge, she is an expert at dissecting technology and getting to its core. She loves to tinker with new mobile phones, tablets and headphones.
Facebook
Twitter
WhatsApp
Linkedin
ReddIt
Email
Previous articleGoogle Duo soon introducing a Beta on Android TV
Next articleAmazon Halo band and companion app introduced for tech freaks