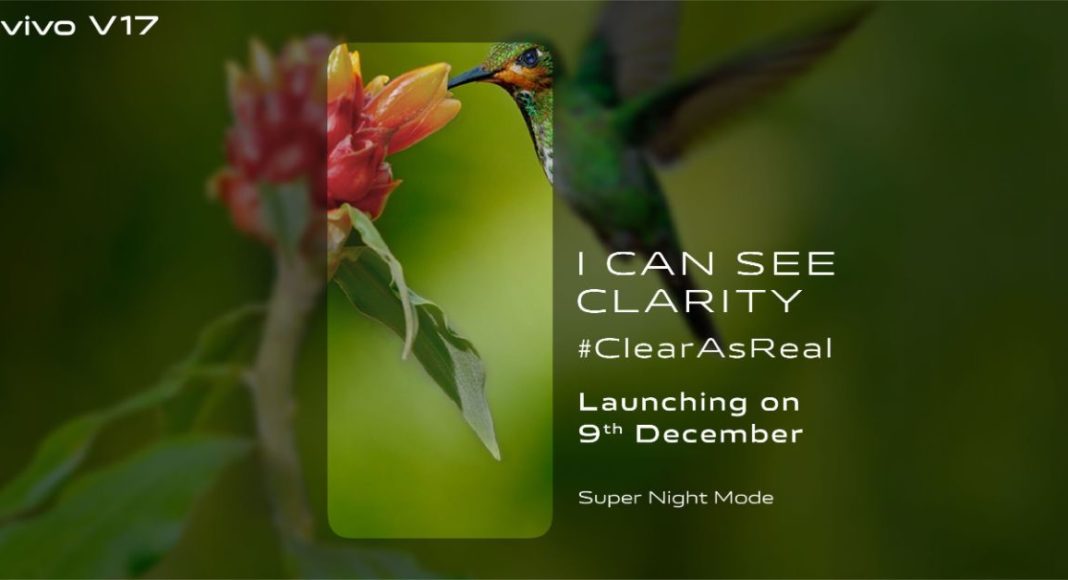 Clearing all the speculation the Chinese smartphone manufacturer Vivo has now confirmed that the phone that is ready to be launched on December 9 in India is, in fact, the Vivo V17. Last week Vivo also launched an invite poster that only hinted that it is coming up with a new smartphone in India on December 9.

Many reports said that on December 9 Vivo will be launching Vivo S1 Pro, which is also a rebranded version of the phone in India. But now the company took to Twitter for confirming that it will be launching a Vivo V17 on the said date at 12 noon IST. In addition to this, the company also confirmed that the upcoming mobile phone will be featuring a 32-megapixel front camera.

Previously we also reported that Vivo has already launched the phone with a waterdrop style notch, but the India variant will arrive with a hole-punch display. Many reports have been pouring in with regards to its specifications, design, price, etc. But today we came across a 9-second long video that gave us the first glimpse of Vivo V17.

The first hands-on video of the Vivo V17 gives us the idea of the phone’s blueprint. The video confirmed that the device will arrive with a hole punch display along with an L shaped camera set up that will be seen positioned on the top left corner of the smartphone. The camera module has an LED flash placed on the right side of it. While on the bottom left corner you will see the Vivo branding. The phone is seen donning a greyish-black colour on the rear back panel. The exclusive hands-on video was first shared by 91Mobiles.

Vivo V17 is expected to feature a 6.44-inch FHD+ OLED ‘iView’ punch-hole display with a 91.38 percent screen-to-body ratio along with an optical in-display fingerprint scanner. The phone is said to be powered by Qualcomm Snapdragon 675 processor with 8GB of Ram and 128GB of internal storage. The phone will run on FunTouch OS 9 based on top of Android 9 Pie. The phone will house a 4,500mAh battery supported by an 18W fast charging technology.

Now coming on the cameras, Vivo V17 will be featuring an L shaped camera module comprising of quad cameras. The set up will include a 48-megapixel main sensor, an 8-megapixel camera and dual 2-megapixel camera sensors. While on the front there will be a 32-megapixel selfie camera.

The phone will be launched in two colour options Glacier Ice and Midnight Ocean. As per reports, Vivo will launch Vivo V17 with a price tag of Rs 20,000 and can be purchased in both online as well as offline stores in the country.

Komila Singhhttp://www.gadgetbridge.com
Komila is one of the most spirited tech writers at Gadget Bridge. Always up for a new challenge, she is an expert at dissecting technology and getting to its core. She loves to tinker with new mobile phones, tablets and headphones.
Facebook
Twitter
WhatsApp
Linkedin
ReddIt
Email
Previous article
BenQ 24-inch eye care monitor GW2480T launched in India at Rs 11,990
Next article
Canon EOS M200 launched in India at Rs 43,995