The Multi-Display laptops by Intel are prototypes as of now. 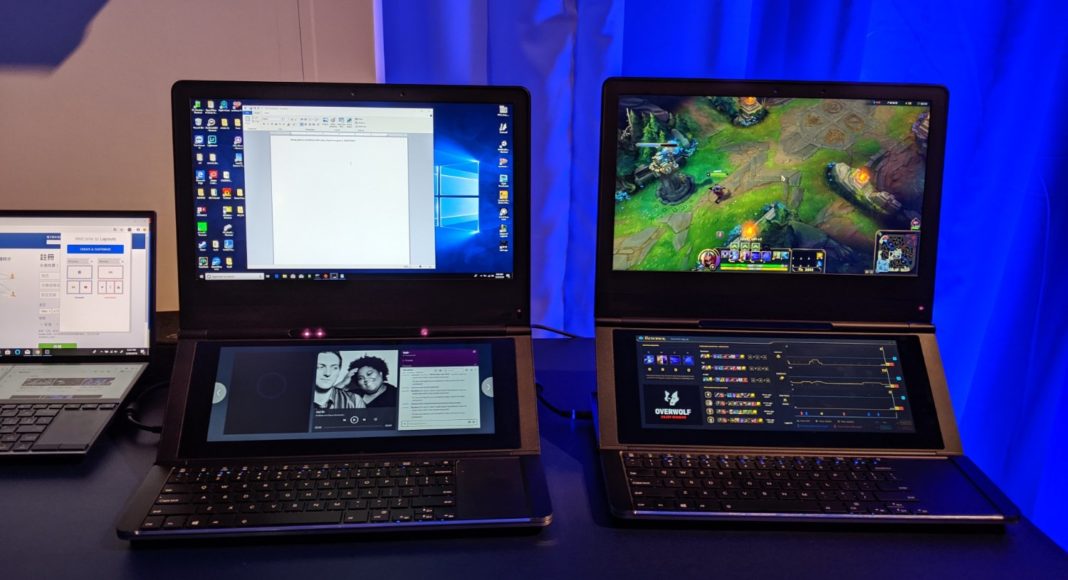 Computex 2019 is mid-way through and all the major brands are launching and announcing their next projects and products at the event. Intel is no exception to this and the company has launched and unveiled multiple products at the event. Most of these products are currently a ‘Prototype’ project which the company is working on but there are some which would be launched for the general consumers sometime later. Now, the company has come up with a new ‘Honeycomb Glacier’ form factor laptop with a secondary screen. It is something similar to the Asus’s ZenBook Pro Duo which was also announced earlier at Computex 2019.

The new laptop uses a secondary hinge which allows the main display to be raised to eye level while the second display which is placed above the keyboard is also raised and inclined for the user to see and use. Intel’s new concept laptop is fully functional and it also comes with features such as eye tracking to automatically activate the window the user is looking at across both the displays. There is also a voice assistant which the user can use to command the device using his voice. Since the secondary display is raised in Intel’s new prototype, it provides more cooling to the device.

Intel’s another concept device comes with a full-sized second display instead of a keyboard or trackpad. It was covered in fabric material and it was designed to feel like a folio. There is a stiff hinge on the device which lets it stand as a regular laptop but it can be opened at varying angles. As the previous model, this model of laptop can be used for multitasking using both the screens. There is also an option to use the secondary display as a keyboard and trackpad as it would be displayed on the second screen itself. But it can also be connected with a Bluetooth physical keyboard. The keyboard is slim in build and can be carried between the screens of the laptop.

Furthermore, Intel also unveiled its new NUC Elements device at the event. This is build on the Compute Card product line which has been discontinued. The device will be a palm-sized module which will have a CPU with Integrated graphics along with memory storage. According to Intel, the NUC Elements will sell the device itself similar to the existing NUC PCs. There will also be accessories released with the device itself such as the docking chassis. The device will come in multiple variants with different CPU, memory and storage configurations. The price details and the availability of the device will be announced sometimes later in the future.

Lastly, the new Optane Memory M15 was also announced by the company at the Computex 2019. According to the company, it provides better power efficiency and performance than the previous generation. It can be paired with Intel 9th Gen Core CPUs. But the pricing, the storage options and other details have not yet been revealed by the company.

Aman Singhhttps://www.gadgetbridge.com/
Aman Kumar Singh has a Masters in Journalism and Mass Communication. He is a journalist, a photographer, a writer, a gamer, a movie addict and has a love for reading (everything). It’s his love of reading that has brought him knowledge in various fields including technology and gadgets. Talking about which, he loves to tweak and play with gadgets, new and old. And when he finds time, if he finds time, he can be seen playing video games or taking a new gadget for a test run.
Facebook
Twitter
WhatsApp
Linkedin
ReddIt
Email
Previous article
Redmi Note 7S, Redmi Note 7 Pro sale in India to be held today at 12 pm IST: Get all the details here
Next article
RedmiBook 14 with 8th Gen Intel Core i7 CPU and NVIDIA GeForce MX250 GPU launched: Price and specifications