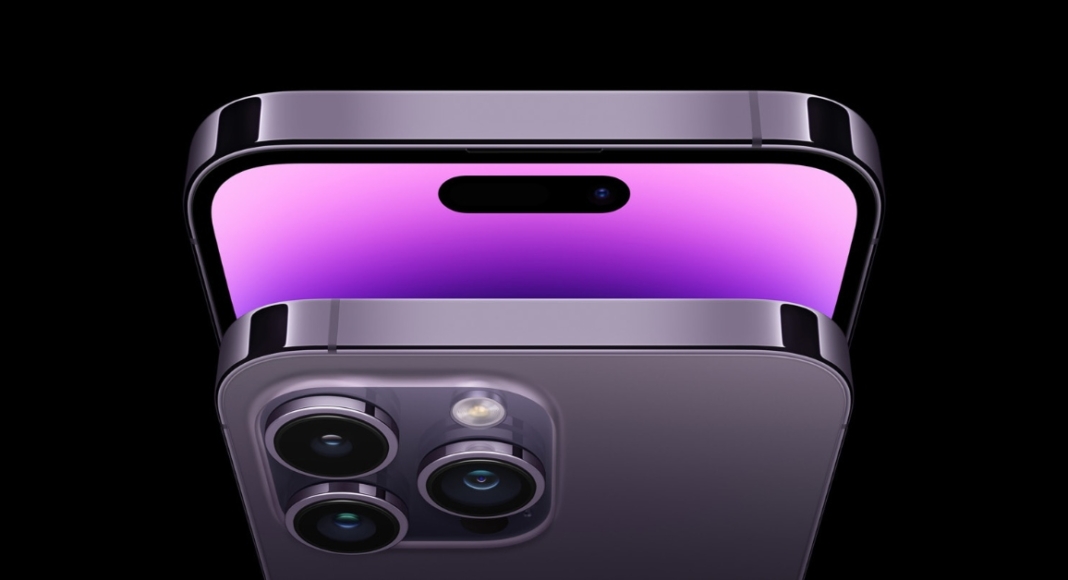 iPhone 14 and iPhone 14 Plus will be featuring 6.1-inch and 6.7-inch Super Retina XDR displays with OLED technology that supports 1200 nits of peak HDR brightness, a 2,000,000:1 contrast ratio, and Dolby Vision. The displays are shielded with a durable Ceramic Shield front cover protection against common spills and accidents with water and dust resistance. 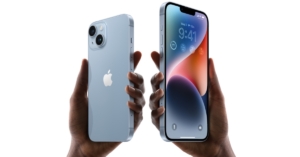 Both the devices feature a new 12MP main camera that has a larger sensor and larger pixels, a new front TrueDepth camera, the Ultra Wide camera to capture more of a scene, and the Photonic Engine for a significant improvement in low-light performance. A new Main camera that has a wider f/1.5 aperture and 1.9 m pixels. While the new front TrueDepth camera comes with an aperture of f/1.9 that improves the quality of images and videos taken in low light. The Ultra Wide camera, provides a distinctive viewpoint for broader views and enhances low-light images using Photonic Engine.

A brand-new “Action” mode has been included that produces remarkably smooth-looking video even while it is being recorded in the midst of intense motion and shaking. Whereas Cinematic mode is now accessible in 4K at 30 and 24 frames per second. End-to-end Dolby Vision HDR is available only on iPhones too.

Both phones are powered by the same A15 Bionic chipset that is available on the previous models. A more secure alternative to a physical SIM card, eSIM enables users to instantly connect to or transfer their existing plans digitally and supports several cellular plans on a single device. For US models, the SIM tray is removed on the iPhone 14 and iPhone 14 Plus, allowing consumers to set up their devices more quickly and simply.

With iOS 16, available on the iPhone 14 and iPhone 14 Plus, customers will experience iPhone in a new way thanks to a redesigned Lock Screen and new communication, sharing, and intelligence features. The wallpaper gallery provides a variety of options for Lock Screen inspiration, such as Apple collections, a Weather wallpaper that allows users to view current weather conditions as they change throughout the day, an Astronomy wallpaper that displays images of the Earth, moon, and solar system, among many other options.

Users can now edit or remember recently sent messages using Messages, and they can mark discussions as unread to return to them at a later time. Sharing a collection of images with relatives is now even simpler thanks to iCloud Shared Photo Library. 10 Visual Look Up adds a new feature that enables users to tap and hold on the subject of an image to remove it from the backdrop and insert it in apps like Messages. Live Text gains the ability to recognise text in the video, swiftly convert currencies, translate text, and more.

The surgical-grade stainless steel and textured matte glass design on the iPhone 14 Pro and iPhone 14 Pro Max comes in four gorgeous hues. Both models, which come in 6.1-inch and 6.7-inch sizes1, include a new Super Retina XDR display with ProMotion that, thanks to a new 1Hz refresh rate and other power-saving innovations, offers the Always-On display for the first time ever on an iPhone. The time, widgets, and Live Activities are kept readily available, making the new Lock Screen even more handy. The display also offers the highest outdoor peak brightness in a smartphone, up to 2000 nits, which is twice as bright as the iPhone 13 Pro, and the same peak HDR brightness level as Pro Display XDR. 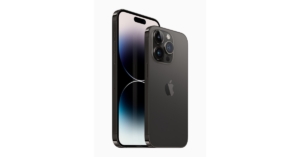 The Dynamic Island opens up new ways to connect with iPhone. The TrueDepth camera has been modified to use less screen space since the release of Dynamic Island. The Dynamic Island keeps the screen in an active state without interfering with content so that users may access controls with just a tap and hold. The Dynamic Island in iOS 16 can be used by third-party apps that offer information like sports scores and ride-sharing with Live Activities while keeping running background activities like Maps, Music, or a timer visible and interactive.

The Pro series includes a brand-new 48MP Main camera for the first time ever with a quad-pixel sensor that adjusts to the image being recorded and second-generation sensor-shift optical image stabilisation. The quad-pixel sensor, which combines every four pixels into one huge quad pixel equivalent to 2.44 m for the majority of photographs, produces incredible low-light capture while keeping photo size at a useful 12MP. In addition, the quad-pixel sensor allows for a 2x Telephoto option, which employs the centre 12 megapixels of the sensor to produce 4K films and full-resolution images without the use of digital zoom. With features like Portrait mode, this provides optical quality at a well-known focal length.

Additionally, iPhone now shoots ProRAW at 48MP with an unprecedented degree of detail thanks to a new machine learning model created especially for the quad-pixel sensor, opening up new creative processes for professional users.

Similar to standard models the Pro variant also includes the new action mode. While the inematic mode, now accessible in 4K at 30 and 24 frames per second. Professional video workflows, such as ProRes3 and complete Dolby Vision HDR are also supported.

Both iPhone 14 Pro and iPhone 14 Pro Max comes equipped with the latest A16 Bionic chip, unlike its other two siblings. It unlocks unmatched experiences like the Dynamic Island, powers all-day battery life, and offers amazing computational photography capabilities. The new 6-core CPU, which has two high-performance cores and four high-efficiency cores, is up to 40% faster than the competition and can handle demanding workloads with ease. A16 Bionic has a new 16-core Neural Engine that can perform approximately 17 trillion operations per second and an enhanced 5-core GPU with 50% more memory bandwidth, making it ideal for graphics-intensive games and apps. The processor uses Apple’s best-in-class fusion architecture to combine efficiency and performance, delivering better performance with less power than the competition.

The whole iPhone 14 lineup debuts the latest safety features that can deliver aid in an emergency when it matters the most. With a new high dynamic range gyroscope and dual-core accelerometer that can detect G-force measurements of up to 256Gs, Crash Detection on the iPhone can now identify a serious auto accident and quickly contact emergency services when a user is unconscious or unable to reach their iPhone. These capabilities expand upon already-existing features like the barometer, which can now detect changes in cabin pressure, the GPS, which provides extra input for changes in speed, and the microphone, which can identify loud noises characteristic of serious auto accidents. Even more, accuracy is provided by sophisticated motion algorithms created by Apple that were honed using more than a million hours of actual driving and crash record data.

When used with Apple Watch, Crash Detection effortlessly takes advantage of each device’s special power to quickly provide people support. When a catastrophic crash is detected, the emergency services call interface will show on Apple Watch because it is most likely to be closer to the user. If iPhone is in range of the best connection, the call will be placed through iPhone.

A new feature of the iPhone 14 series is Emergency SOS via satellite, which combines specialised parts that are tightly linked with software to enable antennas to connect directly to a satellite, enabling messaging with emergency services when cellular or Wi-Fi coverage is not available. Sending a message through a satellite can take minutes because they are moving targets with minimal bandwidth. With Emergency SOS via satellite, iPhone front-loads a few crucial questions to evaluate the user’s position and instructs them on how to point their phone to connect to a satellite because every second counts. The initial survey and any subsequent communications are then forwarded to support offices staffed by Apple-trained professionals who can make support calls on the user’s behalf.

When there is no cellular or Wi-Fi connection, this technology also enables users to manually communicate their location with Find My over satellite, giving them peace of mind while trekking or camping off the grid. Users in the US and Canada will be able to access Emergency SOS via satellite in November, and the service will be free for two years.

Customers can purchase an iPhone 14 for INR 79900 and an iPhone 14 Plus for INR 89900 through Apple Authorised Resellers and apple.com/in/store.

Customers in 30 other nations and regions, including Australia, Canada, China, France, Germany, India, Italy, Japan, Saudi Arabia, Singapore, Spain, Thailand, the UAE, the UK, and the US, will be able to pre-order the iPhone 14 Pro and iPhone 14 Pro Max starting at 5 a.m. PDT on Friday, September 9. The devices will be available starting on Friday, September 16, after which customers can purchase them.

Komila Singhhttp://www.gadgetbridge.com
Komila is one of the most spirited tech writers at Gadget Bridge. Always up for a new challenge, she is an expert at dissecting technology and getting to its core. She loves to tinker with new mobile phones, tablets and headphones.
Facebook
Twitter
WhatsApp
Linkedin
ReddIt
Email
Previous articleApple announces the launch of all new Apple Watch Series 8 and Watch SE: Checkout pricing and features
Next articleLinebet and Melbet Comparison