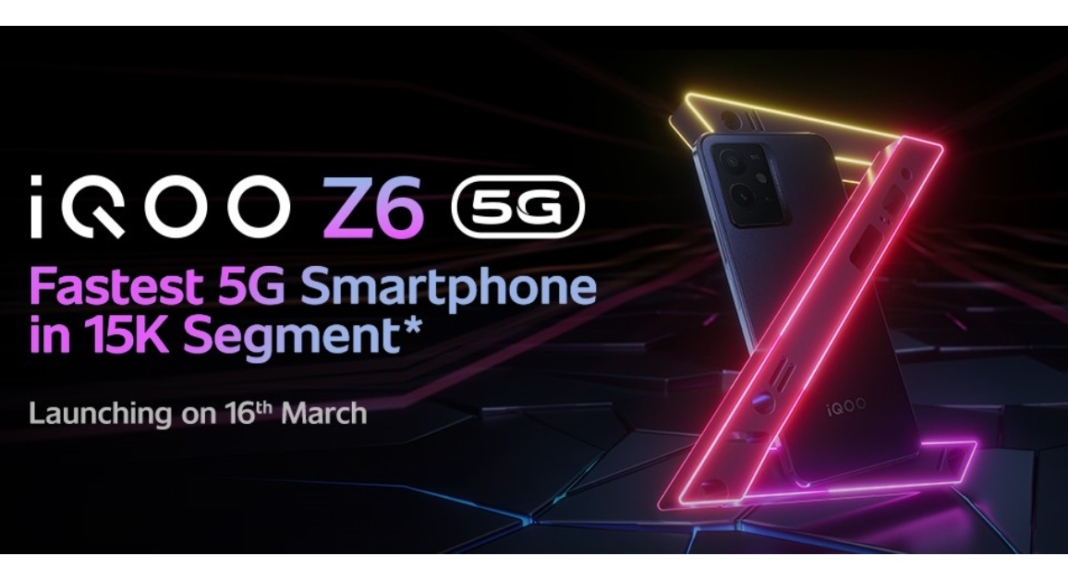 Vivo’s sub-brand iQoo is all set to launch a new smartphone in the Indian market today. The company will be announcing the iQoo Z6 5G which is going to be the successor of the iQoo Z5 5G that was launched last year. The mid-range smartphone will be presented through Amazon and has been listed on the e-commerce platform ahead of the official announcement.

The company is likely to host an online launch event to introduce the smartphone today that will begin at 12 noon. Ahead of India launching the company has revealed some of the key specifications of the smartphone. The iQoo Z6 5G’s pricing has also been hinted at by the company.

According to the Amazon’s listing the upcoming iQoo’s handset is going to be priced between Rs 15,000 to Rs 18,000 pricing range. Previously the upcoming device was tipped to be the fastest 5G smartphone under Rs 15,000 price segment.

The special page previews the next phone’s major specifications. The smartphone will be powered by a Snapdragon 695 SoC and an unspecified amount of LPDDR4X RAM. It will also include a 6.58-inch display with a refresh rate of 120Hz and DCI-P3 colour gamut support. The iQoo Z6 5G will also incorporate a five-layered liquid cooling system for thermal control, according to the company. While playing CPU-intensive games, this decreases the surface temperature of the smartphone by around 3 degrees and the CPU temperature by about 10 degrees, according to the company.

According to the dedicated microsite, the iQoo Z6 5G has an AnTuTu benchmark score of 4,10,563 points, which is more than the 3,92,543 score of a smartphone powered by a Snapdragon 750G CPU. The device is expected to include 8GB of RAM, which can be increased to 4GB using the virtual RAM 2.0 capabilities.

The smartphone has a glossy black appearance. It appears to feature a flat border with a fingerprint sensor on the right side of the frame. A rectangular camera module with what seems to be a triple camera arrangement, a flash, and 5G branding is present. The iQOO Z6 5G camera sensor specifications are still unknown. It is believed to include a 50MP or 64MP primary camera sensor at the very least. The device’s bottom end is also imprinted with iQoo.

Komila Singhhttp://www.gadgetbridge.com
Komila is one of the most spirited tech writers at Gadget Bridge. Always up for a new challenge, she is an expert at dissecting technology and getting to its core. She loves to tinker with new mobile phones, tablets and headphones.
Facebook
Twitter
WhatsApp
Linkedin
ReddIt
Email
Previous article
Amazon Quiz Answers Today 16 March 2022: Participate to win Rs 10,000
Next article
New Gerua Colour Edition for the Ola S1 Pro electric scooter announced