The non-pro variant was announced in the country in March of this year. 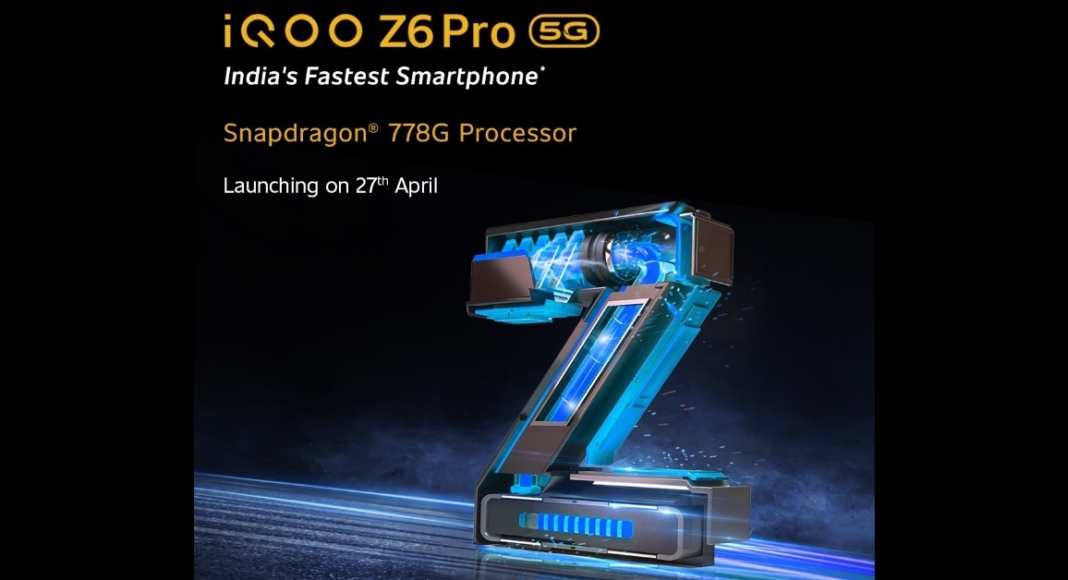 iQoo Z6 Pro 5G is all set to launch in India on April 27. The device is also confirmed to be available via Amazon in the country. The handset is confirmed to feature a 67W FlashCharge and is going to be powered by Qualcomm Snapdragon 778G SOC. According to the company, the handset will include the company’s VC liquid cooling technology. It is also said to have the highest AnTuTu benchmark score of over 5,50,000.

In India, the iQoo Z6 Pro 5G will be released later this month. The launch will take place in the country on April 27. In addition to the launch date, the company has also dropped hints about the price of the iQoo Z6 Pro 5G. The iQOO Z6 Pro 5G is expected to cost less than Rs 25,000. According to iQOO, there has been an increase in demand for smartphones that provide a fast and seamless gaming experience as interest in smartphone gaming has grown over the last few years.

The iQoo Z6 Pro 5G was recently seen in a hands-on video. The upcoming smartphone appears to have an OLED display with a refresh rate of 90Hz and a peak brightness of 1,300 nits. The Snapdragon 778G SoC will be used, along with Qualcomm’s VC liquid cooling technology. A 64-megapixel primary camera, an 8-megapixel ultra-wide camera, and an unspecified macro camera are also expected to be included in the handset. The smartphone appears to have a USB Type-C port but no headphone jack, according to the hands-on video. Whereas the iQoo Z6 Pro 5G’s battery capacity has yet to be disclosed but it has been confirmed that the device will support 66W FlashCharge.

To recall last month, iQOO released the iQOO Z6 5G, a non-Pro model in the country. it was announced at a starting price of Rs 15,999 which goes up to Rs 17,999. The phone comes in two colour options of Chromatic Blue and Dynamo Black.

A 50-megapixel Samsung ISOCELL JN1 sensor with an f/1.8 aperture is included in the triple rear camera array. A 2-megapixel macro sensor and a 2-megapixel bokeh lens are also included in the camera setup. The bokeh camera, on the other hand, is only available on the 6GB and 8GB models, according to the company, and not on the base 4GB model. On the front of the iQoo Z6 5G, there is a 16-megapixel Samsung 3P9 selfie camera sensor with an f/2.0 aperture. The 5,000mAh battery of the iQoo Z6 5G supports 18W rapid charging.

Komila Singhhttp://www.gadgetbridge.com
Komila is one of the most spirited tech writers at Gadget Bridge. Always up for a new challenge, she is an expert at dissecting technology and getting to its core. She loves to tinker with new mobile phones, tablets and headphones.
Facebook
Twitter
WhatsApp
Linkedin
ReddIt
Email
Previous articleAmazon Quiz Answers Today 18 April 2022: Participate to win Rs 15,000
Next articleSamsung Galaxy M53 5G set to launch in India on April 22: What to expect