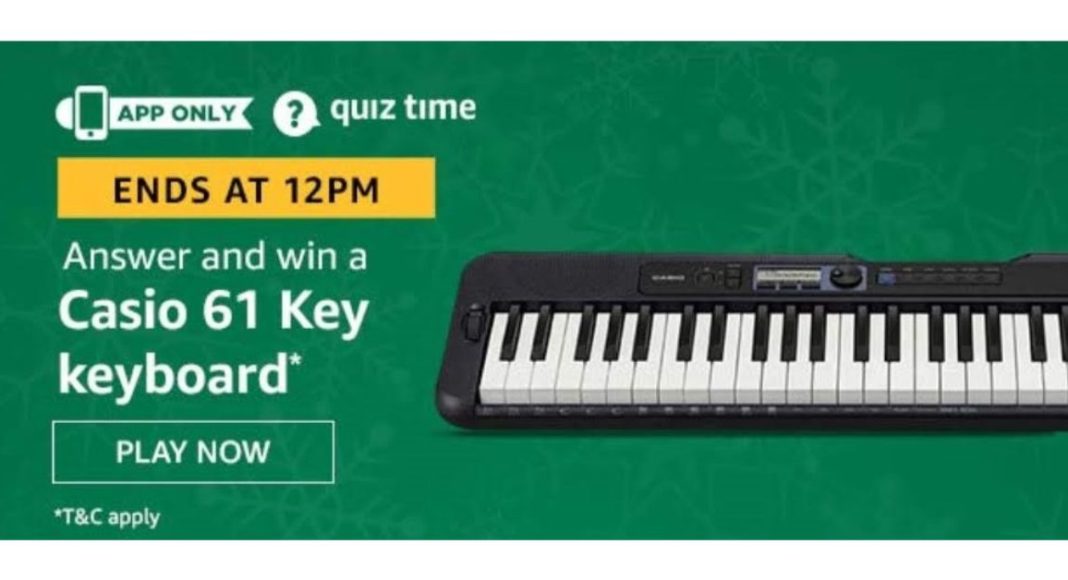 The e-commerce platform Amazon is back with another set of new questions today. Every day it brings a fresh Amazon Quiz for its customers that gives them an opportunity to win exciting prizes. You can play the quiz from 8 AM to 12 noon every day on its mobile app platform. Today Amazon Quiz gives you a chance to win Casio 61 Key Keyboard.

The winners will get a chance to win gadgets, mobile phones and even Amazon Pay balance and other prizes such as iPhone X, iPhone Xs, Seagate HDD, GoPro Hero 8 Camera, LG Smartphones,  Bose Sound Touch 20 Speakers, OnePlus 7T among others. Millions of people are participating in the quiz from different parts of the country to win such gift items.

The quiz is not available for the desktop platform you can only participate in the quiz from 8 AM to 12 noon via mobile app only. The Amazon Quiz contains five easy questions based on general knowledge and current affairs. After giving all the correct answers to the question you will get shortlisted for a lucky draw to select a winner. The results will be announced at the end of the month.

Question 1: For which film did veteran filmmaker Basu Chatterjee, who passed away on June 4, 2020, win a National Film Award in 1992?

The answer is- Durga

Question 2: Kazatomprom from Kazakhstan is the world’s largest producer and seller of what naturally mined item?

The answer is- Uranium

Question 3: Which Indian Prime Minister, during a visit in 2000, had inaugurated Mahatma Gandhi’s statue outside the Indian Embassy in the USA?

The answer is- Atal Bihari Vajpayee

The answer is- Google

Question 5: Which Indian company made two new additions ‘Dahlia’ and ‘Lily’ to their Bloom fan series in June?

The answer is – Usha

Komila Singhhttp://www.gadgetbridge.com
Komila is one of the most spirited tech writers at Gadget Bridge. Always up for a new challenge, she is an expert at dissecting technology and getting to its core. She loves to tinker with new mobile phones, tablets and headphones.
Facebook
Twitter
WhatsApp
Linkedin
ReddIt
Email
Previous article
Sony WH-CH710N wireless active noise-cancelling headphones launched in India
Next article
5 best printers under-Rs 15,000 category to boost work-from-home productivity