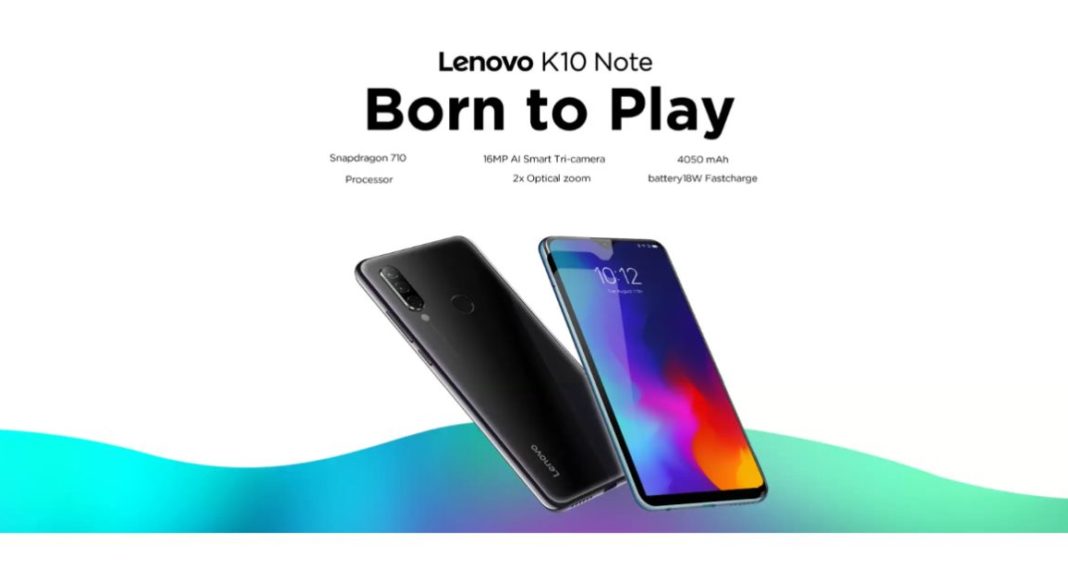 The Chinese smartphone maker Lenovo today launched the Lenovo Z6 Pro, K10 Note, A6 Note smartphones in India. The company launched the long-awaited K10 Note in the Indian market for the first time. The Chinese brand that is also known as the owner of the Motorola already ready revealed that it will be launching the trio in the country. However Lenovo Z6 Pro was already in the Chinese market earlier this year but now the smartphone has arrived here too. The launch event was held in New Delhi today

Lenovo K10 Note will come with a 6.3-inch dewdrop notch display with 90 per cent screen-to-body ratio along with 19.5:9 aspect ratio. The device is powered by Qualcomm Snapdragon 710 processor. The newly launched smartphone will be housing a massive 4050mAh battery with support for 18W fast charging.

The handset will come with a rear fingerprint sensor, Dolby Audio, and a USB Type-C port. The Chinese company will be offering the phone in two colour options Knight Black and Stardust Blue colours.

the Lenovo A6 Note will be featuring a 6.09-inch HD+ screen with 88 per cent screen-to-body ratio, 19.5:9 aspect ratio. The display will come with a waterdrop-style notch. The handset will be powered by MediaTek Helio P22 SoC. A6 Note will be housing a 4,000mAh battery with support for 10W fast charging.

Lenovo A6 Note will be sporting a dual rear camera set up that consists of a 13-megapixel camera and a  2-megapixel  camera On the front it has a 5-megapixel selfie camera.

Lenovo A6 Note will come with security features like fingerprint sensor and Face Unlock support. The device will be available in two colour variants Black and Blue.

Lenovo Z6 Pro comes with a 6.39-inch Samsung AMOLED FHD+ display and has waterdrop notch. It is powered by 2.84GHz Qualcomm Snapdragon 855 processor with Kryo 485 CPUs along with Adreno 640 GPU. Z6 Pro runs on Android 9 Pie with Lenovo’s ZUI 11. It houses a 4000mAh non-removable battery with 27W super-fast charging.

In terms of camera, the Lenovo Z6 Pro comes with a quad rear camera setup that houses a 48-megapixel  primary Sony IMX586 sensor, a 2-megapixel  depth sensor along with 16-megapixel for ultra-wide-angle and an 8-megapixel sensor for telephoto zoom photos. The ultra-wide-angle camera has an ability to click pictures with a 123-degree field-of-view. On the front, it has a 32-megapixel camera that supports the face unlock feature.

Komila Singhhttp://www.gadgetbridge.com
Komila is one of the most spirited tech writers at Gadget Bridge. Always up for a new challenge, she is an expert at dissecting technology and getting to its core. She loves to tinker with new mobile phones, tablets and headphones.
Facebook
Twitter
WhatsApp
Linkedin
ReddIt
Email
Previous article
Lenovo K10 Note, Lenovo A6 and Lenovo Z6 Pro to launch today in India
Next article
Compare: Lenovo K10 Note and Redmi Note 7 Pro