Both the portable projectors come with built-in batteries.

ViewSonic, a California based visual solution provider today announced the launch of portable LED projectors in India today. The company has introduced ViewSonic M1_G2 and M1+_G2 Ultra-Portable LED Projectors that come with upgraded features over its predecessors. Also, both the LED projectors have received the iF Design award and come with 300 LED lumens delivering a convenient, enjoyable entertainment experience. Additionally, these are powered by a power bank so that the focus performance of the projector is stable.

Commenting on the launch Mr Muneer Ahmad, AV Head, ViewSonic India said, “We have received an overwhelming response for our M1 and M1+ series projectors in the Indian market as well as the global market. With upgraded features and innovations, we have developed the newly launched projector which is a successor of M1 and M1+. We are excited to expand the award-winning M series bringing the magnificent experience to our end-users delivering a big-screen cinematic experience at home or wherever they go. We are expecting to gain similar momentum as we observed for our earlier M- series projector,” 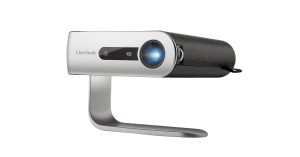 Coming to the specifications the ViewSonic M1_G2 Ultra-Portable LED Projector equips an in-built battery. It is stated to have an LED light source for up to 30,000 hours. It can be used both indoors as well as outdoors because of its portability. It comes with a smart stand that enables a simple 360-degree setup which also doubles up as a lens cover. The speakers are fine-tuned by Harman Kardon for an amplified audio experience, while a 1.2 throw ratio enables you to go big even in small spaces.

On the other hand, the much expensive ViewSonic M1+_G2 Ultra-Portable Smart LED Projector also includes a built-in battery to provide portability. It has an LED light source with up to 30,000 hours of lifespan and can deliver big-screen entertainment both inside and outdoors. Similar to its sibling it comes with a smart stand that also doubles up as a lens cover. It also boasts stereo speakers powered by Harman Kardon.  Apart from all this, the projector offers Wi-Fi connectivity. There is a USB Type-C connection as well to stream videos and facetime your friends by allowing you to project content directly from your phone, laptop, or tablet.

Komila Singhhttp://www.gadgetbridge.com
Komila is one of the most spirited tech writers at Gadget Bridge. Always up for a new challenge, she is an expert at dissecting technology and getting to its core. She loves to tinker with new mobile phones, tablets and headphones.
Facebook
Twitter
WhatsApp
Linkedin
ReddIt
Email
Previous articlePrice Drop: Samsung Galaxy F62 price now starts at Rs 17,999
Next article6 August 2021 Amazon Quiz: Answer all the questions to win Rs 25000 Amazon Pay Balance