HomeOther TechAppsMark Zuckerberg announced the release of WhatsApp Reactions, to include a total...

Mark Zuckerberg announced the release of WhatsApp Reactions, to include a total of 6 emojis

The WhatsApp users will be able to react to a particular message with emojis similar to Telegram. 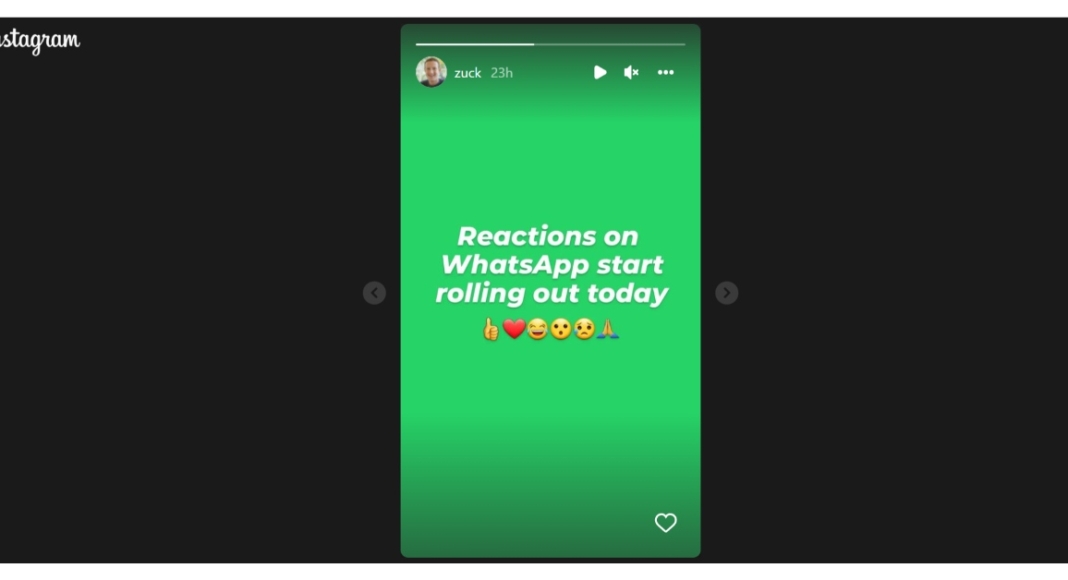 Meta owned instant chatting app WhatsApp has released WhatsApp reactions allowing users to instantly respond to messages with an emoji. The company is initially rolling out six emojis like, love, laugh, surprise, sad, and thanks. Note that similar features are already available on other messaging platforms like Instagram, Slack and Telegram.

WhatsApp Reactions will be available as the company has begun rolling out the features to all the users. The news comes by way of an Instagram story posted by CEO Mark Zuckerberg. As previously stated, there will be only six WhatsApp Reactions at first, which Zuckerberg also mentioned in his story.

The WhatsApp Reaction was previously under beta testing and the company’s CEO also teased the upcoming feature last month. The WhatsApp message reactions were first seen testing on Android and iOS for months last year. WhatsApp appears to be working on bringing message reaction capabilities to the desktop client in a new development. But in March the company rolled out the 6 new message reactions in beta and limited users are allowed to respond to messages with new emoji reactions on WhatsApp.

As we said earlier users will receive six emoji reactions such as Like, Love, Laugh, Surprised, Sad, and Thanks.

Moreover, according to the latest report, WhatsApp is tipped to allow WhatsApp Reactions users to use any emoji, GIF, or sticker in the messenger. When users tap the plus button in the latest version, they should be able to access the entire emoji keyboard.

Last month WhatsApp Communities was also announced by Meta Users will be able to join multiple groups and receive updates from all of them on a single screen, eliminating the need to scroll through multiple chats. People can easily form smaller discussion groups around topics that are important to them, and receive updates that are broadcast to the entire Community. Administrators will have access to a number of new features, including the ability to send out mass announcements and the ability to control which groups are allowed to join communities.

Furthermore, WhatsApp has increased the file sharing limit, added reaction, and added the ability to make group audio calls with up to 32 people at once.

Komila Singhhttp://www.gadgetbridge.com
Komila is one of the most spirited tech writers at Gadget Bridge. Always up for a new challenge, she is an expert at dissecting technology and getting to its core. She loves to tinker with new mobile phones, tablets and headphones.
Facebook
Twitter
WhatsApp
Linkedin
ReddIt
Email
Previous articleHow Cryptocurrency Is Changing Online Gaming Industry
Next articleTop 10 Best Watermark Free Video Editors for Android In 2022